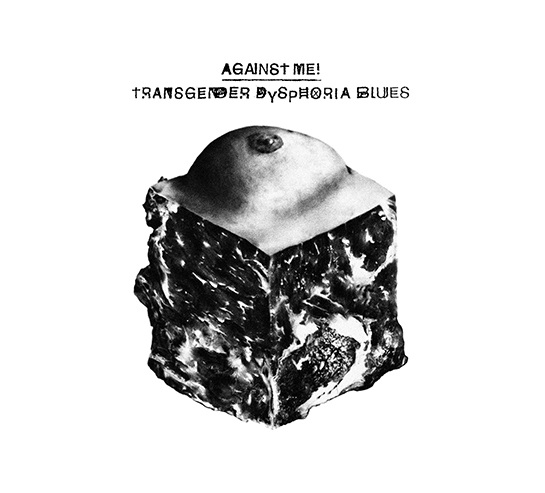 Against Me!’s five previous albums have a tendency to draw sharp lines between fans of the ragged folk-punk sound of early albums such as “Reinventing Axl Rose” and the slicker, more tightly-produced riffs on the more recent “New Wave” and “White Crosses”. The bands newest release, “Transgender Dysphoria Blues”, just might manage to bridge the gap between the two camps. This would be cause enough for celebration even if it didn’t also demonstrate the band’s resolve to play on after losing longtime bassist Andrew Seward. Most crucially, it serves as frontwoman Laura Jane Grace’s coming-out party after announcing in a 2012 Rolling Stone article that she would be living and performing openly as a transgender woman.

From the booming drum roll and jaunty guitar lines of the eponymous opening track, Grace sells the hell out of every second of the album. The band’s sound is as big and bold as it’s ever been, but the distinctly rougher, more ferocious tone this time around allows “Blues” to truly live up to its name. While originally pitched as a concept album in the days when Grace wasn’t comfortable discussing her gender identity with even her own bandmates, the stories it tells are unquestionably hers. Songs about depression, alienation, and feeling crushed by the system are common punk fare, but the uniquely personal edge of the subject matter, combined with Against Me!’s signature howled vocals and blunt lyrics, allows these tropes to never feel recycled. “You want them to notice the ragged ends of your summer dress/ You want them to see you like they see any other girl/ They just see a faggot” Grace roars, practically daring detractors to argue that an entire album about claiming a feminine identity can’t also be punk as fuck.

“Blues” charges through its 29-minute runtime with similar fervor, but all that energy often belies truly bleak subject matter. The topic of death surfaces frequently in the lyrics, either as a potential escape from the pain of dysphoria or as a grim certainty, and the album makes little effort to dull the existential dread. The songs that confront (or even welcome) death are among the album’s strongest, from the bitterly lonely ‘True Trans Soul Rebel’ to the haunting, acoustic ‘Two Coffins”. Certain other songs, however, may not be strong enough to stand on their own. When listened to outside the context of the full album, pieces like ‘Drinking with the Jocks’ and ‘Dead Friend’ verge on being so much sound and fury, signifying nothing.

As pain and eventual oblivion are unavoidable, the album argues, the only thing to do is live as honestly as possible. “Black Me Out”, the album’s titanic closer, captures Grace’s exhaustion with living her life according to others’ standards. It’s as close as “Transgender Dysphoria Blues” gets to an upbeat conclusion, whose message is echoed not just in the lyrics but also as a reflection of the entire album. After years of embedding allusions to her inner turmoil in seemingly throwaway lines of other songs (most blatantly in 2007’s “The Ocean”), Grace can finally sing about them openly. By wearing their hearts on their sleeves, Grace and Against Me! have created their strongest album in years.