RAW FROM THE SAW: Business Casual 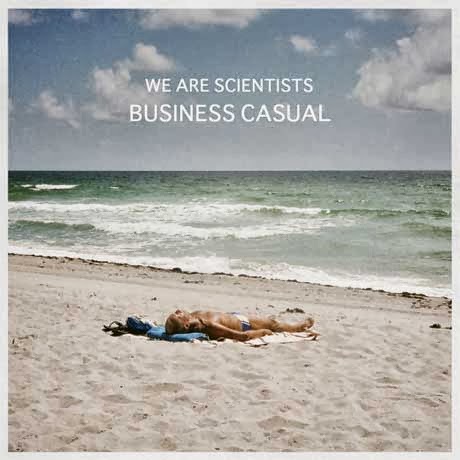 We Are Scientists keeps things rolling with Business Casual, picking up right where they left off with Barbara a little over three years ago. The songs stay simplistic, if not layering-wise, then lyrically and instrumentally, taking advantage of repetition without going overboard. The only striking difference is the sadder, more regretful tone of the songs as a whole. Nearly every song eventually bursts into a raging guitar solo, though it’s never out of place, but instead tailored to the unique and individual sound of each track. The EP starts out in a dizzying, thick guitar riff with light feedback, and mellows as it drifts off ending with a soothing slide guitar riff that rambles on into exhaustion.

“Dumb Luck” is the first song on the EP. Keith Murray and Chris Cain play up some sweet harmonies at an interval just distant enough to give the vocals a bit of dimension. A rough, repeating guitar riff forms the backbone of the song as keyboards, drums, and vocals are blended in with it. Eventually the sound does transform and fade in and out, braking from its pattern and taking a solo or two. It’s without a doubt the most upbeat song on the album.

The descent into the slower tempo starts with “Return the Favor.” Even Murray slows down the vocals with this one, letting a few notes in the verses and end of the chorus turn into a quiet howl. The kick drum attempts to overpower the slowing of the vocals with its consistent poppy beat. The tempo is picked up for a second as a guitar overwhelms the almost turtle-paced vocals for a few before slowing down again and ending the song. This slow, lazy feel is continued in “Good Answer.” The repetitive riffs put more of a focus on the lyrics and their delivery, which is still slowed, but not as much as “Return the Favor.” The lyrics carry the same regretting and melancholy tone as the melody.

The penultimate song on the ep is a demo called “Courage.” The vocals are poorly recorded and not very clean, which is to be expected of a demo. The only other component of the track is an acoustic guitar, strumming a few chords. The fact it’s a demo reinforces the raw feeling of this short song, which only demos and acoustic versions can capture. It also clearly expresses the unfinished emotion and thoughts of the narrator of its story, which a full band, fully mixed track might bandage too much.
The rest of the band returns to finish the album off with a cover of Berlin’s “Take My Breath Away.” Starting with a very manufactured-sounding drum, which is accompanied by what sounds like a slide guitar, the song has a very standard vacation feel, a postcard-perfect trip to Hawaii.

Overall, Business Casual contains a very emotion filled set of songs, steering away from classic We Are Scientists sound with a slower, sadder tone. Still, just about any of the songs can be mixed smoothly into a playlist of other alternative bands ranging from Tokyo Police Club to Arctic Monkeys, or even Motion City Soundtrack. Refraining from changing too drastically over the years, We Are Scientists does not disappoint with this five-song EP.