Healthy Living in College: Is that even possible? Let’s start out with a standard open-ended question.

You’re in college. Not just a college, but a college in a city that boasts more restaurants per capita than New York City. It is a foodie’s dream. Not to mention, you’re in college. The appeal of Ramen and Easy Mac looms over your head, despite having a full kitchen in which the possibilities are endless. What do you do?

For most college students, the answer is easy. Ain’t nobody got time to cook. For some, it’s the meal plan that gets them. Endless food, no matter what the quality is. For others, it’s the easiness of a 3-minute meal.

And don’t even get me started on working out. Sure, theoretically you can convince yourself that walking from Smiddy to Park and then to Friends and back is enough of a workout. You can lament over how you “would go to the gym if I had the time.” Wouldn’t we all…

Now, obviously I’m generalizing. But I’m generalizing because I’ve been there. I’ve sat on my couch and cursed my roommate for bringing back a back of candy, but did I stop myself from eating six or seven? I’ve stared at my body for hours thinking how I need to do some crunches or leg lifts or something, but have I dragged my butt over to the fitness center? I’d venture a guess and say my plights is all too common.

I decided to start this blog partially because we needed another weekly blog, but also because of something I saw on Twitter/ Buzzfeed this week. Someone thought it would be funny and “motivational” to make #FatShamingWeek a real thing. Some of these gems include:

Now, I truly believe there is something inherently wrong with the notion that we must perpetuate obesity as a state of life. It’s unhealthy to be obese. That’s a scientific fact.

But instead of telling men and women that they need to be one “perfect” body or kill yourself, maybe we should be encouraging them that they should be leading a healthy lifestyle, both physically and mentally. The body that comes with that is perfect, whether it is slender, curvy, athletic, or otherwise. Just because you force yourself into this conceived notion of “beautiful” does not mean you’re healthy. And that’s what we should be trying to fix. Not what girls look like, but how they look like it. (Side note: Some people naturally fit into this “ideal” archetype, and there is nothing wrong with that. I’m not trying to be someone who says you can’t be slender, I’m just saying not everyone is built that way, and that’s okay.)

I take offense to this fat-shaming trend because I lived it. My life was a series of fat shaming by myself, by my schoolmates (both intentionally and otherwise) and by every “ideal” woman I saw in the media. In seventh grade, my best friend told me she thought I “would be pretty if I lost weight.” I’m sure now, she would never admit to, or even remember saying that, but I’ll never forget it. It was the first time I had taken a look at myself and genuinely hated what I saw.
Over time, my friend developed several eating disorders. She went through different phases of anorexia and bulimia, always to different extents. She would collect pictures of beautiful, thin models and collage them in a journal, which she titled her “THIN-sporation Book.” She even recommended to me that I make one myself.

I felt really bad about myself for a long time. A side effect of my weight struggle was being critical of every micro-flaw I could find. Every morning I would wake up and say “your nose is too big, your hair is too flat, your chin looks weird, there’s nothing special about you that is good.” That’s a really shitty way to start your day off.

I tried to count my calories. I tried to work out to the point of utter exhaustion. But in the end, I was always like…I really just want some bagels. Or a pizza. #jerseygirl.

It took me years to figure out that it’s not what I looked like, but how I treated myself that made the biggest difference. Making small changes can make a huge difference.

So ladies, listen up. You’re beautiful whether you’re 5’3 or 6 feet tall, 115 or 160, straight, gay, trans, and anywhere in between and outside those dimensions. If you’re living a healthy lifestyle, you’ll realize it too. And I may not be a nutritionist, therapist, or health expert, but being healthy does not mean you have to eat a salad with no dressing (or as my father affectionately calls it, “rabbit food”) and drink nothing but ice water for three meals a day. Trust me when I say you can have your cake and eat it too-literally! If you’re conscious of what you’re eating, and of how you see yourself, the rest will come with it.

So two cups of green tea an essay later, I start this blog, because my journey is far from over. I’m happy with the way I look, but I know that I could be eating and living healthier. I’m going to try and set the collegiate example and be the change I want to see in the world. The right way. The healthy way. 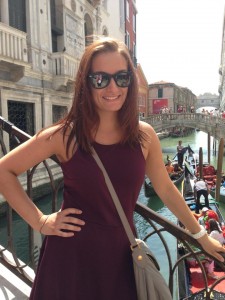 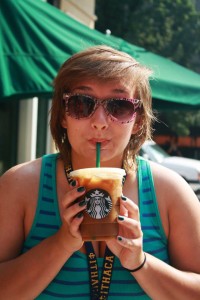