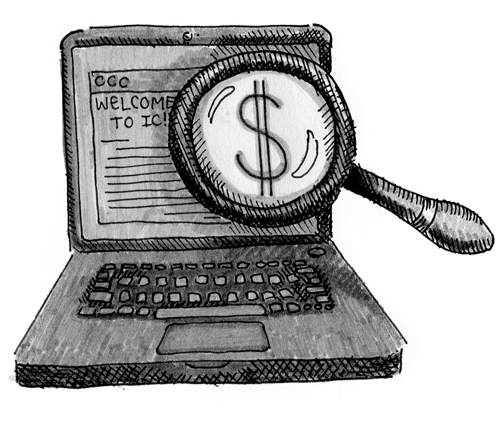 Remember when it seemed like the whole campus was ticked off about that media policy last year, coupled with the bureaucratic snub by the administration in their hiring of a very costly consulting company without announcing it for months? While much of that seems to have died down now, the results of the Huron Consulting Group’s recommendations are now being implemented, and the president’s plan to achieve the college’s “under 3/over 3” goal will be further solidified in the coming academic year. While some small changes were put into effect over the summer, many more are to come and in some cases how they’re rolled out is still to be determined.

Ithaca College President Tom Rochon sent an email to students on August 28 alerting them to some of the changes that were implemented over the summer. The letter briefly mentioned the different tweaks, but didn’t delve into what they really meant, or what the ongoing process is going to be. So how open has the president been in discussing the changes, and where is the college going from here? If you didn’t pay much attention last year, forgot, or are new to IC, here’s a review of the main changes that were implemented and those that were not taken up due to resistance from the campus community or other reasons:

The recommendations for a $10 flat fee for a visit to the health center weren’t implemented, and neither was the sliding fee for student parking permits. According to Provost Marisa Kelly, the recommendation to charge staff for “parking was going to be this year and got delayed until next year.” Due to the larger-than-expected freshman class it was an “easy kind of trade off” for the college to make after faculty had expressed displeasure at that prospect.

The Rochester Center for the physical therapy program will be relocated to the IC campus, although many of the details for this still have to be ironed out.

According to Kelly, who also co-chaired the Institutional Effectiveness and Budget Committee last year, the main cost-savings for the college this year have come from implementing new operational strategies. By buying larger quantities of supplies that the college needs regularly, they were able to save money and renegotiate the deals they already had.

Why is the college doing all of this? Where did all these budgetary problems come from?

It’s a basic problem if looked at in the right way. Tuition increases have been over four percent most recent years, and the college wants to lower that while maintaining employee compensation and not slashing individual departments or budgets. Unless the president and all the other administration officials volunteer a huge pay cut, the college “must annually find some combination of alternative revenue or expenditure savings in the amount of approximately $1.5 million,” as Rochon’s letter put it.

The president has set a plan to achieve what he’s coined the college’s “under 3/over 3” goal. The “under 3” refers to yearly tuition increases and the college’s “commitment to reduce the annual rate of tuition, room and board cost increases to approximately the rate of inflation.” The “over 3” refers to keeping employee compensation at or above 3 percent to ensure that the college continues to attract quality faculty.

Warren Schlesinger, associate professor and chair of the accounting department said that “the president and the provost have certainly made an effort to have listening sessions and dialogue with the faculty and the students.” Schlesinger has served on the faculty council for a number of years, and says the college is undergoing far more change at a faster pace than any time before in his 31 years here.
The move of the physical therapy program’s Rochester Center has been one of the most controversial actions taken in response to the recommendations, as many PT students and professors feel that their experience will be vastly different and inferior.

Kelly said she understands why it’s controversial, especially because it’s “the only recommendation that really had educational consequences to it in a very direct way.”

Still, the college has plans to build a movement analysis lab and a cadaver lab on campus (the two most fundamental components of the PT program that don’t exist on campus), and the president and provost believe the quality of the program can be replicated on IC’s campus. As with other recommendations, the specifics haven’t been announced yet. Dominick Recckio, a sophomore Communication Management and Design major, and Vice President of Communication for the SGA, said he’s heard from physical therapy students that there is concern whether students will still be able to work on cadavers two or three at a time, or will be in large groups, or watching professors do it, and that he has yet to hear a response from the administration in regard to that.

Overall, Recckio believes the college listened to last year’s student demands, and is looking to approach the coming year with a disciplined yet open mind. “We’re gonna listen … and see where the college is headed,” he said. “Before we tackle specific issues, we want people to believe in what SGA can do.”
Recckio is also optimistic about the SGA’s ability to engage the student body in new ways this year. He wants to use interactive polls and face-to-face contact more than traditional email or Facebook connections. The normally low turnout for online polls on these issues “proves there’s something about the campus culture that needs to be fixed,” Recckio said.

The reality of the situation is that college education as a whole is undergoing massive transformation, and the college must operate within the scope of larger trends.The changes for IC are the “college’s response to trying to reign in the the cost of higher education,” Kelly said.

Schlesinger said that the college “should be sensitive to the fact that some people may lose their jobs.” He added that “looking at some of these things does make sense, but it’s disruptive.”

But those “disruptions” irritate the college’s students and faculty; inconvenience is a hard thing to bear when you don’t experience the benefits. And so far, the benefits are not tangible––and most of them won’t be for some time.