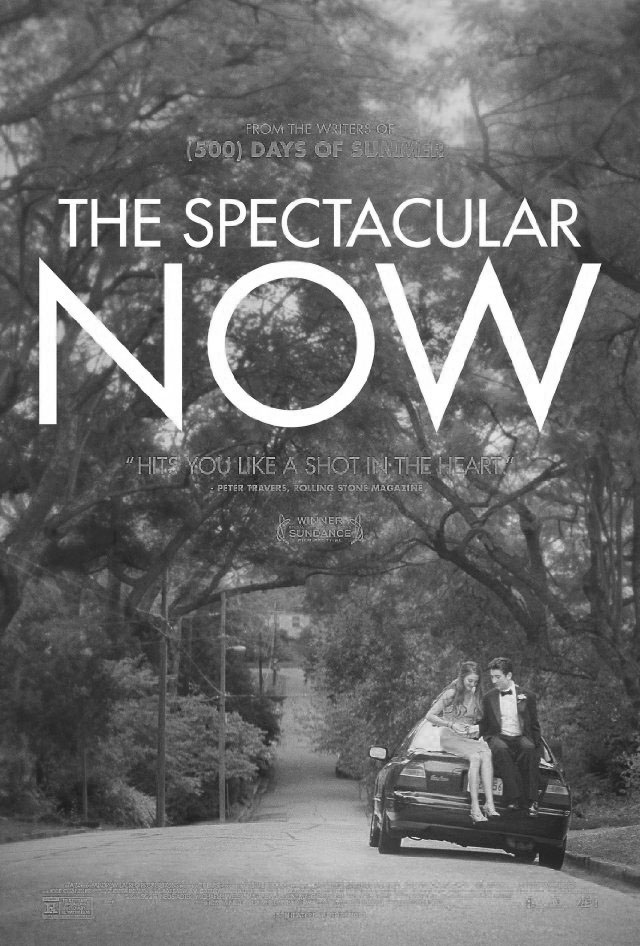 The Spectacular Now, directed by James Ponsoldt, captures senior-year-of-high-school nostalgia in a way that sounds like a classic 80’s coming-of-age film, but carries a lot more depth.Starring Miles Teller and Shailene Woodley, the story shows the crazy side of high school– the parties, the rebellion, and the idea that real life is very far away– along with all the drama of falling in love, growing up, and the challenges of leaving home for the first time.

Cool-dude Sutter Keely (Teller), a budding alcoholic who always has a flask on him lives– and parties– in the moment, but changes his perspective when he wakes up hungover on the front lawn of the quiet, sci-fi geek Aimee Finicky (Woodley). An unlikely romance buds as they help each other deal with their issues, including an alcoholic father, a needy mother who doesn’t want her kid leaving home, and a burning desire to stay in the present. The two main characters might resemble typical high school stereotypes, but they both deal with realistic issues in such a way that goes against high school clichés.

This movie is not what it’s presented to be, and contains several unexpected twists. Perhaps predictably, Sutter gets Aimee out of her comfort zone by going with her to football games and hanging out with more friends, and Aimee helps Sutter out of his constant partying and disregard for success. But both of the main characters have dark sides, and both mature over the course of the film. A genuine, romantic sex scene between Sutter and Aimee also helps tie the characters’ bond deeper. The story line is unlike any other with unexpected plot twists, and fans are pleased at how well it followed the original book, written by Tim Tharp.

Teller is a new face on the cinema scene, and he portrayed Sutter in a fantastic way, making viewers hate him one minute and love him the next. His happy-go-lucky attitude shifts into something more sensible, which gives his character more depth. Many will recognize Shailene Woodley from The Descendents and The Secret Life of the American Teenager. Her aura of maturity at such a young age makes her perfect for the role of Aimee. Their connection is undeniable, making them a couple you want to root for. The ‘popular guy falling for the nerd’ love story platform that the story is based on expands into a heart-wrenching tale of facing reality. The Spectacular Now is a wonderful coming of age movie to laugh at, cry through, and learn from.
– Jacqueline Matza