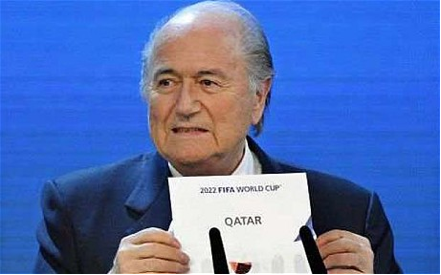 FIFA Sweats A Hot Mistake On and Off the Pitch

About two weeks ago, something fairly unusual happened in the world of sports that didn’t receive much attention from the mainstream American media: the head of the world’s largest sport admitted he “made a mistake.”

And no, it wasn’t Roger Goodell, David Stern or Bud Selig, for those of you United States-centric sports fans. It was Sepp Blatter, the president of FIFA – soccer’s international governing body – who reflected that awarding the 2022 World Cup to the Middle Eastern country of Qatar perhaps wasn’t the greatest idea and that (surprise!) the decision was influenced by politics.

The reason they awarded Qatar the tournament, according to Blatter, was to expand the appeal of the World Cup.

“The World Cup is FIFA’s biggest, if not only, global event. Who are we, the Europeans, to demand that this event has to cater to the needs of 800 million Europeans above all?” said Blatter.

“We must accept that football has moved away from being a European and South American sport,” continued the Swiss soccer president. “It has become the world sport that billions of fans are excitedly following every week, everywhere in the world.”

Point taken. Though I wonder exactly how many of those billions of excited fans call the Arab monarchy, with a population of 1.9 million, home. It’s not like the country has been a hotbed for producing soccer talent either.

So what new arising factors caused Blatter to now doubt FIFA’s decision to choose the tiny, oil-rich nation over the likes of South Korea, Japan, Australia, and the United States, who also cast 2022 bids?

Well – breaking news – Qatar is really hot in the summer! Monthly averages in Doha for June and July, when the World Cup is traditionally played, peak above 106 degrees Fahrenheit. Not quite the most comfortable conditions for players – or fans.

While Qatar has said they could overcome this issue by implementing internal cooling systems within their stadiums, FIFA officials are seriously considering rescheduling the World Cup to the winter months. This would create an awkward midseason interruption for the major domestic leagues, which generally run from late August to mid-May.

But issues off the field may belittle the conditions on the pitch: homosexuality is illegal in the Arab state. Compared with the laws in Qatar, the restrictive anti-gay “propaganda” laws in Russia, which have recently sparked heated international protests as the 2014 Sochi Winter Olympics near, seem quite mild.

Another issue – of particular importance to sports fans – is the prohibition of alcohol in public, as well as the appearance of drunkenness. Anyone vaguely familiar with the culture of international soccer fandom knows this is a problem. Additionally, there is only one liquor store in the whole country and individuals need a license to purchase goods.

Not only are these types of restrictions on personal liberties a problem for fans, but it also may translate into a problem for FIFA in the form of suppressed fan turnout. Attendance for the 2011 AFC Asian Cup held in Qatar was described as “paltry” and was the second lowest attended Asian Cup in 20 years.

More disturbing is the startling working conditions and lack of labor rights for the thousands of migrant workers brought in to construct and prepare Qatar’s infrastructure for 2022. Estimates say hundreds of workers have died building the infrastructure for the tournament in a country where migrant workers, who make up more than 90 percent of the workforce, have essentially no labor rights or negotiating power.

The International Trade Union Confederation, the world’s largest trade union federation, has formally called for FIFA to strip Qatar of the hosting gig if its working conditions aren’t reformed. ITUC General Secretary Sharan Burrow earlier this year said more workers will die preparing for the tournament than the amount of players to take the field. And with 500,000 more immigrants projected to arrive in the country to work, those tragic numbers can only rise in such destitute conditions.

With all these issues taken into account, it shouldn’t be too surprising that Qatar’s 2022 prize was blemished with allegations of corruption and bribery. Multiple individuals and media outlets have reported of FIFA officials being bribed and pressured for their support of the tiny, oil-rich nation’s bid.

Corruption claims aside, FIFA’s choice of Qatar to host the World Cup cannot really be perceived in anyway to have been made based on what was best for the players or fans. While 2022 is still a long way down the road, even Blatter has come to recognize FIFA’s mistake. I give him credit for at least owning his errs; rarely do such admissions come from organization heads.

If anything, perhaps we can at least learn from FIFA’s mistake and, unlike the World Cup, not go to Qatar in 2022. I’d suggest supporting our nations’ teams in our home countries with great passion, pride and available alcohol (in a responsible manner, of course). Let that unabridged enthusiasm serve as an example for why future World Cups should be held in countries that respect individual rights… and maybe also have milder summers.