The Man Behind the Mop 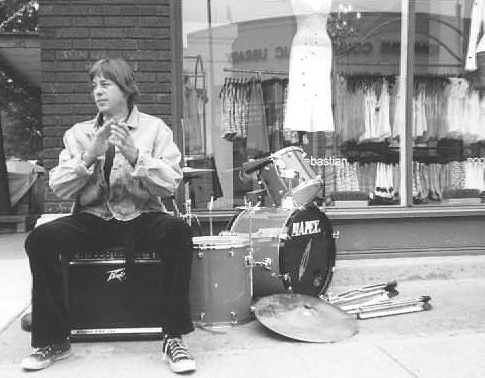 Terrence Flanigan is an anthropology major, a drummer and a black belt in karate. He attends a weekly book club and enjoys C-SPAN, though he doesn’t get the chance to watch it as much as he would like. Most students at Ithaca College will never know Flanigan by name, but his presence can be seen in the freshly swept staircases or the spotless mirrors in the communal bathrooms of Hood Hall. They will merely see him as a man in his late thirties, his long brown hair concealing half of his face as he pushes the vacuum cleaner across the tiled entrance, where countless current and prospective students pass through each day.

Flanigan is a facilities attendant at IC. Hood Hall is one of 26 residence buildings on campus, all of which are maintained by facilities attendants like Flanigan. He has cleaned many of the residential buildings on campus for the last eleven years and has encountered a variety of student-made messes. He said the worst times of year for excessive messes are holidays, midterms, Cortaca and finals week.

He has faced everything from smashed-in paper towel holders and toilets clogged with beer cans — though never in Hood Hall, the substance-free residence on campus — to vomit spewed down the carpeted hallways. Though scrubbing vomit out of the rug or mopping up bathroom floors are regular experiences for many facilities attendants, Flanigan said the worst clean up jobs are when students release the pin on a fire extinguisher just to fill the halls with an unnecessary coating of the white substance conventionally used for controlling small flames.

For every fire extinguisher unnecessarily set off, and for other similar incidents, Flanigan files an incident report and the building is charged. All the incident charges that cannot be traced back to individual students — which is most of them — pull money from a fund established solely for the purpose of paying for damages inflicted on residential buildings.

If students are caught damaging the dorms, fines and a judicial referral may not be the only penalty. Some incidents, like releasing a fire extinguisher when there is no fire, can lead to criminal charges. The reason for these regular incidents is a mystery not only to Flanigan and his fellow facilities attendants, but also to many students.

Last year, sophomore Greg Johnson lived on the ground floor of Boothroyd, and encountered what Flanigan considers a typical holiday mess over Halloween weekend. Earlier that Friday afternoon, Johnson observed a pumpkin sitting in the hallway of the first floor.

“Saturday morning, after obvious festivities, the pumpkin was mutilated, for lack of a better word, and its innards were literally all over the hallway and remained there until early Sunday,” Johnson said, “at which point Jerry, the Boothroyd custodian, was forced to clean it up, even though it was clearly not his responsibility. It should have been the students who murdered it.”

“A similar situation erupted a week ago with packing peanuts,” he said. “Yet again, Jerry cleaned it up and not whoever did it. There were packing peanuts everywhere. We repeatedly get emails about situations like this from RAs.”

The cleanup crew at Ithaca is the largest department on campus, but often receives the least attention. Many students don’t even know the names of the people who clean their buildings before they wake up each morning, or while they are in classes. Johnson said he believes most students don’t respect the facilities attendants, whom they expect to clean up after their messes.

“A lot of them are taking advantage of the fact that there is a custodian there to clean up the building,” Johnson said. “Their purpose is to keep the building sanitary, not to clean up after [students’] drunken escapades.”

Despite the frequent unnecessary messes, Flanigan is grateful for his job cleaning up after students because he has job security. He also said that Hood Hall is the cleanest residential building he has experienced on campus.

“They give us all we need,” he said, from a comprehensive training session and environmentally friendly cleaning products to special no-slip shoes that resemble Converse.

In addition to these activities, Flanigan takes two to three classes each semester, balancing his full-time job and his pursuit of an anthropology degree. He has accumulated about 75 credits, but said he is in no rush to complete the degree.

Flanigan experiences a high level of satisfaction when he finishes cleaning his building, and said, “I keep this place as clean as I possibly can to get respect.”

Occasionally, students will acknowledge the hard work and share their appreciation with Flanigan. “We’re not looking for it,” he said, “but it sure is nice.”

Jessica Corbett is a sophomore journalism and politics major who keeps her escapades clean. Email her at jcorbet2[at]ithaca[dot]edu