Raw from the Saw: Jeff Mangum 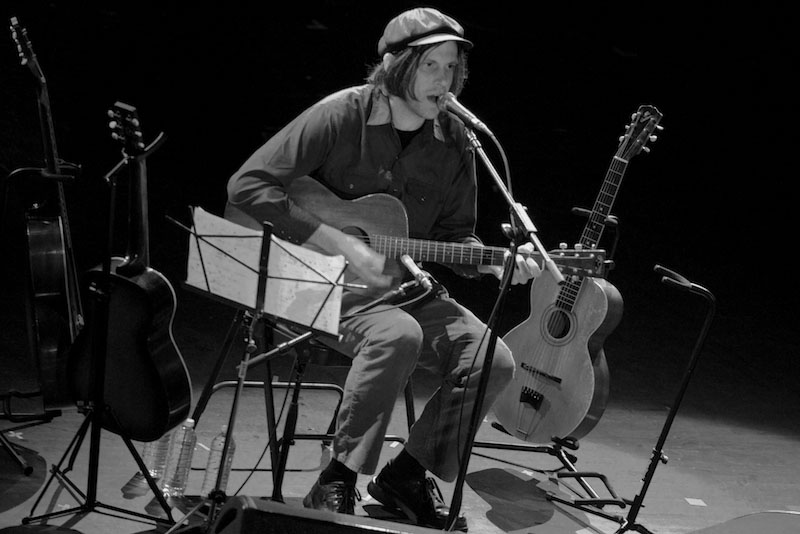 Live at the State Theatre

It was Feb. 13th, and excited concertgoers were gathering inside the State Theatre to see their one true love: Jeff Mangum.  Mangum  initially achieved fame the frontman of  indie rock band Neutral Milk Hotel, which broke up in 1999. What was so incredibly special about this performance was that this year marked the first time Jeff’s been on tour, playing Neutral Milk Hotel songs since 2001. This created a bittersweet air throughout the crowd, as the audience knew very well they would never have a chance like this again. The beauty and power in Jeff’s songs was only further complimented by the elegant layout of the venue. State Theatre is a classic concert hall with high ceilings containing mesmerizing patterns, auditorium seating, and a huge stage. When reflecting on my incredible experience seeing the show, the image of Jeff belting the lines, “Oh when this life just gets so grating/All the grittiness of life/But don’t take those pills your boyfriend gave you/You’re too wonderful to die,” from the tune, “Song Against Sex,” stands out crystal-clear in my mind. He sat there at his chair, looking very much like a young Fidel Castro, clad in an olive green patrol cap and a long grey beard, loudly singing this song to his adoring fans.

This aforementioned song is from Neutral Milk Hotel’s 1996 studio album debut, On Avery Island. Although this album and In an Aeroplane Over the Sea are the only two studio albums Neutral Milk Hotel ever released, they remain to this day, a highly influential band in the indie world. Personally, In an Aeroplane Over the Sea was the album that opened up so many doors for me musically and got me into many other artists of the singer-songwriter genre. Mangum performed a set containing mostly songs from this album, and other Neutral Milk Hotel songs. He also performed a particularly haunting cover of Roky Erickson’s song, “I Love the Living You.” Throughout the set, Mangum maintained this sort of cosmic connection with the crowd. People swayed in unison to his songs, and sang along to pretty much every song he played. It was evident that the majority of the people in the crowd have been greatly impacted by Jeff’s music throughout their lives, making the chance to actually see him perform these songs live an emotional experience.

A moment in the concert that especially highlighted the overall feel of the show occurred when Jeff went back on stage for an encore. Accompanied by his former band mate, Julian Koster on the singing saw, the duo finished the show off with an incredible rendition of the song “In an Aeroplane Over The Sea.” And the crowd went wild. The entire auditorium echoed with the collective voices of the crowd belting along with these reunited band members. Although it was a stripped-down cover of the song, having only guitar and singing saw to accompany the vocals, the power and energy of these two men rang throughout the theatre.

Another highlight of the evening was the second opening act, The Music Tapes, former Neutral Milk Hotel member Julian Koster’s experimental pop-performance art band. They delighted and intrigued the audience as they played a multitude of bizarre instruments, including the singing saw, a banjo played with a violin bow, chimes, and various other musical gizmos. Koster told us a story about his former music mentor who had the power of noticing rhythms in anything he came in contact with, from people to household objects. He said that his mentor was able to change melancholy rhythms to upbeat ones in order to subconsciously make people feel content and happy. This anecdote went hand in hand with the wide range of unconventional instruments he and his band played because he was proving that rhythm comes from anywhere and everywhere.