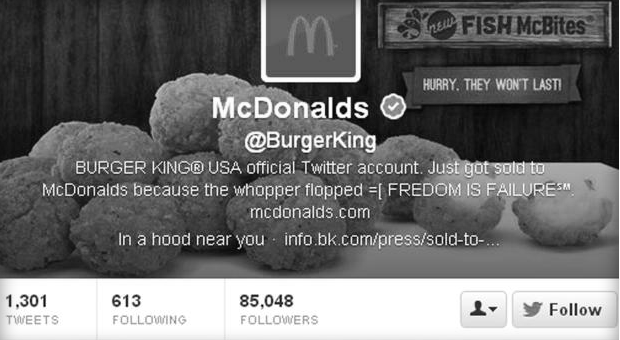 When a red carpet interviewer approached The Black Keys drummer Patrick Carney at the Grammys this year,Carney was asked whether he believed tween heartthrob pop sensation Justin Bieber deserved an award that evening. Carney replied, “He’s rich, right? The Grammys are…for music and not for money. And he’s making a lot of money. He should be happy, I guess.” The Biebz retorted via twitter, and so the gauntlet was thrown.

Twitter war was declared. Carney retaliated with full force by changing his Twitter profile picture, name and bio to resemble Bieber, and for a straight week, he relentlessly mocked Bieber and his fans. Carney clearly came out on top in this one-sided celebrity feud, considering the Beliebers’ illiteracy and lack of creativity.

For whatever reason, Twitter wars seem to be a consistent trend between celebrities these days. Not only do Twitter battles occur between celebrities, but even fast food franchises are victim. Hackers took over Burger King’s Twitter February 18, making it look like a McDonald’s account.

For whatever reason, mean things are so much easier to say when seated behind the trustworthy screen of a laptop. Within minutes of posting, Twitter wars can start, escalate, devastate friendships and even ruin careers.

In November of 2012 singer Chris Brown went so far as to delete his Twitter account after a lengthy and vulgar fight with comedian Jenny Johnson. Somehow, Twitter has a way of bringing out the worst in people and only getting them further into trouble. And although most of Chris Brown’s tweets are too vulgar to reproduce here, such public catfights often provide entertainment for the rest of us. Twitter battles will always be amusing to follow, and these cyber wars will be archived forever. So watch your Twitter mouth.

Robyn Schmitz is a sophomore journalism major who wouldn’t diss you on the internet cause her momma taught her better than that. Email her at rschmit1@ithaca.edu