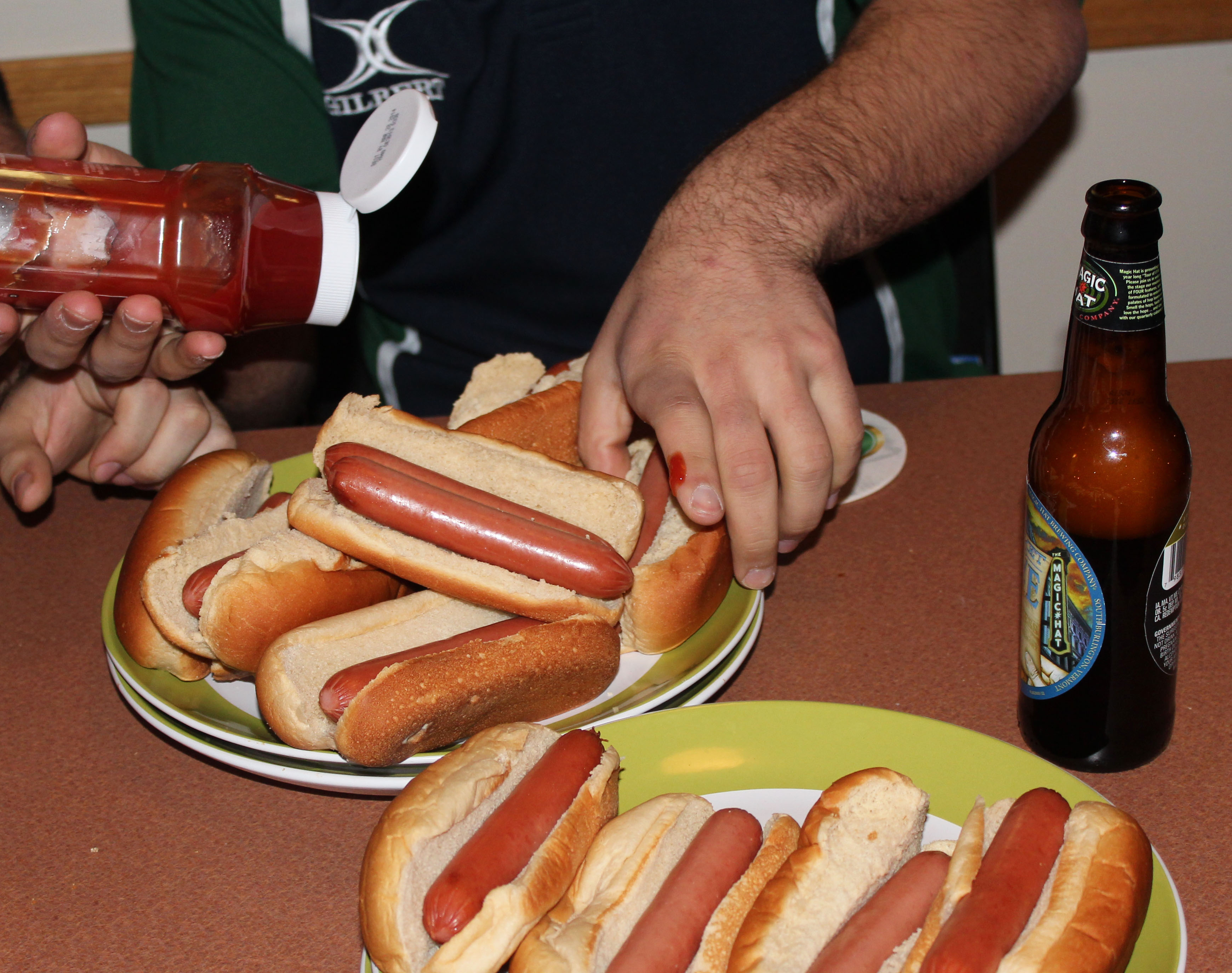 The American art of competitive eating

When most people think of competitive eating, thoughts of “all-American” pie and hotdog eating contests come to mind, with rows of sweaty competitors  stuffing their faces with as much food as they can fit in their mouths. While such contests are not uniquely American, they did begin gaining popularity in the United States after Nathan’s Famous held its first hotdog eating competition on Coney Island 96 in 1916.

Since then, the types of foods eaten and the venues of contests began to vary and spread quickly, both nationally and around the world. Now the home to Major League Eating and the International Federation of Competitive Eating, America has developed a reputation for such competitions. Ranging from baked bean to latke eating contests, today, people all over the world are eager to test their stomachs at the intense game of competitive eating.

Competitive eating veteran Don “Moses” Lerman from Levittown, New York, has competed in over 100 food competitions since he began in 2000. Now retired at 64 years old, he has decided to resign from his life of competitive eating to enjoy retirement and time with his family. However, he remains passionate about his past career in the art of eating.

“All those years were nothing but fun,” Lerman said. “It was a really great time.”

One point that Lerman emphasized was how much skill and willpower is required in the sport of competitive eating.

“Three things that are very important in a contest are speed, capacity and technique,” Lerman said.  “My family was also very dedicated and supportive, which really helped.”

Lerman recounted his eating career passionately, explaining that he gained many memorable experiences and friendships through participating in contests. He nostalgically recalled his many feats:

“There’s nothing like the cheer of a crowd. It was a truly great feeling.” His biggest regret, however, was that he wished he had started “in his 20s or 30s, when [he] was younger.”

Otherwise, Lerman has no regrets about his participation, and takes great pride in his many prior wins, and the fact that he was actually the first competitive eater to coin a nickname. Don “Moses” Lerman became his title when his aunt decided that his doppleganger was a 1981 Islander’s hockey player. From there, the name stuck.

Just getting started in the game, however, is Ithaca College’s very own Taylor Palmer, a junior economics major. Although still an amateur, Taylor has so far competed in and won one second place and two first place titles in the past three chili-pepper eating contests at the Downtown Ithaca Chili Cook-Off.

“I had a natural propensity for eating hot foods, so first year around I decided for shits and giggles I would throw my hat in the ring. I found I was pretty good at it, so I kept going with it,” said Palmer.

His family and friends were also very encouraging of his newfound hobby “My family’s very much on board with it. My friends are also generally there to cheer me on. Pretty much everyone has been very supportive,” Palmer said.

Although disappointed by his second place title at this year’s chili pepper eating competition, Palmer said that his loss gave him even more motivation.

The competitive eating training process is demanding. Back in his days of rigorous training, Lerman risked water intoxication on a regular basis by drinking two gallons of water per day.

“It expands the stomach,” he explained. “Some people starve themselves. That shrinks the stomach. You want to stretch it.”

Palmer agrees that it’s helpful to expand the stomach, which he says can be effectively done by eating a head of cabbage for all meals, followed by adrinking a gallon of milk. In addition to this, however, he also plans on doing some specific training for spicy food competitions in particular. He gave an example of one hot food champion who goes to sleep at night with chili paste lining the interior of his mouth.

“That’s something I’m going to give a shot very soon. If I can fall asleep with a habañero in my mouth I will be prepared,” Palmer said.

Though training for and participating in eating competitions has not yet posed any known health consequences for either Lerman or Palmer, it is not without serious risks.

As competitive eating has become increasingly popular, dieticians have speculated about its possible dangers. Binge eating can cause stomach perforations in people with undiagnosed ulcers, and since consuming such massive amounts of food in such little time is an extreme and unnatural activity for the body, doing so could exacerbate underlying health conditions. Other unexpected complications can include jaw fracturing and jaw arthritis— two conditions that can make eating anything a painful and difficult experience.

Despite the excitement surrounding competitive eating, the challenges and possible health hazards that it poses generally outweigh the rewards for all but the strongest of stomachs. However, for veterans like Lerman and new entrants like Palmer, those risks just add to the glory of  winning— and that glory can be addicting, as Palmer is discovering.

“Keep a lookout for me in the Southern Tier amateur competitive eating circuit,” Palmer said. “And if you’re thinking of signing up for the chilli pepper eating contest, don’t—because I’m going to win.”

Lizzy Rosenberg is a freshman IMC major who is ready for any eating competition, as long as it involves Indian food or avocados. Email her at Erosenb3[at]ithaca.edu