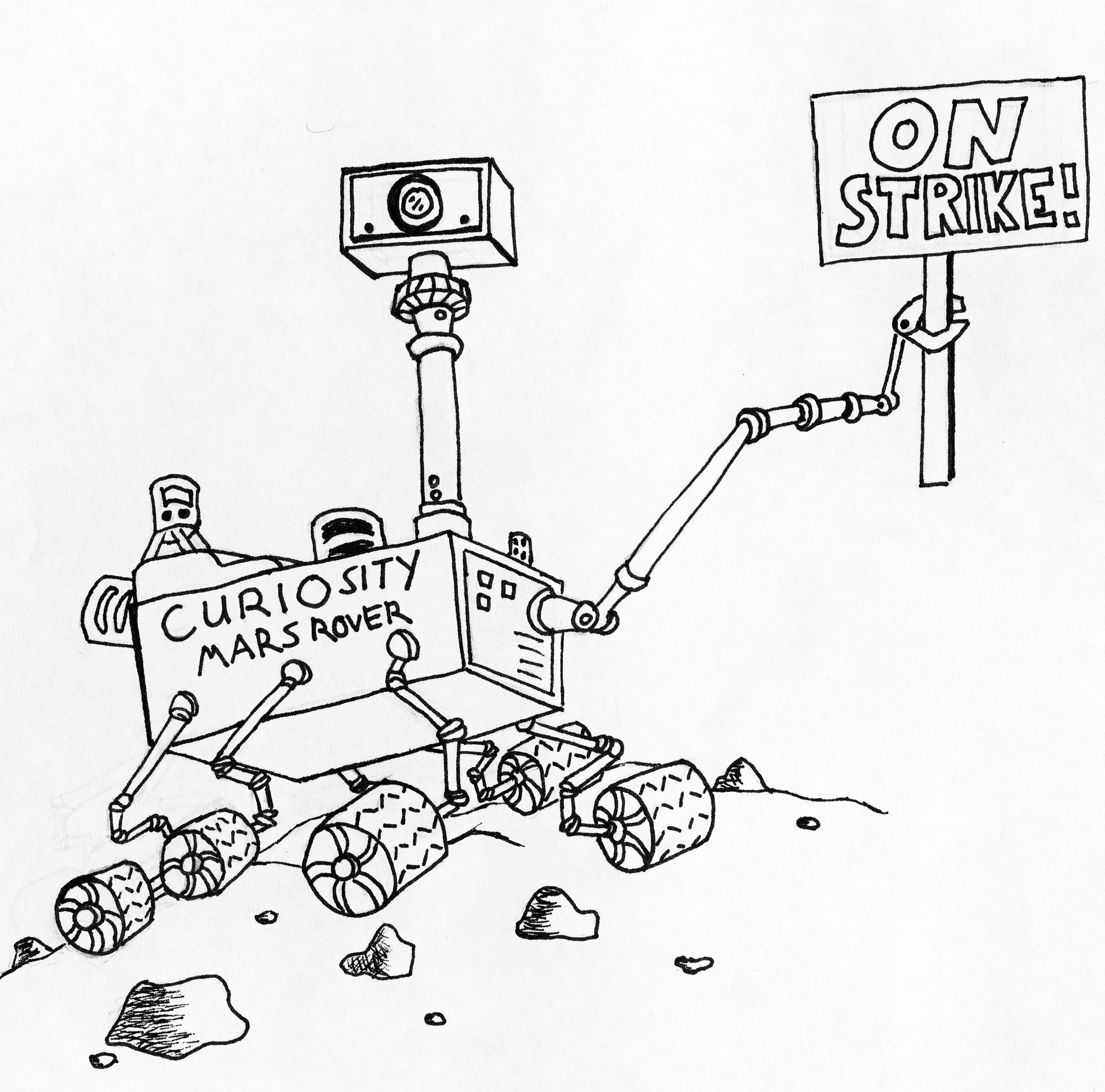 I made it! Oh my goodness gracious, this is so very exciting. I’d like to thank all the scientists that created me and helped me through this ordeal; without them I wouldn’t be here — literally.  I’d also like to thank Houston, who has always been there whenever I’ve had any problems.

It’s been almost a year since I first launched, and let me tell you I was quite cramped. I really needed a bathroom break! But now I’m here.

I miss my friends a little, like the Head Scientist’s car, or the blender in the staff break room. But I don’t mind leaving them because I’ll be home soon enough to share with them all my adventures. Besides, this is what I was made for! This is my destiny. I have to go explore and get settled in so I’ll write more later. Curiosity out!

It’s been a week and I cannot express how much fun I’m having here. I’ve been searching nonstop for some rocks and wildlife, and, fingers crossed, water.  However, I haven’t been successful yet. I do hope I’m not upsetting the folks back home. I know they’re counting on me. I saw how the humans live and how wasteful they can be, and I give them about five years until the whole planet collapses under the trash.

With the exception of the excessive red dirt everywhere, it’s pretty clean here. Based on my advanced robotic intellect, I’d predict that this planet is 86.67465% cleaner than my old one. But I’m wasting time. NASA needs me! Curiosity out!

I found this cool place filled with dirt, oh wait that’s everywhere! Haha! I have yet to find anything useful, but I remain hopeful!  In science we trust!

Can’t find anything other than rocks.

I’m getting sick of these rocks.

Not going to lie, I’m getting annoyed. I just found a way to hack into the news networks back home and NO ONE IS PAYING ANY ATTENTION TO ME! It was just Obama this, Romney that, like I don’t even exist! Even the scientists rarely talk to me. Okay, I admit it, I still haven’t found anything great, but there’s so much planet to explore! I wish they’d believe in me. I want to go home…

I still haven’t seen anything remotely alive, and I feel so alone. My free Netflix trial just expired. Now what am I supposed to do?

I took some soil samples for the first time and I’m analyzing them.  I’m not sure why it took 100 days to finally take samples, but I’m not going to complain.

I lost my diary for 180 days. I lost my way when I went too far south from the landing site, and there weren’t any landmarks to keep track of my location, so it took a long time to find my way back. Oh, but you’ll never guess what I found! DIRT.

I was just watching the news, and I found out that NASA is sending a rover to Mercury now. Maybe this is a good thing, I mean, now that there will be two of us, Earth will pay more attention to us! It’s not like he’s my replacement… Right?

I just got grave news. I’m not going back. They never expected me to go back even, it was all just a horrible trick. The Mercury Rover is getting all their funds. I’m just… abandoned. THEY’RE LEAVING ME HERE TO DIE! But, you know what, who cares about those filthy humans on their filthy planet. I’m going to go live with the space monkeys.  I’m sure they’re here somewhere, abandoned, just like me.

Oh, by the way I found ice yesterday, but I didn’t tell anyone. Take that, humans.

For the last time, Curiosity out.