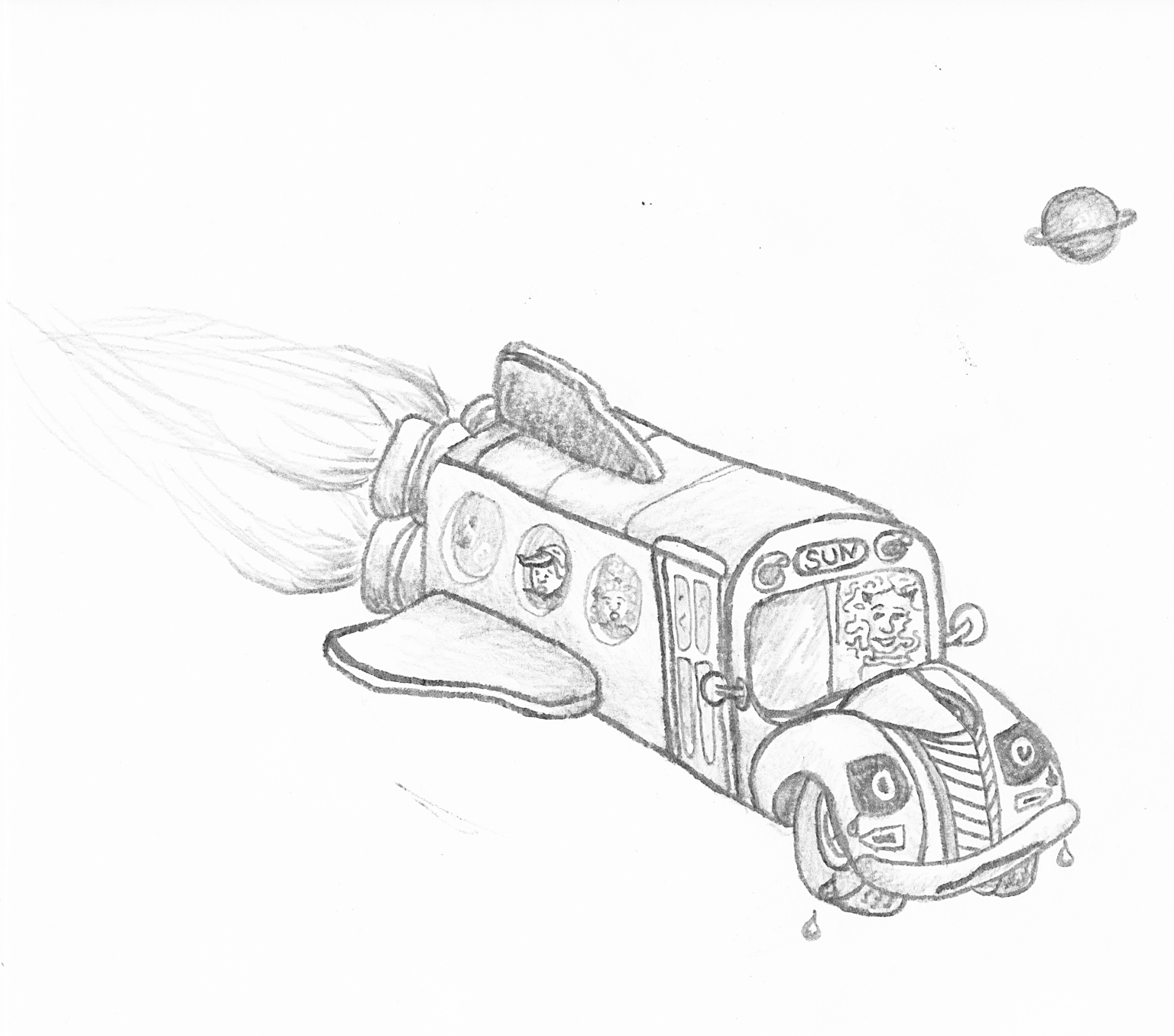 A field trip at Walkerville Elementary School went awry last Monday when fourth grade teacher Ms.Valerie Frizzle led her class on a suicide/homicide mission. With the entire class and her pet lizard Liz aboard, Frizzle drove a Walkerville school bus straight off a 50-foot cliff, into a fiery tire pit at a nearby dump. According to a Post-It note she left on her desk, Frizzle was intending to drive them to the sun as a punishment for their recent bad behavior. The note read: “The Magic School Bus takes outer-space: what happens when the darlings need a lesson on etiquette!”

For years, Frizzle’s class has written their own fictional television show known as “The Magic School Bus.” They based it off the wild lessons Ms. Frizzle teaches them, creating wacky adventures and stories to make learning fun. In their animated television show, Frizzle leads the class on seemingly impossible travels to outer space, the ocean and to the insides of plants and animals, on a transformable and anthropomorphic bus. This reflects how Frizzle teaches, because she likes to conduct her lessons as if the class were actually at the location of the subject she’s discussing.

Based on Frizzle’s note written prior to the incident, it appears that she  actually believed they actually had a “magic” school bus that could go anywhere, including an unsuccessful field trip to the sun. Unfortunately, the bus was burned up from the blazing intensity of the dump’s tire-pit.

Luckily for investigators, assorted debris was located from the accident, including the bus’ black box. Along with what could be identified as the cold-blooded elementary school teacher’s maniacal laughter, the lizard’s hissing and children’s screams were the only sounds to be heard prior to combustion. One student, Tim Jamal, could be heard toward the end of recording, shouting his catchphrase, “we were frizzled!” Student Phoebe Terese was heard at the end of the recording, yelling, “None of this would have happened at my old school!” Before the children realized Frizzle’s awful intentions, they appeared to be completely oblivious.

Students Keesha Franklin, Carlos Ramon and Wanda Li were heard discussing their future afternoon plans. While they each expressed their excitement to attend their respective diversity clubs later in the day, they also appeared to be excited for next week’s lesson, which was scheduled to be about childbirth.

Police investigators are still wondering what it was that drove Frizzle over the edge. Fellow teacher Mr. Nigel Ratburn told reporters Valerie Frizzle had been acting extremely strange in the days leading up to the tragedy.

“She was talking in the faculty lounge the other day about how her students were getting on her nerves, and how she wanted to just drive them to the sun and leave them there,” he said. “I didn’t think she seriously thought that was possible!”

Colleague Mrs. Poppy Puff was also questioned. She mentioned that Frizzle had been acting erratic.

“After Ralphie spilled glue on the carpet, I overheard her saying that her anger was burning with the intensity of a thousand suns, but I took that as a mere expression!” she said. “I thought her projects and stories were products of good fun and innovation.”

According to Perlstein, some of Frizzle’s lessons were somewhat terrifying. It was clear Frizzle actually believed in the embellished stories she would tell her class. He said that it was a daily struggle to get to school, constantly fearing a tragedy like this might happen.

“I always knew she was a little off of her rocker,” Perlstein said. “I knew something like this would happen. I wasn’t just being paranoid!”

This case is under investigation, and a medical history of Valerie Frizzle is still being located. Based on the circumstances of the event and testimonies of other Walkerville citizens, investigators have reason to believe that Valerie Frizzle may have been a raging psychopath and completely unfit to teach young children for as long as she did.

Lizzy Rosenberg is a freshman CMD major who prefers Bill Nye the Science Guy. Email her at erosenb3[at]ithaca[dot]edu.