A Star By Any Other Name 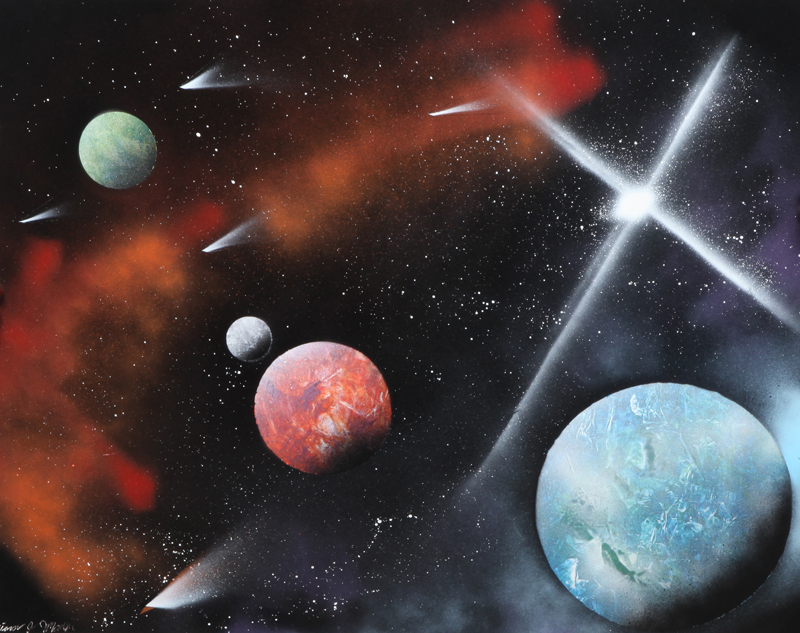 When Robin Meyers, a friend of the Framarini family, died from cancer in the spring of 2007, the family purchased a star in her name. Sophomore Marissa Framarini’s father, Louis, said that in the past, his family has given flowers, edible arrangements and donations when friends have died, but for the Meyers, they were looking to do something different. His wife discovered a website that sold star names and they paid about $50 for a certificate they received in the mail, which they gave to Robin’s husband, James. The Framarinis named Robin’s star through the International Star Registry, one of many companies that charges customers to name stars. While the informational pages on these company websites explain that the scientific community will not recognize names bought through these companies, some customers, like Framarini, do not realize that astronomers won’t ever use purchased star names.

Even though at the time he did not realize astronomers would never use the name, Framarini said he would have gone through the process either way because it made James happy.
“He called me up and was real thankful,” Framarini said.

Mr. Meyers has since died, but he spent some time in his last few years gazing up at the stars.

“He was just happy when he looked up at the sky and he thought there was a star named after his wife,” Framarini said.

Naming a star after someone is often seen as a thoughtful gesture, but the practice has garnered criticism from many astronomers and the International Astronomical Union, the organization responsible for naming stars and other celestial bodies.

The IAU disassociates itself with companies that sell star names and describes it as a money-making ploy in a Q&A section on its website:
Q: But if I want to, can I buy the name of a star anyway?
A: Sure, there are people who will be more than happy to take your money….
Q: Can you tell me who and where?
A: Sorry, we are a scientific organization, not a branch of the entertainment industry.  We cannot distribute addresses of enterprises selling fictitious goods.
Q: OK, I found a dealer myself; what will I get from them?
A: An expensive piece of paper and a temporary feeling of happiness, like if you take a cup of tea instead of the Doctor’s recommended medicine.  But at least you do not risk getting sick by paying for a star name, only losing money.

Besides disapproval, the IAU also offers an explanation of the actual star naming process. Rather than being sold, star names are assigned based on internationally accepted rules. Other than a few ancient stars that have traditional names, most of which are Arabic, for scientific purposes stars are assigned catalog numbers.

Terry Herter, Chairman of the Department of Astronomy at Cornell University, said that because there are so many catalogs, in many cases there are various catalog numbers assigned to individual stars. Herter said astronomers select catalogs based on what subject they are studying or what information they need. Astronomy students and professors at Cornell frequently use the Hipparcos Catalog, which has been around for almost two decades.

Johann Bayer introduced the earliest naming system in 1603, which was a star catalog that categorized stars by constellations and assigned Greek letters to individual stars. Other popular catalogs include the New General Catalogue, the Bright Star Catalogue and the Smithsonian Astrophysical Observatory. Even the star naming company Name a Star uses the Smithsonian Astrophysical Observatory catalog when selling and assigning names to stars.

On June 30, 1988, the International Planetarium Society released a statement about naming stars.

The statement said: “The star names recognized and used by scientists are those that have been published by astronomers at credible scientific institutions. The International Astronomical Union, the worldwide federation of astronomical societies, accepts and uses only those names. Such names are never sold.”

Like the IAU, the IPS warns potential star buyers: “Be aware that no one can buy immortality for anyone in the form of a star name.”

Because stars cannot be bought, sold or owned by anyone, the companies do not have any rights over what the star is named. Only the company that sells the star will recognize the star name. Usually the company will publish a booklet or online registry that lists every purchased star name, which can be bought for an additional fee.

While some question if the practice of selling stars should even be legal, Rocky Mosele, vice president of marketing and advertising at ISR, told Wired magazine in 2001: “We’ve been given a clean bill of health by the attorney general of Illinois … They find no problem with what we do; we’re not trying to mislead people.”

However, the ISR has threatened legal action against critics in the past. As the Wired article noted, ISR threatened to sue a student at Ohio Wesleyan University in 2000 because the student was hosting a Web page criticizing the practice. The threat of a lawsuit caused the university to take down the page.

On the ISR homepage, the company claims that their list of satisfied customers range from celebrities to dignitaries to individuals worldwide. However, there is no mention that the process isn’t officially recognized by the astronomers, which is one of the major critiques made by members of the scientific community.

“Why, after the astronomy community has been so nasty to us, should I do them any favors?” Mosele said to Wired. “They’re requesting something of me. Why should I do it based on their request after they’ve been so nasty? I don’t think our customers are confused.”

A box popped up on his computer screen, claiming the order had gone through and his certificate of registry would be emailed in the next ten minutes. Ten minutes passed. There was no email and no charge on his credit card. He repeated the process.

After two failed attempts, Owens called Star Namer to inquire about his order. The man on the phone said he had no way to verify if the order had gone through and suggested that Owens fill out the “Contact Us” form on the website. Instead, Owens waited a few hours and tried the process one last time.

This time it worked. Rather than a pop up window, he was directed to a confirmation page. Moments later his credit card was charged and he received his PDF certificate via email.

There is a column of six photos of outer space along the left side of his certificate, which includes the star name, dedication date and coordinates of his star in calligraphy font. However, when Owens typed his supposed star coordinates into three or four star maps online, he was unable to locate his star, which he named “The Star of David.”

“It was a very low price to have your name immortalized as a star,” Owens said. “I am very excited about this, despite the fact that it’s not real.”

While Owens purchased his star name knowing that the scientific community would never use his name, many customers, like the Framarini family, are unaware the process isn’t as official as the clever online marketing has led them to believe.

Owens said he found Star Namer to be misleading, since “there was no overt indication that it was not legitimate.” His motivation for the purchase was simply curiosity. “I don’t see any sense in it. I’m paying for someone to make a certificate that I could make myself,” he said.

Star Namer is a more recent version of star naming companies that have been around since the late seventies. The ISR, which the Framarinis used, started selling star names in 1979. Star Kits start at $54, which includes a certificate with the desired star name, dedication date and telescopic coordinates, and a sky chart with the location of the star circled in red. Deluxe and Ultimate kits include frames for the documents and cost over $100.

Name a Star, which has been operating since 1978, markets itself as “The original star naming service.” Name a Star offers both emailed PDF and Printed Certificate Packages, starting at around $30. In addition to the star packages, which can cost up to around $100, Name a Star publishes and periodically updates a list of all the stars ever named through the company. Customers can purchase and download the Name a Star PDF Record Book for $14.95.

In response to criticism from the scientific community, Vaughan said, “We’re upfront about the nature of our business … This is an honest company providing a fun product.”

The About Us and FAQ sections on the company website explain that while Name a Star uses real stars listed in the Smithsonian catalog and only names each star once, there is nothing scientific about the process.

“We’re not a scientific body and we don’t claim to be one,” Vaughan said.

For customers who don’t read the fine print and are upset to discover that the scientific community does not recognize purchased star names, Name a Star offers a money back guarantee, though Vaughan said refund requests are rare.

In the days before Internet the company advertised in magazines and accepted mail-in  orders. Now, many orders are placed via telephone or online.

Vaughan said the company grew significantly during the first few years of Internet commerce, but business has leveled off a bit with the influx of copycat sites because the idea of star naming cannot be patented or trademarked. A simple Google search reveals dozens of sites from all over the world that offer star naming packages. While the Internet has increased competition among the companies, the popularity of the practice doesn’t seem to be fading. However, neither does the controversy.

For Framarini, the price of naming a star in memory of Robin Meyers was worth his friend’s happiness. While Name a Star and other star naming companies maintain that they are upfront with their customers, the commercial practice of star naming continues to receive criticism from the scientific community and others, like Owens, who are familiar it.

“The question is whether it’s better for people to feel good about themselves or actually know the truth,” Owens said. “So it can feel really good to go buy a star for a lost loved one or something and think that they have this place in the universe forever, but in reality it’s probably better to realize the only thing you’re doing is lining the pockets of this website.”

Jessica Corbett is a sophomore journalism major who would name her star “Fluffy”. Email her at jcorbet2[at]ithaca[dot]edu.