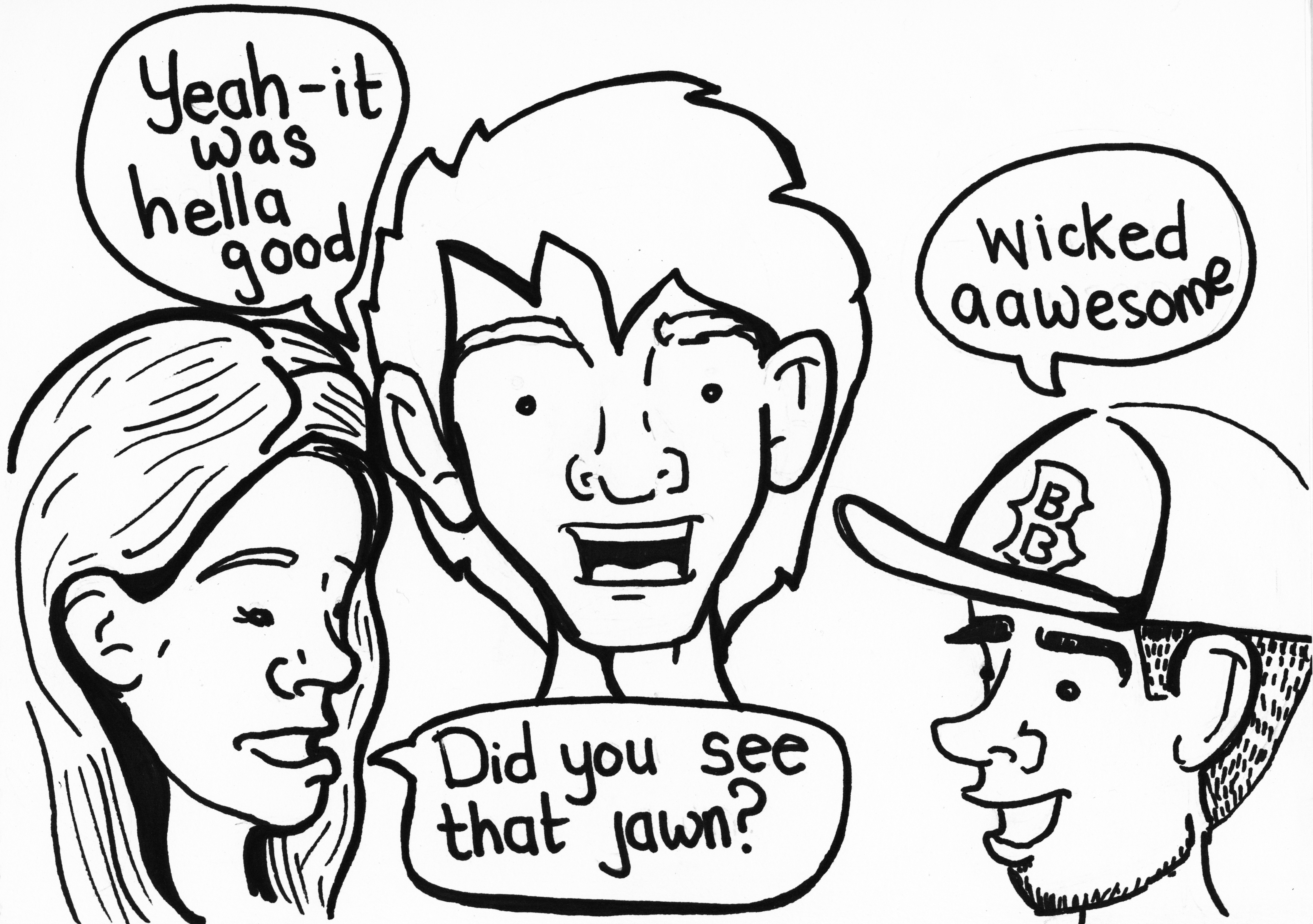 A cross-country look at societal slang

Upon entering college, I found myself profoundly confused by the dialects of everyone else around me. I was a naïve seventeen year-old from Long Island without much exposure to kids outside the tri-state area. Now as a junior at Ithaca College, I’ve found that my exposure to people from a wide array of regions, both close and far from my native island, has opened me to a whole new array of words and terminologies. These regional slang words have even carried over into my own personal lexicon, expanding my ability to communicate with people all around the country.

I spent my freshman year at Boston University. For the first time in my life, people weren’t getting “mad” drunk on the weekends. They were getting “wicked” drunk and “hella” drunk. I was perplexed by these foreign terminologies and genuinely curious as to why, “You must be from New York,” was the response I would get from various people whenever I said the word, “word.”

It got me thinking about the slang terms I use. I had friends at summer camp that lived in New York City. They would frequently use the word, “word” as a term of agreement, and I suppose it just rubbed off on me. But it really got me to wonder why little Jewish kids were using a variation of the term, “word up,” a phrase coined and popularized by the urban population of the 1970s. That’s the thing about slang words; they have a way of appealing to a wide array of people in an area. Soon enough, an expression rooted in a certain culture makes its way through the entire population and becomes a regional term.

While accents can signify where one was raised in the country, dialects reflect the culture of that region.  For example, the term “hella” comes from California’s Bay Area. “Hella” is a very interesting slang term because people of all races, ethnicities and socioeconomic levels use it. In this sense, “hella” is more than just a shortcut to saying “hell of a lot of,” it is a unifying term that links people of all different backgrounds to the same lexicon.

Being that my friends at Boston University intermixed people from the West Coast, the South and Boston, I was constantly exposed to all of their various terminologies. I associated “wicked” with Massachusetts, “hella” with California and “ya’ll” with the South. I was kind of under the impression that the vast distance between these different sections of the country influenced the variations in the way they talked. I associated regional closeness with similarity in slang, and assumed that people from New Jersey and Pennsylvania used the same slang words that I used. But that was before I really knew anyone from Pennsylvania.

One of my roommates here at Ithaca, junior Mark Melchior, grew up just outside of Philadelphia, in a town called Media. Being from the tri-state area, Mark uses many of the same slang words that I do. But while using words like “mad” and “dope,” he also frequently says various Philadelphian terms and expressions that I have never heard before. A word that really stands out from the others is “jawn” (/jah-n/). I found it very difficult grasping the true meaning of the word because as Mark put it, “It literally could mean anything.” Jawn could be used to replace any person, place or thing that you are referring to in a conversation. It’s especially useful for when you can’t identify something specifically. I remember a time when Mark, our other roommates and I were all hanging out in our backyard. Mark told us to look at a funky looking bug on the ground that wasn’t a beetle, fly, spider, mosquito or any other distinct species of insect. So naturally, Mark said, “Look at this jawn.”

Since we’re on the topic of Pennsylvania, let’s talk about its other most popular city. No … Not Scranton. I’m talking of course, about Pittsburgh. Similar to how people from Brooklyn may use the expression, “yous” instead of “you,” people from Pittsburgh use the term, “yinz,” in replace of “you.” For example, “Yinz guys going dahntahn to watch dem Stillers?” is an expression one might hear very frequently in Pittsburgh. When translated out of “Pittsburghese” (The language of Pittsburgh), this sentence would read, “You guys going downtown to watch the Steelers?”

Many people associate the use of slang with a lack of education or just general ignorance. I highly disagree with this. In many ways, slang breaks down the barriers of race and social status. When people from different areas expose one another to their variations of the English language, society melts into a less judgmental nation where our differences don’t limit our ability to communicate with one another as people.

Jared Corwin is a junior TV-R major and a wicked cool jawn. Email him at jcorwin1[at]ithaca.edu.