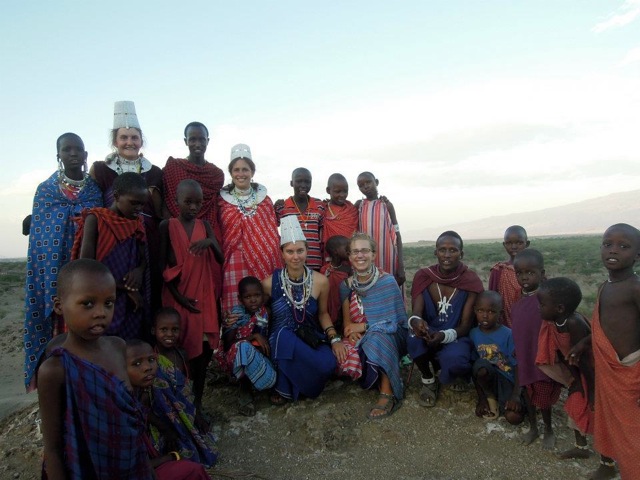 As the 28 of us stood waiting on the porch of the village guesthouse, my eyes scanned back and forth across the crowd of smiling faces gathered below us, soon to be our families for the next three weeks. The nervous smile glued to my face and quiet giggle reverberating from my throat revealed the concoction of apprehension and excitement that filled every inch of my body.

One-by-one, in seemingly no order, my classmates were called down to meet their homestay mothers, fathers, sisters, or brothers and big embraces were exchanged.

My heart beat so loudly that I swore I would miss hearing my name, at best, or internally combust, at worst.

A week earlier we had been given a photo of our family, a list of their names and the amount of livestock they owned, and a village map of Bangata, Tanzania. However, what we were waiting to find out would be by far the biggest factor in shaping our homestay experience: their English-speaking abilities.

It was my third week in Tanzania with the School of Internatonal Training’s “Wildlife Conservation and Political Ecology” program. Due to the nature of the program, we’d spent the majority of our time so far on safari, observing wildlife in national parks, isolated from people. Therefore, my Swahili vocabulary was embarrassingly still limited to phrases from The Lion King.

Since English is technically one of the official tongues of Tanzania, our program did not have the same requirements as many other study abroad programs, most of which expect students to have several semesters of college-level language classes under their belt before applying. In retrospect, the study abroad website should probably have included the disclaimer: “Language requirement: None. BUT student will be completely lost and confused and must be willing to repeatedly make a fool of him/herself.”

In the few Swahili lessons we’d had, we were taught basic greetings, numbers and time-telling, but our knowledge had hardly been put to the test. When it was, it hadn’t gone so well.

A week earlier while studying in the Muzumbai rainforest, a little-known paradise in eastern Africa, we ventured into a neighboring mountain village to hold focus groups with villagers on a variety of topics with the help of translators. As we were leaving, one of my friends bravely attempted to express her gratitude in Swahili.
“I thought I had said ‘It was nice to meet you’ but was confused when everyone started to laugh. When we walked out of the home, someone told me that I had said, “It’s nice to be fat!” Mia Pamisano, a fellow SIT student and junior at the University of Washington, said.

When my name was called, I eagerly ran down the porch stairs to meet my 15-year-old homestay brother, Levis. With only a few words exchanged, Levis took the bag off my shoulder and escorted me down a dirt path, through maize and banana fields, across a river and up a steep hill, arriving at home half an hour later.

That first day was one of the most awkward of my life. I was shown to my bedroom and given food via hand gestures, and struggled to even introduce myself to the people that were so generously providing accommodations for me. I was simply incapable of saying “I am full”, excusing myself to use the restroom or attempting small talk. 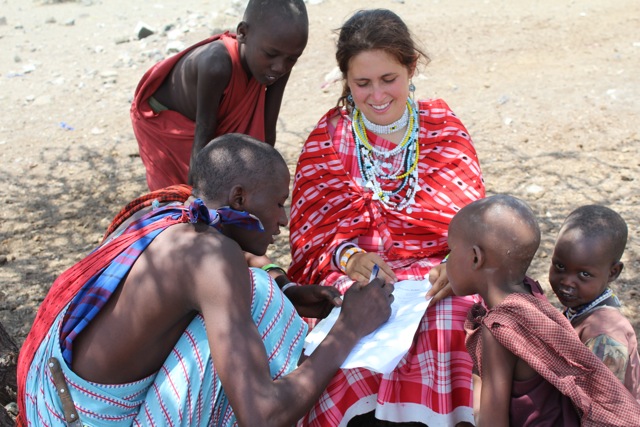 That afternoon Levis and I sat outside pointing at objects and labeling them in English then Swahili.

The oldest of my three siblings and a secondary school student, Levis had the best English of anyone in my family. Like many Tanzanians, his vocabulary was actually quite extensive but once more than a couple words were strung together, he was lost. Levis seemed entertained by the game so I pretended to retain the exhaustive amount of Swahili vocabulary he spat off for several hours.

The following days were full of miscommunication and misunderstanding. I yearned to engage in conversation, to ask questions and learn, and to explain myself, but the language barrier was all-pervasive. It prevented me from getting to know the people around me and made simple tasks unnecessarily complex. The helplessness was extremely frustrating.

On day two, I was woken abruptly in the middle of the night by my Mama banging and yelling outside my bedroom door. Since I had no idea what she was saying and didn’t know the Swahili for “hold on”,  I jumped out of bed and hurried to cover up my legs with a kanga, a skirt-like covering warn by Tanzanian women. She came into the room shining a flashlight around, still yelling, as I stood in confusion repeating “Sielewi! — “I don’t understand!”. Mama pulled me into another bedroom where the she shined the light on a bunch of ants crawling around the concrete floor and chucked salt at them. I was then dragged back into my room where the spotlight was shone once more before she left. Unsure what had just happened or what to do next, I crawled back into bed. The reason for all the excitement remains unknown.

For over a week I referred to my younger brother as Mbwa, the Swahili word for ‘dog’ instead of Mba, his name. I messed up plans to go hiking with my neighbor Mary and lacked the ability to give a sincere apology. During an open-casket funeral, I misinterpreted my Mama and accidentally got in the line of people walking up to view the body. Eventually, I decided I should befriend the one person in my family I felt I could really relate to, my 4-year-old sister— although her vocabulary undoubtedly surpassed mine. To my relief, I was not the only one struggling. 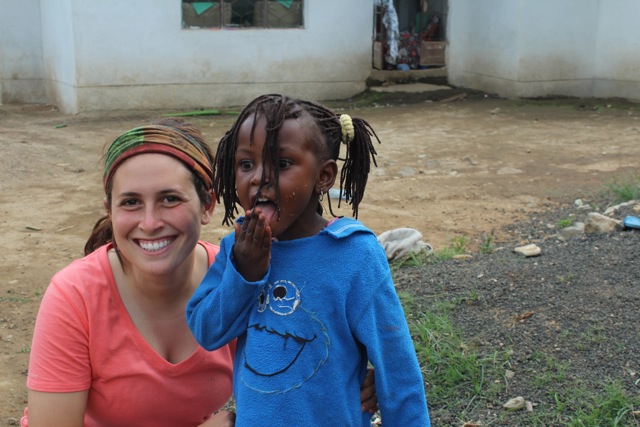 “Tara and I spent a week pointing to bugs saying “doodoo” in weird voices to make my little sister laugh and then realized that she was laughing because doodoo actually means a child’s penis while mdoodoo means insect,” Palmisano said.

It began to seem like the language existed for the sole purpose of providing common relief to our families.

While limited by communication, the prescribed silence forced us to take a step back, to spend more time observing and less time speaking. Since my words were few and far between, each syllable took on considerable meaning and as a result I found myself thinking a lot more before spewing out thoughts.

Luckily, we had four hours of Swahili class each morning and the learning curve was extremely steep. One of the first things we learned is that in Swahili, the greeting is the most important part of a conversation. It typically includes several questions— “How are you? How is your family? How is school?” What makes it easy is that the answer is always ‘nzuri’— ‘good’. Even if you’ve been in bed with malaria for weeks, the answer is ‘nzuri kidogo’— a little good. Despite my vexation with the language barrier and the isolation that ensued, I tried my best to mirror the “Tanzanian attitude” and remain positive.

Each day I looked forward to the excitement on my Mama’s face as I showed off my new vocabulary. I slowly figured out how all of the children running around the house were related, how to offer to carry my own water to the wash closet and how to politely refuse a third helping of rice at dinner. I was slowly able to identify the names of the food I helped Mama cook and distinguish verbally between the cows and chickens in the yard.

As the weeks went on, the language barrier transformed from a pesky little sister that follows you around to a more mature adolescent whom I reluctantly grew to respect. I had previously viewed language as a static tool that enables people to express themselves, and this was most certainly confirmed by my homestay experience; however, I began to gain an appreciation for language as a larger reflection of the values and attitude of the culture I was living in. 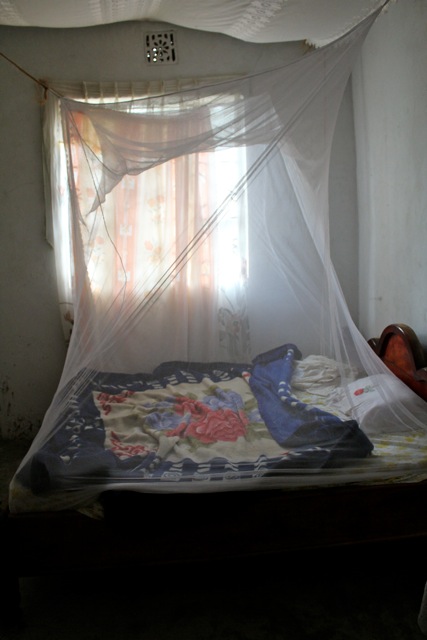 For instance, everyone in the village was referred to by their age group or position in the family; All women are addressed as Mama, men as Baba, young girls as Dada, boys as Kaka, elderly people as Bibi or Babu. Although these generic names seem unpersonalized and being called “Mama” or “Bibi” would likely insult many women in the US, the names take on an endearing quality. As you watch a woman get in a dala dala (a form of public transportation) and hand her baby to a stranger in the back seat to hold, the language is manifested. A Tanzanian woman is not just responsible for her children and her household, she is everyone’s Mama.

It turns out the phrases Hakuna matata (meaning ‘There are no worries’) and rafiki (meaning ‘friend’), made popular by the Lion King, weren’t bad words to know. Although the former is actually only used by businesspeople to attract the attention of Disney-loving tourists, the phrases hamna shida, hakuna matatizo, and haina shinda have the same meaning. Tanzanians have options when they want to express that there ‘ain’t no worries,’ which happens on an hourly basis — a direct reflection of the laid-back attitude that pervades Tanzanian culture.

One night on our walk home from dinner, fed up with relentlessly being called rafiki by strangers, a friend of mine half-jokingly replied, “I am not your friend.” The Tanzanian man calmly went on to explain, “In America, you have to know someone for years before you call them your friend. In Tanzania, everyone is your friend.”

From then on, all human interactions made more sense.

I’d like to believe that by the end of the three weeks I had become slightly more than a burdensome fly on the wall. I’d learned how to express an interest in my family member’s lives, share my thoughts and opinions, and even joke around a bit. I continually noticed new linguistic subtleties and made connections to the larger culture. As I repeatedly screwed up, grew frustrated, persevered and was rewarded, I learned more and more about myself and those around me.
For my final project of the semester, I made the rash decision to travel alone to an isolated village called Wasso to conduct a research project. I saw the opportunity as a challenge to test my language skills. To my contentment, it turned out I was then capable of making travel arrangements and functioning independently in a city. I was conversational enough to form meaningful relationships with Tanzanians who did not speak English and perhaps most rewarding, I earned the respect of many Tanzanians who at first glance presumed I was a random tourist ignorant of the local language. When bartering in Swahili, starting prices were automatically cut in half. Though I had a translator helping me with my research project, I was able to ask interview questions in Swahili and understood the gist of most responses I received.

As easy as it was to see the as language barrier as a hindrance to my experience in Tanzania, I came to accept that in large part, it was the experience. As I studied Swahili, I learned about Tanzanian values, attitudes and humor. I was more aware of non-verbal communication — body gestures and facial expressions — then ever before. And perhaps most useful upon return to upstate New York where Swahili-speakers are few and far between, I learned that when all else fails, even something as powerful as a language barrier can be overcome with a smile.

Abby Sophir is junior TV-R major who knows the true meaning of “The Circle of Life.” Email her at gsophir1[at]ithaca.edu.