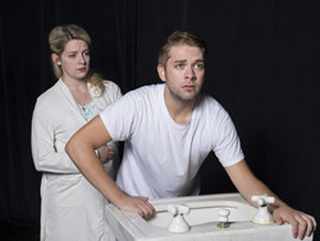 Ithaca College Theatre’s main stage productions kicked off their season with an interesting take on Tracey Letts “Man From Nebraska.”  The show is about Ken Carpenter from Lincoln, Nebraska, a man going through a mid life crisis and examining his faith in god. The play is about his journey to find meaning in his life through art, love and new friends. The heaviness of the show however, combined with the extremely slow pacing and sometimes-forced acting did not make this performance one of the best I have seen at IC.

The set and the costumes were very bland and ordinary, like the main character Ken Carpenter’s life prior to his breakdown. Sophomore Coleman Hemsath played Carpenter, putting on an all-star performance. Hemsath was clearly the star of the play not only because of the honesty in his performance, but also in the way he won over the audience, even under circumstances that would normally deter an audience from liking the character. Also putting on a great performance was junior Nicholas Carroll in his role as Reverend Todd. He plays a cheesy, awkward middle aged man who the audience loves for laughs. He really lightened the mood from the seriousness carried throughout the rest of the production.

Unfortunately, some other actors did not shine as brightly. Senior Emily Austin fell short in her role as Nancy Carpenter, a confused and frantic wife trying to understand the sudden change in her husband’s beliefs. A lot of her actions outside of the pleasant, housewife persona seemed forced, especially with exceptionally emotional scenes. She did a respectable job, but in comparison to her stellar costar she didn’t hit the mark. Sophomore Jasmine Harris, playing the bartender Tamyra, would have put on a reputable performance, but her constantly changing accent (which was supposed to be British) became distracting.

I think one of the major problems with the show was the maturity of the roles these young actors tried to take on. When addressing this issue, director Wendy Dann had no concern the cast would be able to convey the story despite their young age. “Rather than using gray hairspray and drawn-on wrinkles, we decided to let the audience see the ensemble at the beginning and embrace that these young actors will take on a variety of roles throughout the course of the play,” said Dann. In theory, I really like this idea. Yet, I do not feel it was executed properly. I would have liked to see the cast adapt their body language and speech to that of an older person. The only actor who did this successfully, other than Hemsath, was Carpenter’s mother Cammie, played by sophomore Cora Joe Anderson. Carpenter’s daughter Ashley, played by senior Maggie Moe, gave the impression she was an 18 year-old girl because of the youthful almost ditzy way she spoke. I didn’t realize her character was married until she said it in a fleeting line. Bud Todd, played by sophomore Matt Greenberg, also played his role too sprightly and young, making the audience have a difficult time placing exactly how old he was supposed to be.

I also had a problem with the pacing of the show. I understand the beginning of the show especially is supposed to be slow, boring and mundane to show the repetitive and routinely nature of their lives. However, at times I felt my mind drifting away because I was so disengaged.  The silences were appreciated and the slowness of the dialogue was effective, especially at the scene when Carpenter first realizes he is in a crisis of faith. I think it could have been even more powerful if the use of silence was a little less frequent to make the moments when it is really needed stick with the audience in an unforgettable way.

Please do not get me wrong; I think the performances by Hemsath and Carroll are enough to make someone want to see this show. The play also has a hilarious dance scene that will be sure to have you belly laughing. Overall, this was not my favorite main stage production but I appreciate the tremendous effort by the cast and crew of “Man From Nebraska.”