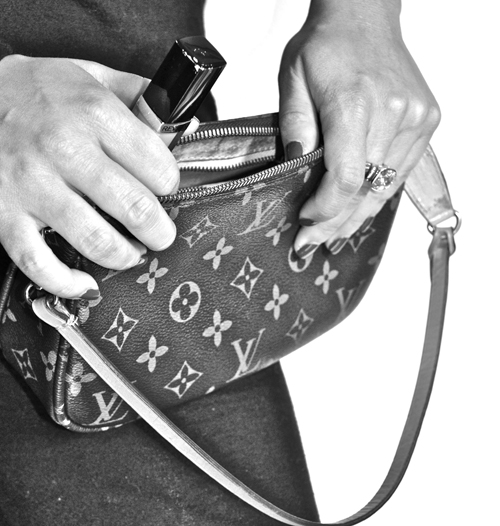 Our obsession with everything designer — on the cheap

One night as I was procrastinating writing this article, I clicked on a pop-up for an interesting website called TheRealReal. This members-only website specializes in designer resale and claimed to offer big-name labels such as Dolce & Gabbanna, Lanvin, Valentino and Prada at outrageously discounted prices. Soon enough, I found myself filling in the contact info with dreams of finding the perfect Manolo Blahniks that I could happily play out my inner Carrie Bradshaw in whenever I’m up against a deadline.

The site was interesting enough to say the least, and they did seem to have what they promised. However, as I browsed through the electronic racks of $175 dollar shirts (mind-blowingly cheap for Jean Paul Gaultier), I noticed something: Every single one of these articles of clothing was, at best, average-looking. I caught myself wondering, why do I even need these? And the answer automatically came to me. I want to see a Jean Paul Gaultier shirt in my closet.

What is it about designers that make us seem to put on rose-colored retail glasses when making purchases? Yes, it may seem to be a good deal, but is that rather average blouse even worth the discount price?

Mass retail stores like Target and H&M have been taking a similar route; these stores have collaborated with designers directly for highly anticipated, limited-edition exclusive lines. Within the past four years, H&M has collaborated with design houses like Lanvin and Versace, while Target has had numerous and highly successful lines with designers such as Vera Wang, Issac Mizrahi, Jason Wu and the Italian label Missoni. And every time one of these stores collaborates with a designer, the entire consumer public goes berserk.

The Missoni line may have been the biggest designer launch at Target. Customers foaming at the mouth charged the stores and website, causing merchandise to sell out before noon and the entire online store to crash, a Forbes.com article reported.

The reason for this fanaticism is deeper than simply getting a great deal. There is a very present desire to upstage and outshine one another, and as Kimberly Anderson, the marketing communications manager at Ithaca College, explained this is accomplished by putting emphasis on the designer’s name.

“They have to brand and market to individuals to make more money, reach a bigger audience,” she said. “It’s a form of brainwashing the masses into thinking they need something, they’re missing out on something.”

Flipping through any of my favorite magazines, it’s very hard not to envy the gorgeous models writhing in sumptuous Valentino gowns. These glossy, and heavily photoshopped, advertisements incite a desire to emulate the fabulousness of an unrealistic ideal.

“I think it’s fueled by insecurity,” Anderson continued. “Is owning a pair of $750 shoes really going to make me a better person?”

However, there are people who disagree. Jenny Barnett, the former executive editor-in-chief of Harper’s Bazaar and current media professor at Cornell University, explained that even though there is an aspect of aspiration to fashion, and therefore fashion has become a much larger part of people’s lives within the recent years due to an increase in media attention to this once-exclusive world.

“[Fashion] used to be more exclusive,” Barnett said. “It used to be just fashion editors who went to the fashion shows and only really the industry knew about fashion. Where now … there is much more coverage in the press … it’s become something that is more a part of mainstream life.”

Barnett explained that she considers this mainstreaming of a once notoriously exclusive industry to be both beneficial to the designer and the consumer. With the attention now given to fashion houses from people outside the industry, it opens up a much broader customer base, and the designer has to figure out a way to market their brand to every possible outlet.

“[Designer collaborations] are making designer names and designer clothing much more accessible,” Barnett continued. “Of course the fabric and the material are not going to be what you would get if you were to pay the higher prices for the main line, but you are getting the expertise of an amazing designer.”

Jed Wexler, the managing director of Eight-Eighteen Strategies, a fashion consulting agency in New York City, agreed that the more a designer or a company can do to reach a bigger audience, the better.

“Any time a brand can make their products and good design more accessible to a wider audience is a good thing,” Wexler said. “I think overpaying for ‘luxury’ products only caters to the materialistic brand-junkie. Aside from that, a great collaboration exposes both brands to a whole new audience and can result in some amazing product.”

Whether or not you aspire for the Valentino gown, or are just as comfortable in a great pair of Gap jeans, Wexler explained that designers are making it easier for customers to experiment with fashion and develop our own unique style.

“Lower-priced goods from the same designers proves that individual style is no longer about how much money you have,” Wexler said.

Sydney Fusto is a sophomore journalism major who launching a high-end snack line—exclusively for Wegmans. Email her at sfusto1@ithaca.edu.