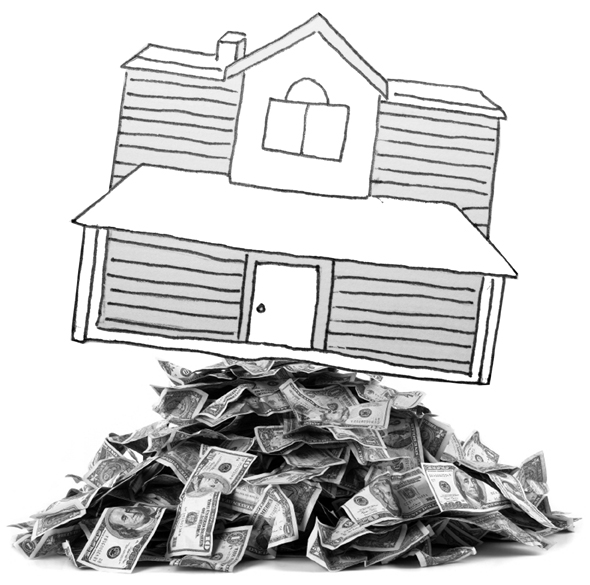 Some families donate rather than flaunt their wealth

The United States has an idealized view of wealth: that it will ensure happiness, solve personal problems and change a person’s entire life. For those who are wealthy, however, these assumptions can prove untrue.

Henry van Vuuren, a sophomore at Ithaca College, is just like any other student. But one thing differs: his family is wealthy, the level of wealthy where asking for $1000 was never a problem. van Vuuren said his family has multiple houses around the world and three yachts.

Born in Cape Town, South Africa, van Vuuren’s parents’ heritage goes back hundreds of years but his family was never very wealthy. When his father began selling insurance and his mother started working, they eventually rose to upper class status. Soon van Vuuren’s mother became even wealthier than his father.

After some time, van Vuuren’s parents divorced, and he and his mother moved to the United States. His mother, Carin van Vuuren,  worked in marketing, and remarried a man who worked for an architectural design company. After investing money in the stock market, their wealth increased and they moved to Scarsdale.

“Living in a rich town definitely is not easy because … your family has to be able to put down wealth to live there, but you have to be able to sometimes act like a rich person,” van Vuuren said. “It’s a very superior-inferior type of deal.”

Surrounded by money through high school, he said he wasn’t very popular because he had not known his classmates from the time of kindergarten. Van Vuuren said the majority of his peers only started to be nice to him after they discovered his family’s wealth, something he has tried to hide.

When he came to Ithaca College, van Vuuren decided not to discuss his wealth unless someone asked him directly. He doesn’t wear expensive clothing, drive a car or enjoy many of the other luxuries that his finances could afford him.

“It’s weird because when people know you have money, they start asking you for favors,” he said. “And they actually treat you differently because they know that you can put up the money and you don’t want that kind of treatment.”

Wealthy people, van Vuuren has found, can lack the values and personality that he values in his friends no matter their socio-economic class.

“Often times I see in rich people, there’s not a lot of substance,” he said. “Like when you get over the wealth factor, those people, they’re very shallow. They don’t have a lot to offer. They can’t really hold a conversation because without their money, they’re not really anything.”

If van Vuuren never moved to the United States, he would be in a very different societal position.

“If I lived in South Africa, I think I would be in a completely different class system as I would be now,” he said. “I think that I would probably be in like, a medium to poor class, because my father isn’t doing as well as my parents are.”

Through his mother’s example, van Vuuren knows that nothing comes easy, and that wealth has to be earned through hard work and dedication. No matter how wealthy his family is, they do not brag because they strive to be modest and donate to charitable causes. They donate their clothing when they no longer need it and once donated a car that they didn’t use. They balance what they want with what they need instead of buying everything that is appealing to them.

“She always taught me to push yourself as much as you can go,” van Vuuren said of his mother. “You have to work for money because no one’s gonna give it to you and that really carries on to my own beliefs, and I feel like she’s raised me really, really right.”

Van Vuuren is a planned studies double major in psychology and music. He hopes to create a music therapy major and help disabled children find an outlet through the use of music, even though it is not a profitable career.

“I want to do something that I love,” van Vuuren said. “I really don’t care about the money, so that’s how I know that [my upbringing and values] has affected me already.”

Carin van Vuuren is currently the Chief Marketing Officer at Usablenet. She has worked with brand consulting and management for the past decade, including some Fortune 500 and global businesses.

“We don’t think of ourselves as wealthy,” she said. “But rather consider ourselves fortunate to have had good career opportunity resulting from hard work and professional commitment.”

Due to the fact that hard work has been the basis upon which Ms. van Vuuren earned her wealth, she thinks about spending in terms of its relationship to what is necessary. Once that is covered, she then considers spending money on things such as vacations.

“When it comes to money, we try to balance what we want (here/now) and what we need (short/long-term),” Ms. van Vuuren said. “[We] take care of the important things first, like home, education, retirement, health.”

She said she doesn’t think wealth should affect how people act towards others. She and her family do not focus on their wealth as a core of their personalities, but instead on whom they are as individuals.

“The desire to ‘have’ things or to be considered wealthy creates pressure on individuals (adults and children) to behave differently,” Ms. van Vuuren said. “We care about character and values. Wealth can be fleeting. Values and character are enduring qualities and the real source of happiness.”

Those values are what keep the van Vuurens grounded, even though they are wealthy.

“It is important to remember that we are all humans, and no one is born ‘better’ than anyone else,” she said. “This keeps everything in perspective and ensures that you can be grounded in your outlook on life.”

The van Vuurens are not the only wealthy people who try to define themselves as more than their income bracket. Aaron Jackson, a 31-year-old from Destin, Fla., started a charity called Planting Peace. His grandfather was an architect who helped develop large resorts around the country and he lived on one growing up.

“I guess I was just very fortunate to have many doors opened for me, but I don’t think the being rich aspect was ever thought of any differently,” he said. “And in the place that I’m from, in Destin, pretty much everybody has money, so it’s not a big deal around here.”

When Jackson went to college, he didn’t do very well and decided to go backpacking around the world with his girlfriend. They started in Costa Rica and once there, Jackson found his passion.

“I saw a lot of poverty and it really just kind of woke me up, and that’s when I decided that I was going to come back and open up a charity,” Jackson said.

He started Planting Peace when he was 22 with John Dieubon after working for Homeless Voice in Florida. Planting Peace promotes peace in the world through different avenues, currently focusing on de-worming children in developing countries. Their goal is to de-worm one million children every month, with pills that costs only one and a half cents each.

“I think it’s kind of a shame, you know, that the world is such an abundant and wealthy place and yet people are literally dying over something that costs a penny,” Jackson said.

The organization is now entering a decade of existence, with more projects being developed to promote peace. Jackson thinks that his involvement in the organization has changed his view of wealth.

Through Planting Peace, Jackson found that everyone could pitch in a little more time or money to make the world a better place. He hopes that through his organization, people have a better chance of surviving disease and creating a peaceful world.

Kaley Belval is a sophomore documentary studies and production major who pays for everything in pennies. Email her at
kbelval1[at]ithaca.edu.