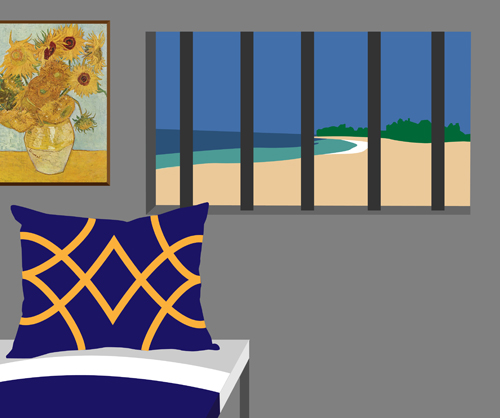 Luxury Prisons. It is a term that makes a lot of people uncomfortable. Why on earth would a prison be luxurious? Why do prisoners deserve any luxuries? What exactly is a luxury prison? One may imagine celebrity criminals trying to bling out their orange jumpsuits or rich criminals bribing guards to give them nicer sheets and food.

Turns out, one prison in Norway gives the term “luxury prison” a whole new meaning. It is a place that gives prisoners the “luxury” of actually getting better and seeing the error of their ways. This is a luxury that many criminals do not get in the United States, but it is one that these criminals might deserve.

Bastoy Prison in Norway has been acclaimed as the cushiest prison in the world. It could be compared to the many prisons in which upper class criminals go in the United States, such as Alderson in West Virginia — better known as “Camp Cupcake” according to NBC News — where Martha Stewart served her sentence for obstruction of justice and lying to investigators. That comparison would do it no justice though. What is different about Bastoy is that it houses violent criminals. John Sutter of CNN named it the holiday version of Alcatraz in his article entitled “Welcome to the World’s Nicest Prison.” His nickname is spot on.

In his article, John Sutter describes Bastoy and it’s many surprising luxuries. Bastoy Prison is located on a small island surrounded by one and a half miles of water. According to Sutter’s article, prisoners have access to a beach where they can sunbathe and an assortment of fresh farm products.

In a phone interview, Sutter agreed that “summer camp” would be a fair way to read this place. Everyday from 8:30 a.m. to 3:30 p.m., prisoners work jobs such as tending horses, gardening, working at the bookstore and chopping down trees. There are no uniforms for inmates. They wear what they want, as so do most of the guards.

Sutter said the most surprising thing about the prison “was how [the prisoners] were milling about so freely.”

He witnessed inmates coming and going as they pleased, and noticed they are only required to check in with guards every few days. Some are even allowed to go off the island to work toward the end of their sentences and are just expected to return back everyday.

There are many other prisons in Norway just like this. Statistics from Time magazine in 2010 state that around 20 percent of criminals in Norway wind up back in prison within two years of their release, while the U.S. and U.K. have a rate of about 50 to 60 percent. Norway has a lower crime rate to begin with, but one can wonder if this is because they have such a supportive and rehabilitative mindset there. That is a question that can get many minds reeling and wondering if the United States should adopt such a system.

John Laskowitz, associate professor of sociology at Ithaca College, thinks it would take a pretty big change in mindset of Americans if this type of prison were to be put in the United States. He does not feel a rehabilitative focus would be accepted in our culture.

“ [We] blame crime on the criminal and do not like to think about the social forces that contribute to crime and addiction,” Laskowitz said. “We love punishment and think that harshness will be a general deterrent to others. We are very wrong in that assumption.”

Attorney and prison expert Michele Deitch, who was awarded one of the most prestigious prizes for individuals working on criminal justice policy reform, thinks there are very few offenders that need to be locked up at all.

“We need to do a much better job of locking up people we are truly afraid of and not just the people we are angry at,” Deitch said.

She is a big believer in providing offenders with services that they need. Norwegian prisons like Bastoy give a safe place where criminals can reflect on their lives, grow as human beings and fix themselves.

To Deitch, our jailing system will get better once we stop locking so many people up and start helping them. Deitch’s idea would downsize the need for a lot of prisons here, giving our nation more of the nurturing and rehabilitative mindset that the Norwegians have.

For most people, it isn’t until we see a prison such as Bastoy that we either question our own system or stand even firmer for it. Both nations have very different ways of dealing with criminals, but it is interesting to imagine what it would be like if they both took a page from each other’s book. We could change our policies not only to help our criminals get on the right track, but to better our understanding and compassion for one another as a whole.

Mariah Flaim is a freshman journalism major who wouldn’t mind going to summer camp in Norway. Email her at mflaim1@ithaca.edu.