Home IssuesThrow-Away What Do You Do With a B.A. in English?
Throw-AwayUpfront

What Do You Do With a B.A. in English?

Fears and missteps in the undergraduate experience 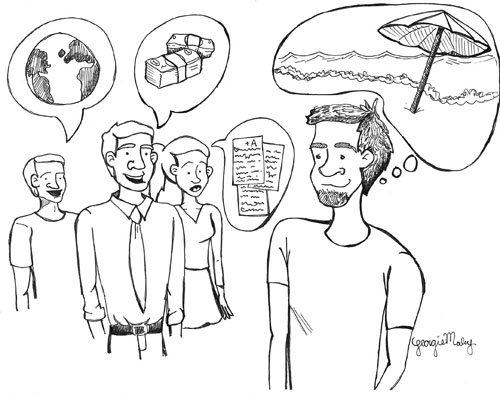 Haley*, a freshman at Ithaca College, has struggled with the fear of failing to meet her parents’ expectations.

“I think it’s a tough thing because I feel in a lot of ways I shouldn’t care, but I still do,” she said. “I still have that ingrained in me to care about what people, specifically what my parents think.”

Haley had trouble with her parents’ expectations for a while, but especially now that she is a television-radio major, they believe that she will not necessarily get a stable job.

Recently, her parents’ support has increased with her decision to minor in English so that she can eventually become a teacher. Both think being in education is a much safer decision than going into communications, but have asked whether making such a career switch would alter her passion for communications.

Colton Shoenberger is a freshman student currently majoring in business who is going to switch to mathematics-economics. He feels that societal pressure had a lot to do with why he originally chose to study business.

“I didn’t know what to do with my life, so I picked the most practical thing possible,” Shoenberger said. “If I followed creative passions, I probably would’ve done film or sound production or something in Park or something cool, but I didn’t trust in any creative ability because ‘getting a job in those fields is so hard.’”

He also said that societal standards have a lot to do with why there are such high expectations for students.

“Basically, everybody at some level or another has these expectations at some point in society, so it’s hard not to develop them because pretty much all interactions you have with people involve their expectations,” Shoenberger said.

Chris Zivalich is a senior journalism major with minors in German, women’s studies and honors. With less than a month until graduation, he has been considering the expectations placed on him as a soon-to-be alum.

Since he has been extremely involved in both academics and extracurricular activities, such as politics, Zivalich felt that his fears have come more from himself and his friends than any other source.

“It’s hard to say that right after college you’re really going to be involved in activism all the time,” he said. “One of my fears is that maybe I’m not as good at continuing that as some people might want me to be.”

David Jaffe is a junior who has never really been afraid of throwing his life away because of how he was raised. He discussed expectations with his friend who goes to Cornell.

The other frightening aspect of expectations is taking risks against the expectations that people have for one another, such as following what you want to do, which Jaffe says can be a really positive experience.

“If we didn’t scare ourselves, we would literally probably stay in bed all day and we wouldn’t care about any sort of desire,” he said. “And by scaring ourselves, we’re able to see how far we can be pushed and then see where our comfort is.”

Whether the pressure is from oneself, one’s friends, family or peers, it is challenging to find and create something meaningful in what one does at all times. But by realizing one’s own standards for oneself, it will be a much less stressful and unhappy experience.

*Name has been changed to protect anonymity

Kaley Belval is a freshman documentary studies and production major who can’t pay the bills yet because she has no skills yet. Email her at kbelval1[at]ithaca[dot]edu.