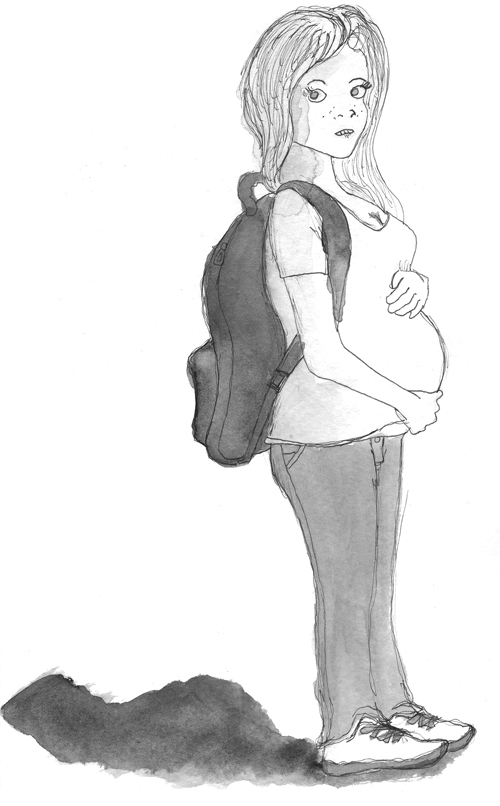 You know her. She may have been in high school with you; maybe she’s a cousin, a sister, a friend.  But when she got pregnant, it may very well have rocked your world.

Early pregnancy is not something that is looked upon kindly in this country. To be a teen parent is to be cast aside and condemned. We may enjoy watching teen moms scream at each other on MTV, but as soon as it hits home, we don’t find it entertaining anymore.

When Florencia Sadler, a freshman at Cornell College in Iowa, got pregnant at the age of 19, her life got a lot more complicated.

“My initial reaction was that I was excited to be a mom,” Sadler said, but upon assessing the situation she realized that things aweren’t as simple as she had perceived them to be.  Sadler had just finished her first year at college and her life plan, which is to work with immigration law, and had no room for a baby in the near future.

Her initial excitement quickly turned to panic, not sure where to turn or who to go to for advice, being that she lived in an area with little support for teen mothers. Luckily for her, her parents were willing to discuss the options.

“I had a long talk with my parents,” she said. “I got the motivation to think about what I wanted to do: finish the work I wanted to do at college.”

After talking to her parents, she decided that the best option for her was to abort the pregnancy.

“It wouldn’t have been a good life for me or the baby,” she said. “Looking back now, now that I’m back in school, I realize I want to finish school, get a job and I don’t know how I would’ve done that with a child. I’m not sure I would’ve necessarily thrown away my life, but more so the life of my child because I wouldn’t have the means to support it.”

Though Sadler felt she didn’t have the means to provide for her child, she stressed that early pregnancy is never the same for everyone, and that we should be cautious before we paint it with a broad brush.

“It all depends on the individual and how they deal with it and the situation,” she said.

While Sadler may have felt as if there was not enough support for her to bring a child into the world, Stefani Laflamme, a freshman at Holyoke Community College, was determined to beat the odds and have her baby at the age of 19.

“I was pretty excited,” Laflamme said. “I always wanted a child, but had second thoughts because of how people view teen pregnancy. I thought about adoption and even talked it over with the father, but when my daughter started kicking, I knew I wanted to keep her.”

For Laflamme, the main obstacle was not the fear of having the child, but rather the rigid social stigmas she experienced.
“They said I was trailer park trash; they said if it was black they didn’t want it around; they said I should get an abortion, that I was throwing my life away. They said all sorts of things similar to that. It was hurtful, but I basically started believing that they would learn to love her or they wouldn’t see me. She was a baby, who doesn’t love a baby?”

For Laflamme, her support system came in the form of friends and family. Her parents let her stay at home rent-free, her mother drove her places and put her on WIC, a nutrition program for mothers.

Laflamme feels that having this baby has made her a stronger person.

“Having a child forced me to grow up. I don’t party anymore; I have a good job, go to college, and am able to take care of myself. And having a child is the most beautiful experience anyone could have. Now, I am so happy to have a life with my daughter.”

But this theme of feeling cast-aside as a pregnant teen would appear to be all-pervasive. Maureen Reedy, who is the Family Services director of the TP3 program at the Child Development Council in Ithaca, has seen this unfold first hand in her position running the teen parent program.

“They certainly feel judged by society,” Reedy said. “They feel judged by teachers and other students at school and feel certain biases which make it difficult for them to succeed.”

Through her experience running the program, Reedy has garnered respect for the teen moms she’s worked with.

“I’m always learning from the teens. There is a remarkable capacity of survivors. There’s a lot of determination. Some of them have rough starts; some of them have come out of the foster system themselves. They care about being parents, and they care about their babies and they’re proud of their babies. It’s not easy. They struggle, but they’re motivated to do the best that they can,” Reedy said.

Perhaps she has a point; perhaps we should refrain from the harsh judgments. After all, providing for a child at such a young age is challenging enough as it is.

“Unless you are in their situation, you can’t judge. There needs to be a tolerance for all kinds of lifestyles and all sorts of situations,” she said.

Sadler believes this awareness will come through education.

“We need more sex education in schools and we need to teach people that there are options,” she said. “Younger women should understand that it doesn’t mean their life is over.”

Is this lack of education the root of our intolerance?  As Laflamme explained, her main problems were not within the physical pregnancy, but rather how others had thought about her. Maybe a more inclusive education would remedy this.

This is far from a simple question to answer. With every pregnancy comes a slew of different circumstances. No two pregnancies are alike and yet we continue to generalize. Perhaps it’s time we rethink how we deal with it. After all, who are we helping by casting aside the teen mom?

Timothy Bidon is a sophomore journalism major. Email him at tbidon1@ithaca.edu.