When you stop caring about beauty standards 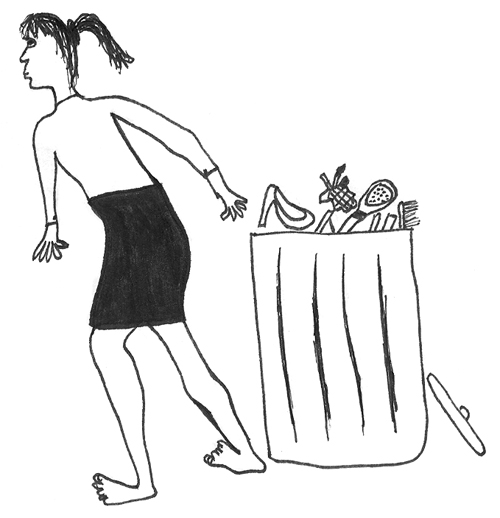 It is often said that beauty is in the eye of the beholder, but is that really true? In many ways, women and men are held to a societal standard of how they should appear. Unfortunately, this creates a society in which anyone who deviates from these standards is considered to be “letting him/herself go.”

Professor Whisman teaches a beauty unit in her Introduction to Women’s Studies course. She feels that there is one single standard of beauty in the United States to which all women are compared.

Throwing away one’s conventional standards of appearance is often defined by women choosing not to wear makeup, dress up, straighten their hair, or wear contacts. But often it is also by subscribing to an unconventional beauty ideal.

Sophomore Rebecca Billings feels that by not following conventional standards, she considers herself beautiful.

People are often treated much differently by society if they don’t make an effort to “enhance” their appearance.

“You know, [using] expressions like, ‘let yourself go’, ‘just doesn’t care anymore,’ that kind of thing… and so she’s seen as deserving to be treated badly or to be looked on as lesser than because she hasn’t  been willing to work at [her appearance],” Whisman said.

This is extremely difficult to deal with, especially when one tries to see him or herself as attractive in a society that may not consider them as such.

“If one woman believes that she’s beautiful without wearing any makeup or doing her hair or taking a shower, then it’s not going to make a difference if every single other person that she interacts with still doesn’t see herself that way,” Billings said.

She even pointed out the lyrics to the song “What Makes You Beautiful” by the band One Direction. She said that she found it catchy, until she heard the lyrics in the chorus: “You don’t know you’re beautiful/that’s what makes you beautiful”. In Billings’ mind this idea propagates the negative standards behind beauty, since girls who are attractive are still not supposed to be confident.

“I do think I’m pretty, and I think pretty much everyone’s pretty. But it’s like, once you have that confidence, it’s threatening to people,” Billings said.

Whether people subscribe to conventional beauty standards or not, they should not be told they’re throwing their appearance away. With personal appearance being such an individual choice, it is difficult to determine who or what is considered attractive.

Kaley Belval is a freshman documentary studies and production major who is beautiful no matter what you say/words can’t bring her down. Email her at kbelval1[at]ithaca[dot]edu.