Vintage and antique shopping around Ithaca 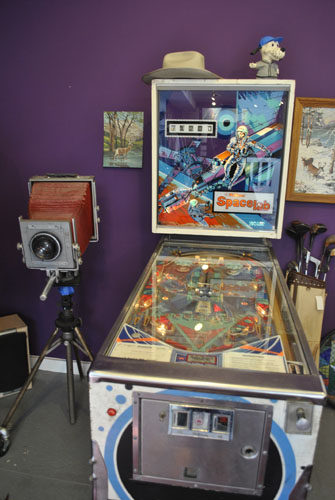 In the last decade, whether we have Mad Men or Zooey Deschanel to thank for it, the trend of antiquing has taken an upturn in fashion. Ithaca, a town known for sustainable enterprise, is a perfect place for finding vintage clothing and classic home decoration. From tea-length dresses at Petrune to Victorian-style teacups at Mimi’s Attic, Ithaca shops have the right tools to send you back to the 40s while remaining environmentally friendly.

Kelly Moreland, owner of Mimi’s Attic and Mama Goose, both located on West State Street, embraces antiquing in both her stores. Mama Goose, which opened in December 2004, is a second-hand children’s store that carries everything from sundresses to bicycles. Mimi’s Attic, which opened in June 2010, sells home furnishing items, from kitchen utensils to living room furniture. Both stores have an open door consignment policy, where anyone can come in and sell used items for cash or store credit.

“We get the majority of merchandise from people who walk in off the street or contact us,” Moreland said.

There’s certainly a respect for history in antiquing, but at the same time, the trend of revamping and “upcycling” allows total creative freedom in modern style. It’s a happy medium, a touch of the past with a stroke of imagination.

“Combining newer and older pieces really creates a nice energy. Both with second-hand clothing and second-hand furniture, it’s a really fun way to express your taste, style and creativity,” Moreland said on the topic of personal taste.

Pastimes, an antique store in the Dewitt mall, has been run by owner Adam Perl for 33 years. The store is an ideal place for finding vintage and costume jewelry and has an assortment of quirky odds and ends like historic postcards, vinyl records and old-fashioned cameras. Perl was inspired by his parents to open up shop, as they were antique collectors as well.

“I grew up with a lot of really nice things around me,” Perl said. “And I always admired their quality, style, material, and pride of workmanship.”

Perl first started collecting antique items in the 60s, when planned obsolescence began to rear its ugly head in American consumerism – a term that applies to merchandise that is designed poorly or made to throw away.

“Things that were made 100 years ago were made to last more or less forever, and that was what attracted me originally,” Perl said.

After working as a picker (someone who picks out antique items and then sells them to retail businesses) for three stores in New York City, Perl settled his business down in the Dewitt mall in 1973, when the building was being remodeled. While some of the merchandise in Pastimes is from individual sellers, Perl also buys from estate auctions – you can check out the items from the store on Ebay or Pastimes’ Facebook page.

Petrune, a vintage shop located on the Commons, has been a popular site for antique clothing and items since its opening seven years ago by co-owners Domenica Brockman, Justin Hjortshoj. The co-owners, who previously owned an antique store in NYC, meticulously choose the items at Petrune. Lucy Carey, who has been working at the store for four years, talked about Brockman and Hjortshoj’s buying methods.

“Most of our items come from our owners – they travel all around New York state and buy items wherever they can find them,” said Carey. 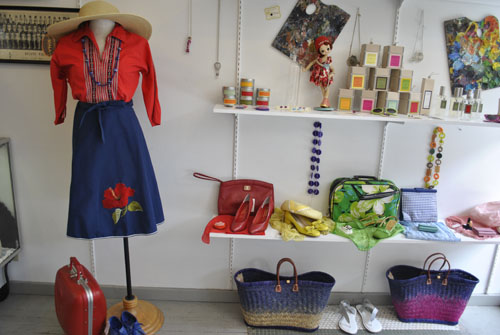 The items at Petrune are one-of-a-kind, ranging from an 80’s style pinball machine to 50s-era photo books of Marilyn Monroe. According to Carey, vintage dresses and sunglasses are the number one sellers – the dresses range from 40’s style sweetheart dresses to 80’s disco-ball gowns. The menswear section, on the second floor, includes a record selection and a variety of button-up shirts, cowboy-esque boots and Ray-Ban inspired sunglasses. The store sells its more valuable items on its Etsy page, where you can find the likes of Victorian-style jewelry and 20’s dresses.

“On Etsy, we try to have items that are too delicate to be on the floor…The [items are] a piece of history, not necessarily a garment to be worn – they’re more of display items,” said Carey.

Along with Etsy, the store has additional social media sites, including Tumblr, Twitter and Flickr, great for finding out about new items in store. The shop also has a supply of new products from brands like Tulle, BB Dakota, Dickies and Salt Water Sandals, as well as local items from One Swell Gal (handbags and tees), C Star Studios (metal-based necklaces and jewelry), Belle Epoch (feather-studded hair pins), and Cady Fontana (handmade necklaces). 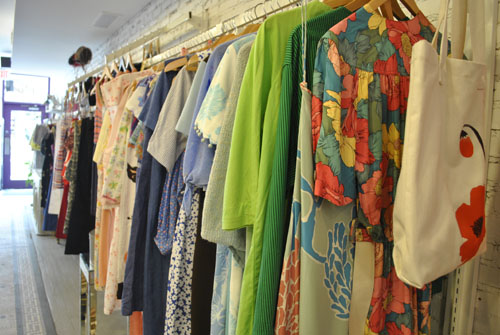 “We’re really selective about the handmade stuff that we have in the store, and we like it to have sort of a vintage style…we’d like to think that anything new we carry in the store will be in a vintage store in 20 years,” Carey said.

Whether you’re dressing as Betty Draper to a themed party or are looking for a new key piece in your wardrobe, Ithaca is a great place for antiquing when on the hunt for unique items.

Cat Nuwer is a senior writing major who is going on tour as a groupie for Antiques Roadshow. Email her at cnuwer1[at]ithaca[dot]edu.