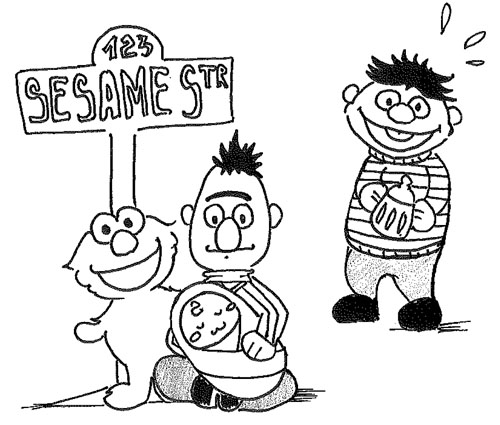 Last Monday at approximately 10 a.m. the New York Administration for Children and Family Services were surprised to find a furry, disoriented five-year-old digging through the trash outside a school for cookies and singing the alphabet to himself.

When asked where he came from, the boy replied, ‘Sesame Street’ and led police to an alley to his foster dad, Oscar the Grouch. The disgruntled homeless local admitted that he had found the boy as a baby abandoned in his trashcan, but was not his legal guardian, citing neighbors Bert and Ernie as his real fathers.

“While we may not have given birth to him, we still consider ourselves the boy’s fathers,” Ernie said. “It’s cruel, what they say about muppets not being suitable parents or having some kind of “muppet agenda” these days. That’s just not true. And while our son may not identify as muppet right now, we still love him for who he is.”

Child Services discovered that with Big Bird (the assumed leader of the gang), Cookie Monster and an eccentric eastern European immigrant who calls himself The Count, Bert and Ernie attempted to raise the boy as a muppet. Aside from his initial social awkwardness, the boy has an extensive knowledge of spelling, reading, math and music that far surpasses an average five-year-old. Daily Gang activities consist of singing together and learning valuable lessons.

“The boy has been surrounded by this environment every day for his entire life,” a Child Service representative said. “It’s enough brainwashing to make a human boy think he’s a muppet. This may take years of therapy to reverse.”

Kindergarden teachers say the boy is often seen teaching the other children songs on the piano, a skill he learned from Elmo, another member of the gang. The boy even attempted to indoctrinate the other students with muppet beliefs on equality and an undying love for learning.

Though muppets and police have come to an understanding (they stay on their side of town and police will turn their head from the international cookie trafficking), various mothers from the PTA have expressed concern recently about the discovery of the “muppet boy.”

“I don’t want my kids getting mixed up with his kind,” local mother Patricia Marsh said. “The next thing I know they’re gonna get my kid singing about love and diversity and crap.”

Law officials say they will be keeping an eye on the gang that calls itself a “family,” by monitoring its connections outside of the city limits. As of yesterday, there was a lead to a powerful muppet mob boss couple that go by Kermit and Miss Piggy.

Mariana Garces is a junior TV-R major whose Godfather is Mr. Snuffleupagus. Email her at mgarces1[at]ithaca[dot]edu