Finding profit at the dump 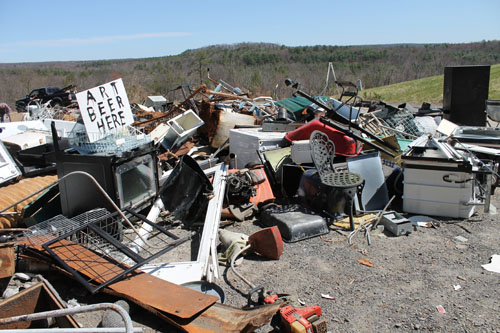 My family is extremely cheap when it comes to most things. We squeeze every penny, from buying clothes and food when they’re on sale to going to every free giveaway of food or prizes. We even save money by not having our trash picked up. Instead, every weekend my dad and brothers pack up the car with our garbage and drive up to the dump and recycling center that are close to my grandma’s house. It may seem like it is not worth the effort, but it does have its perks.

The things that have been brought home from those dumpsters over the past decade are astonishing. Our basement, garage, attic and grandmother’s garage are practically full of all this “junk,” as my mom puts it. To my brothers and my dad, everything down there has a purpose and is a treasure in its own way. They search, dig and they find working technology or equipment to use it for their own purposes. Because of all this we now own piles of other people’s garbage. My dad, John Tomkowid, sees this as a sort of pastime and a challenge.

“The good side to dumpster diving is ‘The Hunt,’ or looking for something of value. Basically it’s a hobby… plus the guys at the dump are like family. Also I have to go to the dump anyway to throw out our garbage!”

They may have to go there, but they always come back with someone else’s garbage. Irony? Yes, but again there is a good side.

While maybe half of the findings are rarely used, some items they have found like TVs and computers were things we used in our everyday lives. Rarely did we ever buy a new version of one of these items. With technology constantly upgrading, people are constantly tossing out of their outdated models. Up until LCD televisions were popular and cheap, when I came to college, I used a Dell desktop computer and watched my favorite shows on a Panasonic tube television that we found at the dump. Free stuff sure works for me. 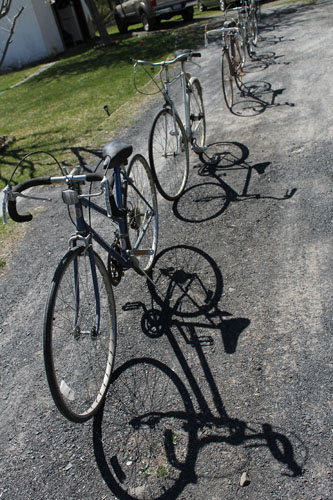 On the other hand, there is so much more garbage taken in by my family that has never been touched. My grandma’s garage has 12 perfectly fine bicycles in it. But there are only five people in my family. Most of the bikes are brand names, too, like Free Spirit, Suteki, and Peugeot and yet they are all just rusting away. My dad has his reasons for it though.

“I have so many bikes in the garage because when I was growing up I could not afford a good bike, so I had to piece my bikes together. The bikes that were in the garage are the same makes of the ones I could not afford. They are old but very well made in Italy, England, France, etc. They will be cleaned up and sold to people who appreciate them.”

We have been holding to the bikes for years. Maybe one day we will actually get to work on them while they are still worth something?

One time, in a stroke of luck, my brother Mike, found a pair of Bose speakers at the dump and sold them for $400 on eBay. That’s pure profit! So it is not all bad, and we’re not the only people who collect trash.

Saul, from the Olive Bridge Recycling Center, has also encountered some interesting items while working. He said the craziest things he has found were antique books and furniture. In some instances, he has found money stuffed inside such books. While he undoubtedly kept the money, he gave the furniture and books to antique dealers, free of charge. Since he did not have to pay anything to get them, he did not think it would be fair to charge him for them.

It is not unusual to go through garbage in the hopes of finding something great, but it is a little strange the amount my family does. But my family, as well as others, are benefitting from this rummaging. I know my family won’t be giving up the hunt at the dump any time soon.

“I pick things up from the dump because I think someone can use them: either in our family or someone else. I have used them myself, fixed them and given them away, donated some items to Goodwill or learned what was wrong with some of the items and got an education on how they work and how they are made,” said dad.

I suppose as long as someone (including my dad) is enjoying what he or she has then, nothing has gone to waste.

Kristen Tomkowid is a freshman journalism major who knows a guy who can hook you up with a sweet bike. Email her at ktomkow1[at]ithaca[dot]edu.