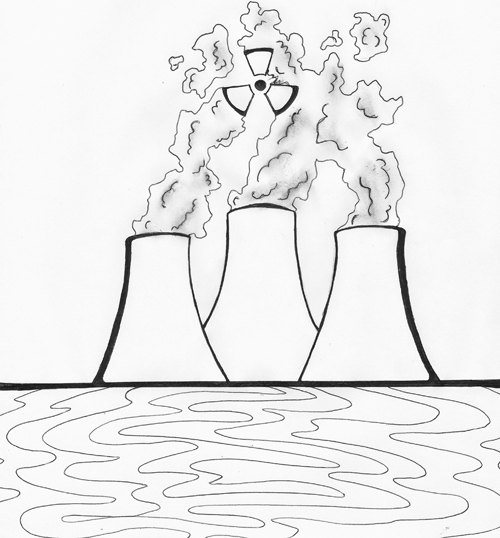 The year 1979 marked the first major catastrophe associated with nuclear power: the partial meltdown of Three Mile Island Nuclear Generating Station in Pennsylvania. Although no one was killed, injured, or suffered adverse health effects due to the accident, the site emitted a large quantity of radiation as a result.

Seven years later, an experiment gone awry caused an explosion in the Ukrainian Chernobyl Nuclear Power Plant, causing the worst nuclear power plant accident in history. The catastrophe led to 237 incidents of acute radiation sickness (which is potentially fatal) and 31 deaths. Both areas are still deserted due to the dangerous levels of radiation that permeate the environment.

Most recently was the Fukushima Nuclear Power Plant disaster in March 2011. After earthquakes shook Japan, three of the plant’s reactors (out of six) underwent full meltdowns. Although there were no immediate deaths, it is estimated that over 300 people have suffered significant radiation doses, according to USA Today.

Although no new nuclear power plants have been built since the Three Mile Island disaster, nuclear energy is still prominent in the United States and its increased use is being considered. The Nuclear Regulatory Commission (NRC) has approved licenses for four new reactors at two sites this year. However, the NRC granted these licenses as a result of The Energy Policy Act of 2005.

According to David McIntyre, the public affairs officer for the NRC, this Act included incentives for utilities to submit applications to the NRC for new reactor licenses. These incentives included loan guarantees to build the reactors, administered by the Department of Energy (DOE).

“So it was in part national policy that said, ‘We want more nuclear power,’” McIntyre said. “The applications for the four new reactors came in early, around 2007 and 2008, before the economic downturn and, obviously, before Fukushima.”

The usage of nuclear power is increasing in the country, despite the recent disaster at Fukushima. However, according to McIntyre, the country is searching for sources to fulfill their energy needs without using coal, which is the most common energy source in the U.S. according to the DOE. The country’s energy demands are projected to increase.

“Earlier last decade there were projections of large increases in demand for electricity,” McIntyre said. “Especially in the South and Southeast, in the sunbelt states, where the population is growing.”

The four newly licensed reactors will be built in the Southeast, where many nuclear reactors are already located. The Southern Alliance for Clean Energy (SACE) has been protesting the building and reopening of nuclear plants in the region, working on both local, state and federal levels.

On the local level, SACE has focused on raising awareness about ‘nuclear cost recovery’, or the controversial practice of energy companies charging their customers for constructing new nuclear reactors.

“When you talk about nuclear power in general, it’s hard to get the larger public riled up about it,” Mandy Hancock, the High Risk Energy Organizer at SACE, said. “So we focus on the economic aspect of it, because that is cross-party when it comes to politics. If you just talk about nuclear energy, radiation, water, and more environmental and health concerns, it automatically marginalizes the topic and makes some people think, ‘Oh, it’s just those environmentalists causing problems again.’”

Regardless, SACE works consistently with governments to raise awareness of these other issues surrounding nuclear power. For example, the organization advocates that the NRC stop licensing new reactors until the Fukushima disaster and its consequences have been fully analyzed and understood by experts.

“So even when we’re organizing on the public level we may not focus on [environmental issues],” Hancock said. “But it’s definitely an undercurrent in everything we do, and when we do legal and advocacy work, it definitely has a lot more of the safety discussion embedded in that aspect.”

Although McIntyre points out that nuclear energy has a very good safety record overall, there are still other energy alternatives that are progressive, cleaner and safer.

“I would urge people in the market place who are concerned about their energy consumption and energy future to first consider their building efficiency – meaning where they live and where they work,” Casey Mastro, the Chief Operating Officer at SunSky Energy LLC, a Finger Lakes region energy efficiency company, said. “This isn’t an alternative to nuclear, but at any starting point when we talk about the possibilities of nuclear energy as it pertains to residential and commercial buildings, I feel that it’s pertinent to understand the importance of creating an efficient building system first.”

“On a state-by-state basis, the solutions that work in one state won’t always work in another,” Hancock said. “But efficiency can work everywhere because every state has a way to go to maximize the efficiency that they have available to them and in just reducing their need for electricity to start with.”

Because of our country’s vast geological and climatological differences, the renewable energy sources that would be ideal for each state also differ. For example, in terms of Ithaca, solar is the most ideal.

“Due to advancements in technology alone,” said Mastro. “I would say that solar, in this area, determined by proper design and materials, can be a fantastic alternative to nuclear energy. You know what they say – they say that a horrible solar spill is just a sunny day.”

Jessica Santos is a junior writing major who supports bicycle power. Email her at jsantos1[at]ithaca[dot]edu.