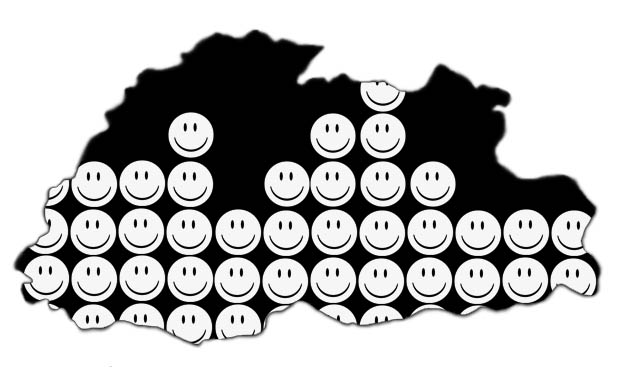 While the United States and other countries of the West worried about the state of the  economy in 2008, there was a small kingdom-democracy between India and China that didn’t feel the need to be alarmed by a decline in their Gross Domestic Product (GDP). A GDP is currently used to define a country or region’s production based on ownership and geographical location, respectively.

The Royal Government of Bhutan, since the 1970s, has utilized the concept of Gross National Happiness (GNH) to measure the country’s social and economic welfare instead of GDP. It wasn’t until 2005 that the system was clearly established, and the first complete survey results were published in 2010.

Many people may question if this system really measures happiness, but a main question is: Does GNH really work as a measurement of social and economic status? Or is it a utopian concept, something too good to be true? Could it be the right way to measure society’s development and welfare, something highly idealistic but still attainable?

Chris Sperry, director of Project Look Sharp who recently traveled to Bhutan to teach media literacy, said that “like all utopian projects it is littered with realities.” To him, GNH can be very idealistic, but it can become a reality if we approach it with high standards.

Sperry said that Bhutan doesn’t want to be a wealthy country, and he wonders if other countries should follow.

“At some level, [GNH is] a very practical recognition that the goals of society shouldn’t and can’t be traditional economical figuring because it doesn’t represent what the real goals of society are,” he said. “People aren’t necessarily happy in a society defined by GNP. You can have a society that is low on its national income, but the people are happy.”

Sperry disagrees with skeptics’ claims  that GNH is superficial and utopian, because GNH is defined and practiced by many elements of wellbeing, not just happiness, he said.

According to the Centre for Bhutan Studies, a Bhutan-government research institute that developed the metrics for GNH, the concept of Gross National Happiness is divided into four pillars: good governance,  cultural preservation, sustainable socioeconomic development and environmental conservation. These four pillars are further divided into nine domains: psychological wellbeing, health, education, time use, cultural diversity and resilience, good governance, community vitality, ecological diversity and resilience, and living standards. From these nine domains there are 33 components that are computed into the GNH Index.

The Centre for Bhutan Studies states on its website that “the objectives of Bhutan and Buddhist understandings of happiness are much broader than what is referred to as ‘happiness’ in Western literature.” Does this mean that GNH is non-applicable in a Western country like the United States?

To Frank Dixon, a sustainability advisor to some of the largest companies in the world, including Wal-Mart, it is possible to adapt GNH to Western society if we follow three steps. First, the community has to decide together what an ideal society is. When this definition is established, the community can then decide how they are going to measure their progress toward their goal. It is at this stage that metrics like GNH can be considered as better systems than GDP. The last step is to keep up with the established plan and reach out to other communities to show them that a better society can be achieved.

Linda Wheatley, president of the non-profit organization Gross National Happiness USA (GNHUSA), agrees with Dixon’s three-step plan. She emphasizes that the most important step now in the United States is to inform the citizens what GNH is and why it is necessary to change our metrics to measure society’s wellbeing.

“There’s nothing more important than a group that has a mission with real data and information. Like the Occupy movement, with these kinds of groups you can change things drastically because of all the energy and creativity that people get when they feel passionate about something,” she said.

U.S. state governments have already started to apply measures that resemble GNH. Maryland, for example, uses the Genuine Progress Indicator (GPI), described on the state’s website as a tool that “provides citizens and policymakers fruitful insight by recognizing economic activity that diminishes both natural and social capital. Furthermore, the GPI is designed to measure sustainable economic welfare rather than economic activity alone.” Sustainable Seattle, a non-profit sustainability organization in Seattle, Wa., has its own Gross National Happiness regional survey and The Happiness Initiative, which does a national survey of the wellbeing of the country.

Dixon quoted Einstein to describe why we need to change our metrics of social wellbeing: “We cannot solve our problems with the same thinking we used when we created them.”

Nicole Arocho Hernåndez is a sophomore writing major who believes you can’t buy happiness. Email her at  narocho1@ithaca.edu