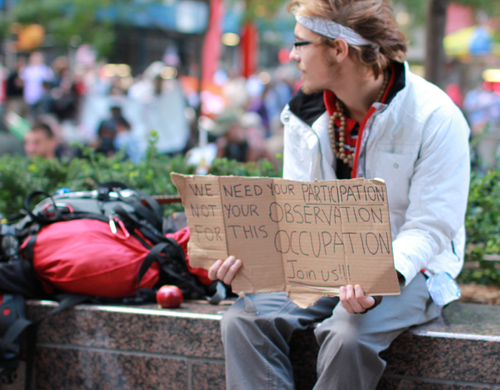 Residents supporting the Occupy Ithaca movement held a general assembly today in DeWitt Park. Topics discussed at the meeting ranged from announcing upcoming community events the Occupy group plans to support, such as the May Day celebration, to discussing current events and bringing new motions to the floor.

One resident suggested a demonstration to oppose the United States’ policies in the Middle East and rally against possible military intervention in Iran.

“There is a lot of misinformation. We need to have a conversation,” he said. “I feel it’s very urgent because we can learn a lot about democracy in the U.S. by looking at what’s really happening.”

Meeting facilitator Keir Neuringer said the goal of the Occupy movement is to make the government more accountable for its actions and to show that ordinary citizens still have a voice in politics.

“I remain positive about my participation and my involvement. There’s a sort of thing I keep in my mind: pessimism of the mind, optimism of the will,” Neuringer said. “Even when things in reality seem like they’re a challenge, you keep moving forward.”

Neuringer also said that patience and determination are necessary to accomplish reforms the movement seeks to address.

“Even if we don’t get anything done, we don’t decide on a specific thing we’re doing, we don’t achieve some major goal, the goal is the process,” he said. “That’s largely what the Occupy movement is trying to change anyway. Change the process because the process isn’t working.”

The Occupy Ithaca group hold assemblies every Sunday at 2 pm in DeWitt Park. Check out more information at OccupyIthaca.org