Looking Back on Local Racism 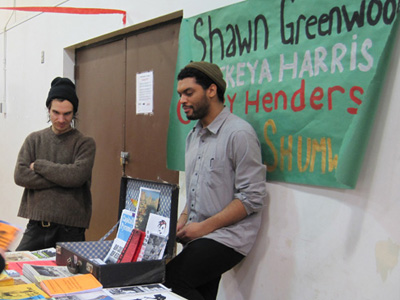 In November 2011, the unofficial renaming of Dewitt Park to “Shawn Greenwood Park” by members of the Occupy Ithaca movement inspired the formation of the Shawn Greenwood Working Group, through which addressing issues of racism in Ithaca has become a part of localizing the national movement.

The park and the group were named in honor of the late Shawn Greenwood, an African American resident of Ithaca who, at the age of 29, was fatally shot by an Ithaca Police Department officer during a narcotics investigation on Feb. 23, 2010. This incident has divided the community over larger questions of police brutality and racial profiling.

In an attempt to issue a search warrant, police officers from various New York police departments had surrounded Greenwood’s van in the parking lot of Pete’s Wine & Liquor store. According to the public statement of Special District Attorney (SDA) Weeden A. Wetmore, the officers broke out the front driver and passenger windows before asking Greenwood to show his hands. The statement reports that in an attempt to flee, Greenwood struck a Dryden police officer with his vehicle, causing Ithaca Police Sergeant Bryan Bangs to fire shots at Greenwood’s chest out of fear for his and the Dryden officer’s safety.

Following the SDA investigation, Bangs was exonerated of any wrongdoing in the incident.

The Truth and Reconciliation Committee of Healing Ithaca, a group of community members who began meeting after Bangs’ exoneration, has since called for a federal investigation into the death of Greenwood. The committee is questioning the testimony that the Dryden police officer had been in front of and knocked down by Greenwood’s van, on which the justification of Bangs’ use of lethal force is based.

According to the written request to the Department of Justice, the committee had conducted its own inquiries regarding the incident and found that there was a witness who testified that the officer was never in front of Greenwood’s van. This testimony was left out of the SDA’s report.

On Feb. 26 of this year, the Shawn Greenwood Working Group hosted a Black History Month expo titled “Strengthening Community Through the Loss of Shawn Greenwood” in collaboration with the Southside Community Center, an event that drew about 60 members of the local community.

Working group member Clare Grady, who also serves on the Truth and Reconciliation Committee, addressed the crowd at the event and collected signatures on the request for the federal investigation.

“If we want to, we can use this as a tool to say no to the double standard that allows Shawn Greenwood to be killed and life go on as normal, and then subsequent youth of color be killed,” Grady said to the crowd.

Through other events, such as educational workshops, the working group is aiming to raise awareness and inspire conversation on how racism can function on a local level.

Working group member Nydia Blas had been friends with Greenwood and connects his death with her engagement in activism. Before Occupy Ithaca began, Blas participated in Occupy Wall Street, where she was struck by conversations regarding race and by a meeting she attended with a “People of Color” working group. She made it a goal to then bring the conversation of race back to Ithaca.

“Race is obviously a big issue in our country period, but I think especially in terms of the Occupy movement … race has to be a really integral part of that conversation,” Blas said. “If you’re talking about new laws that uplift people, the hope would be that you would start at the bottom and pick people up where they’re the most attacked by our system. So that would be poor people and people of color.”

Blas, a 2011 graduate of Ithaca College, invited Paula Ioanide, IC assistant professor in the Center for the Study of Culture, Race, and Ethnicity, who she had taken several classes with, to lead workshops put on by the working group.

So far, the working group has held three workshops. One workshop, for example, focused on race and wealth accumulation, particularly in regard to Ithaca’s neighborhoods and housing. The workshop was followed by “walking tours,” where participants walked through local neighborhoods to observe systemic inequalities that stem from there being historically higher property values in predominately white neighborhoods.

Currently, the working group meetings remain closed. Blas and Ioanide both attribute this decision to allowing for efficient organization among individuals who already have an understanding of the issues at hand.

Ioanide said the group is currently working on explaining racism in a structural context to community members.

“How do you get people to see the problems that other people don’t see? White people in Ithaca and white liberals in Ithaca tend to not see these as structural problems. They tend to have a view that racism is a few bad apples, a few bigots who say bad things,” Ioanide said. “So they don’t necessarily have an analysis of the way that it works structurally or systemically, and it’s in these conversations that they gain the language and the ability to see what the problems are.”

Blas said her hope right now is that people continue to attend the workshops and events put on by the group.

“It’s really nice to see the same faces and same people,” she said. “I think it means that they’re invested in the conversations that are taking place.”

Gena Mangiaratti is a junior journalism major who has a dream that one day in Ithaca … Email her at gmangia1@ithaca.edu.