The continued struggle for an Asian American Studies Program 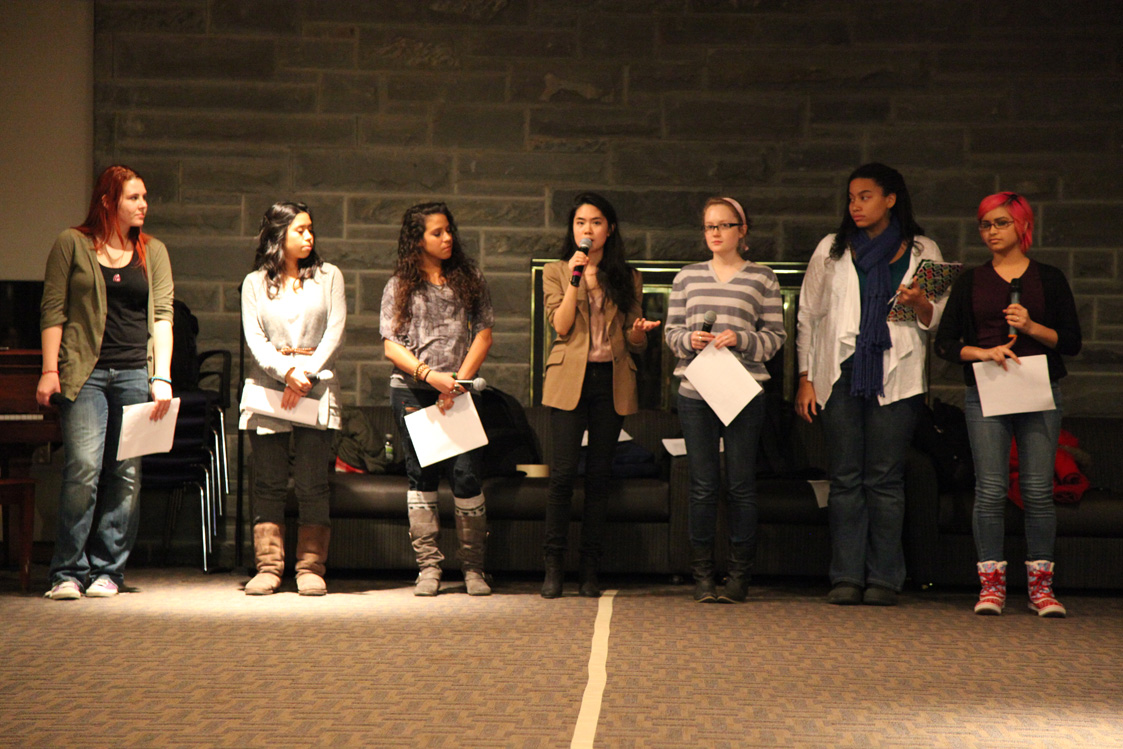 Step into any U.S. history classroom or open any U.S. history textbook and the chances of an Asian American figure being the topic of discussion are rather slim. This is why one Ithaca College student organization continues to fight for an Asian American Studies Program, emphasizing that Asian American history is American history. This organization, called the Committee for Inclusive Education, hosted a Power Shuffle event on Mar. 1 to continue having the discussion on identities and how they are included in education.

During the Power Shuffle, the approximately 40 student attendees stood around in a circle in Clark Lounge as the Committee members asked them questions, such as “Do you see your racial identity represented in your history books? If so, step into the circle.”

Tim Bidon was one of several white students who stepped into the circle after this question was asked. Bidon said it was important to be reminded how much privilege white people continue to have.

“Diversity, especially at a college like this, doesn’t get talked about very much — it’s sort of just like the elephant in the room,” Bidon said. “A lot of people at the college come from virtually the same background, so I sort of went to Power Shuffle to talk about and explore the diversity that does exist on campus.”

Kristiana Reyes, one of the founders of the Committee for Inclusive Education, said the event accomplished its aim of sparking conversation concerning identity representation in education.

Reyes said, “The goal was to bring a really diverse group of people across all areas of the identity spectrum together to talk about these things we never talk about in terms of identity and to show we all have privilege, and we have to use that to rewrite the narratives we tell.”

Reyes, along with students Kristy Zhen and Kaitlin Hibbs, founded the Committee and kicked off advocating for the minor by hosting Derek Chang, a professor from Cornell University’s Asian American Studies Program. This past Fall, the three screened a documentary they made titled “Missing in History,” which discussed the struggle to get a program. The Committee also hosted an identity panel, where students of various racial and gender identities discussed their experiences in the educational realm.  The Committee also gathered more than 400 student signatures in support of a program.

Bidon said he would take an Asian American Studies class if a program were created.

Reyes said Asian Americans are often oversimplified as a culture.

“Due to the media and due to not having Asian Americans represented in our curriculum, it’s perpetuated that we’re all this homogeneous group,” Reyes said. “That could really be challenged through education.”

In 1999, Ithaca College’s Center for the Study of Culture, Race, and Ethnicity was created to develop an African, Latino, Asian, and Native American or ALANA-based curriculum. Asma Barlas, CSCRE program director, said that in order to develop new programs, the college has to have enough faculty on campus offering courses that can become part of that program. In 2006, the African Diaspora and Latino Studies minors were created. Barlas said now that there are enough professors offering courses concerning Asian Americans at the college, a program is ready to be implemented.

Last month, Barlas submitted a proposal for an Asian American Studies Program to the Provost’s office. The proposal also requests one full-time faculty hire to teach only courses in the program. Barlas said this faculty member would be needed to create the program, and she hopes the Provost approves of both the minor and faculty position so CSCRE can start the hiring process this Fall.

Barlas said the college should finish its curriculum dedicated to diversity.

“Either this college shouldn’t have something called ALANA or if it does, and we’re an educational institution claiming to deliver an ALANA-focused curriculum, then we need to be able to deliver a curriculum that’s complete,” she said.

Meanwhile, the college is in the midst of promoting its IC 20/20 plan, which would require students to take one diversity-focused class prior to graduation. The plan is also publicizing an Ithaca Center in China, though an Asian American Studies Program is not mentioned.

She said, “There’s all these kinds of diversity promotions, like ALANA, and they say, ‘We’re so diverse. We represent all these different identities.’ But they don’t actually recognize us in our curriculum, so I think there is a huge hypocrisy in that.”

Barlas said, “When it suits the institution it draws out the diversity card, but when it comes to actually putting resources into developing those programs then of course we have to compete with tons of other things. So I hope the college approves of the program and demonstrates its commitment to diversity.”

Alyssa Figueroa is a senior journalism and politics major who wants to see ALANA completed. Email her at afiguer1[at]ithaca[dot]edu.