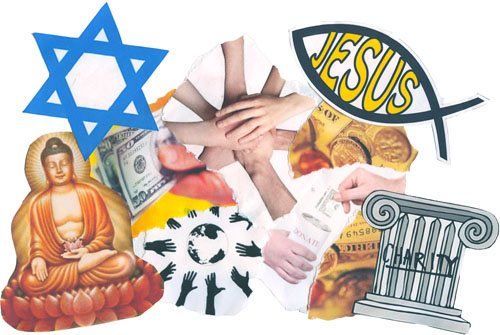 For Catholics, charity is based on love. For Protestants, it is an urge that comes from within. For Jews, it is the need to be righteous. For Muslims, it is one of the Five Pillars of Islam, a compulsory act. For Buddhists, it cleanses you of personal greed. In today’s secularized society, which one of these definitions fits best? Or do none of them?

What is motivating people today to give back to the community?

For Michael Faber, leader of Hillel and Chaplain of the Jewish community in Ithaca College, philanthropy has distorted the meaning of charity because it doesn’t promote selfless acts.

“With philanthropy, charity has become a contest to see who is the best one. People are acting in their communities because of ego reasons,” he said.

By doing the right thing for the wrong reasons, we may be redefining charity in the 21st century.

Reverend Richard Rose, of First Baptist Church in Ithaca, thinks the meaning of charity has changed because the real goal of charity, helping those in need, has lost its significance.

“Charity is the temporary levitation of a person’s hardship without a full understanding or desire to formally end the cause of that person’s difficulties,” he said.

Charity today is focused on the emotional or spiritual condition of the giver as opposed to the recipient, he said, and this leads to the perpetuation of poverty as big companies and organizations do acts of charity that do not solve the root of the problem in impoverished communities. A lot of people and organizations do charity because they feel good when they do so, he said, but aren’t concerned that much with the real issues at hand.

“Why does the Salvation Army never stop and say, ‘Shouldn’t we be working toward the day when we can stop ringing bells and stop feeding people?’” Rose questioned.

Lidia Rodríguez noticed the changes in charity Rose described when she traveled across Central America as a Catholic missionary. She realized that preaching and giving food to starving people once a year wasn’t enough to help them have a better life in the long run. In order to provide better health services to poor people in the Caribbean, she founded the nonprofit organization Fraternidad de Médicos Misioneros (Fraternity of Missionary Doctors) five years ago. The FMM does three-day to week-long trips to the Dominican Republic and Haiti at least twice a year. On each trip, a team of volunteer doctors, nurses and assistant staff provides medical treatment to poor communities that otherwise wouldn’t be able to receive healthcare.

Each trip costs around $5,000, strictly on medicine and supplies for patients, so they can’t do as many trips as Rodríguez would like. But she finds strength and motivation in her faith.

“Saint Paul said that a faith without action is a dead faith,” Rodríguez said. “Where you put the word of the Gospel you should put your actions as well.”

To Faber, charity must be performed out of a sense of righteousness that every human being possesses. When you give selflessly you get connected to the harmony in the universe, he said.

“You are not only helping someone else have a better life, but you refine your own being as well,” he said. Charity then becomes a process of renewal for both the serviced and the supplier of the service.

In order to seek both short and long-term solutions, the Catholic community at IC uses the “two feet model” to guide them in their charity work, Steve Hill, campus minister at IC, said. Just like we need two feet to walk, two elements are crucial while practicing charity: direct social services and social change, he explained. The community serves in Loaves and Fishes throughout the semester, but they also have programs in Guatemala and West Virginia during the summer and winter break, respectively.

Rose names the lack of empathy to others’ suffering as a cause of a loss of focus on charity.

“I think empathy, to suffer with someone, is very difficult,” Rose said. “I believe few people can do that because [it] means that you have to take on their struggle as your own.”

He said that we should put ourselves in other’s shoes.

“Would you accept to be underpaid, mistreated, undervalued, objectified?” he questioned. “If we were truly empathetic with the whole of humanity, we wouldn’t accept that anyone be treated that way.”

To Rose, charity will be practiced rightly when we understand that humanity is a big family.

“I think the message God has for us is that we are all a family, but we need to start acting that way.”

He compares doing charity without empathy and social justice to eating a bag of potato chips.

“It gets the job done, but it doesn’t really adjust to your body’s needs nor provide good nutrition. It’s a shortcut. And it never gets to go to where you wanted it to go in the first place.”

Nicole Arocho Hernández is a sophomore writing major who likes a side of potato chips with her social justice. Email her at narocho1[at]ithaca[dot]edu.