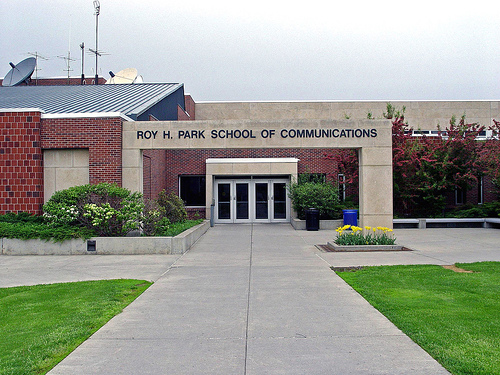 The Park School of Communications

On Tuesday, Feb. 21, Park School Dean Diane Gayeski hosted a “State of the School” meeting in Park Auditorium to go over what’s new with the Roy H. Park School of Communications. More students, new majors, Ithaca College’s possible move Downtown and a sweet hotel deal were all on the agenda, among other items.

Perhaps the most concerning announcement was the “small growth” that will occur in the Park School. About 50 additional students – I know 50 seems small, but when will it end? – will be added to the school in the upcoming years. Most will partake in Park’s new Emerging Media major and masters program in Communications Innovation.

“The Park School doesn’t have room to grow much more considering our facilities,” Gayeski said, noting that the need for more space in Park “isn’t falling on deaf ears.”

Concerning space, Gayeski talked about the new Creative Media classroom in the Park School, which overtook a previous lounge for philosophy majors (after all, who needs ’em anyway?). She said Integrated Marketing Communications majors, especially Ad Lab students, now have an adequate space to work. She also said the school has rented a temporary space across from the Park School – near the loading dock – which students can use for sets and special effects. Gayeski said she got the idea from members of an ICTV show who were using the space.

When one audience member asked Gayeski if she has thought about other spaces for the Park School, she responded that IC has been looking into moving some administration offices Downtown. As for actually expanding the Park School, Gayeski said she would love to add on to the building, but that an expansion would be expensive and that she would have to create a clearer vision of what the new space would be used for.

IC is in the process of signing a deal with a corporate chain of hotels so students can possibly live in them while studying abroad, as well as be a place for conferences or other academic trips throughout the country. Reportedly, there will be four to five sites in New York City, three in London, one in Washington, D.C., and one in San Francisco. What does this mean for you? All IC students and faculty will supposedly get discounted deals on these hotels, so the next time you’re upset about tuition increases, just remember this corporate investment and how cheap your hotel stay can be. Oh, the possibilities!

S’Park : S’Park classes are now required for all Park School freshmen. The course allows student to immediately engage with alumni and other professionals via meetings, Skype sessions and more. Gayeski said it’s not really about networking but rather learning about real-world problems within the media today.

Faculty searches: Four faculty searches are currently being conducted in the Park School. The positions are for Cinema Production, Screenwriting, Corporate Communication and Screen Studies, which will be offering a tenured-track line.

Merging TVR & CPMA: The Television-Radio and Cinema, Photography, and Media Arts departments will be merging because there is much overlap within the two departments, especially overlap concerning faculty expertise. Plus, Gayeski said, “It’s no longer appropriate to identify departments by their media platforms … TV-R department doesn’t equal a TV-R major.” The department is yet to be named.

New Degrees: The new Emerging Media major is well underway, and students will be able to major in it or transfer into it in the fall. Gayeski said there were major roadblocks for this initiative because it is difficult to create a major that crosses schools. Students can enter the major as a Park student or a Humanities & Sciences student in the Computer Science department. A new executive masters in Communication Innovation, an online course, will be available in the Fall of 2013. The class will hold about 24 people, all of whom are in their mid-careers and are successful in their own areas of communication. Students will have the ability to travel to various locations to study media technologies throughout the world.

Mini-courses: Gayeski is trying to increase mini-courses so faulty members have the opportunity to share their expertise with students. This semester’s Media for Social Responsibility course will be Mar. 29-31 and focus on the media and climate change/weather disasters. The keynote speaker will be meteorologist Sam Champion, who will also be the Jessica Savitch speaker.

Kesh Center for Global Communication Innovations: Named after John Keshishoglou, the founding Dean of the Park School, this center (though not really a space) will fund global internships as well as research for faculty and students. It will also bring in international scholars and professionals in residence. Roberto Herrscher, a famed Latin American literary journalist, is currently a scholar-in-residence with the center and will be giving a public lecture on Mar. 8 at 7 P.M. in the Park Auditorium. The lecture is titled “History and Personal Experience as Sources of Narrative Journalism: Why and How I Returned to the Falkland/Malvinas Battlefields 25 Years Later.”