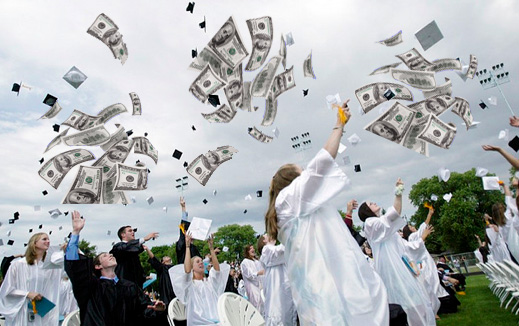 The Ithaca College Board of Trustees has officially approved the tuition for the 2012-2013 school year, upping the current $35,000 price by 4.9 percent. The increase brings the Ithaca College tuition to $37,000. This rate, combined with the estimated standard room and board charges of $13,400, will bring the total sticker price of the college past the $50,000 mark. Overall, it’s a 4.7 percent increase over the 2011-2012 price for tuition, room and board.

An Intercom message from Wednesday morning explains more about the tuition increase, which the college marketing team is sure to emphasize is its smallest tuition hike since 2002-2003.

The Intercom post reads: “In a letter to parents announcing next year’s charges, President Tom Rochon noted that the budget planning process takes into account how best to invest in the human and physical resources that will ensure the college’s ongoing ability to meet the needs of both current and future students. … To provide some context, accompanying the letter is a chart showing the tuition charges for the current year at a group of 20 private colleges and universities with which Ithaca annually compare itself. Ithaca’s tuition for 2012–13 will still be lower than even this year’s tuition is at all but four of those institutions.”

“I believe that the budget we have developed represents our best efforts to control expenditures and to apply the smallest possible cost increase while continuing to improve the already-high quality of an Ithaca College education,” he wrote.