Breaking the Myths of ‘Occupy the Mic’ 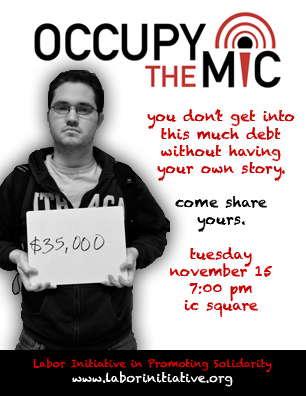 We’ve been covering the Occupy Movement here at Buzzsaw for the past few months, and while it’s clear that many of the protesters have been advocating for an overhaul of the system, some students at Ithaca College are struggling to find a way that the movement directly relates to their lives. On Tuesday, November 15, the Labor Initiative in Promoting Solidarity is looking to address some of those questions with Occupy the Mic, a speak-out event and discussion about student debt, which last year surpassed credit card debt as the No. 1 source of financial debt in the United States.

Here, we spoke with Chris Zivalich, a senior journalism major and a member of LIPS who has been helping to coordinate the event, to destroy some of the myths of why LIPS is organizing Occupy the Mic.

AP: What, generally, is Occupy the Mic about? What’s the goal?

CZ: Occupy the Mic is the opportunity for students to be able to discuss what is normally viewed as a private issue in a public setting — that is, to politicize their issues by bringing it into the realm of politics and saying that no matter what their particular perspective one might have on student debt, the fact of the matter is that it is a political issue. As students who are all involved in that in some way, we need to be able to have a discussion about it. If we just keep it private and closed as something that’s only a part of our individual lives, there’s really no way for us to move forward overall, as a community.

AP: What do you say to people who argue that students with a huge amount of loans and debt are to blame for their own problems? That they knew what they were getting themselves into?

CZ: I understand where the criticism comes from. But the problem is that that really undermines the narratives that really drive our lives. It’s using U.S. culture logic to explain why something’s not a problem, and it’s a way of encouraging us not to talk about it. We’re an individualistic society that assumes that people always do things based on their individual thoughts. Therefore, we can blame them if we think that what they’re doing wasn’t a good idea. By saying that and using it as a way to stop any kind of discussion, you kind of ignore the way that idea puts us into the situation.

If we have a culture that tells us that we can do anything we want as long as you as an individual are solely responsible for your life, then it makes sense why people take on this amount of debt. They assume that they’re going to be OK. They believe in themselves, that they as an individual are capable of getting out of that situation – they have faith in their knowledge and skills to give themselves a job and pay off their debt.

This logic also ignores that people come from different backgrounds. Financial literacy is not common for all U.S. families, and even if it seems obvious that $50,000 is going to cost a lot of money, when you have schools with specific branches with a form of PR that try to convince students that they’re a great school and that they are likely to provide them with financial aid, the students are likely going to get wrapped up into it.

AP: Some people are wary of the event, saying that they think it will just be a bunch of people complaining about their student debt.

CZ: People may pigeonhole those who come to this event as “complainers” and therefore not want to hear it. Someone may say, “Well, I’m in debt, too, so I don’t understand why you have to sit here and talk about it — you’re not special.” But that’s the point. We’re not trying to say that anyone’s special. We’re trying to use everyone’s unique background and history as a way to understand, collectively, what’s a problem for us.

It’s one trillion dollars in student debt at the end of this year. That’s not just a few people who were too stupid to realize how much they were paying for school. It’s a systematic problem. To think that these are people solely making these decisions on their own – and that it has nothing to do with you – is to depoliticize this, to make it an apolitical situation.

This is a part of an overall movement to start questioning our overlal structures  — in terms of money, how we pay for things, what we assume is a right, who we assume is responsible for different kinds of problems.

AP: Another criticism of the event has been this: If the school is too expensive and you had to take so many student loans out to afford it, and you now want to complain about it in a formal setting, why continue going to Ithaca College?

CZ: I’m not sure why people would ever want to be somewhere where they feel that they’re not supposed to be critical of it. If you’re at a school, saying something about it — for example, using this as an opportunity to put Ithaca College into the overall political narrative of student debt and education — is not the same thing as rendering your entire experience at this school as worthless. Ithaca College does have a lot of great things to offer. But being able to talk about student debt and show how Ithaca College is part of that whole is not saying that those things that do make the school great are not important anymore. I don’t want to go to school where I feel like I’m not supposed to critique it. We’re not blaming Ithaca College solely for this.

Occupy the Mic and LIPS are not even saying that this is what you have to think and feel about student debt. It’s just giving people a platform to talk about something that’s always hush-hush. That’s not specifically against Ithaca College.

AP: What do you hope that people take away from the event?

CZ: I think people don’t know what to do because we live in a society that’s so good at keeping every aspect of our lives apolitical or depoliticized. We still live in that idea where religion and politics are not ‘dinner table conversations,’ and that’s something that’s expanded to encompass our entire lives. When you bring up those kind of issues, you’re supposedly being pushy, you’re supposedly being whiny.

The fact that there are so many people in debt, the fact that college is so expensive, the fact that education is still so ‘reserved’ — by having a society that does not have the overall goal of providing people good jobs, we get into this mess of people trying to go to college and higher education to get out of them. It ties into how we organize labor and higher education in general in the United States. There’s a reason why most people try to go to college. There’s a reason why most people are willing – even though they know of the consequences, potentially — to get loans in thousands of dollars to go to school. We have a narrative saying we have to do this. So I don’t see what’s wrong with sharing our own experience with that narrative — that you’re supposed to go to college, that you’re supposed to pay a lot of money for it, and you’re supposed to know how it all works. We’re so unaccostomed to political discourse that’s personalized.

This is all about showing people that their lives are absolutely connected to this in some way. How can you separate your life from the politics that shape it?

Editors’ Note: Adam Polaski is also involved with the coordination of Occupy the Mic. If the lack of objectivity bothers you, read something else.