Humans in the Western world think in binary terms with regard to gender and sexuality. You’re either a man or a woman. You’re either gay or straight. There is nothing in between, and exceptions to the rules are abnormal and unacceptable.

This system has hidden the development of more complex sexualities, restricting them from penetrating cultural consciousness.

While gayness has gone mainstream in the past 15 years, attaining  some cultural acceptance and even some political recognition, other sects of the LGBT community have made less progress. Bisexuals, transgender people and other gender queer individuals are often overlooked, misunderstood or dismissed as “confused” or “in transition.” They are now searching for a way to be heard — a way for their identities to be validated.

Pansexuality, an orientation that encompasses all genders and sexes, is one identity that is often distorted by public opinion. Pansexuals may be male, female, transgender, intersex or otherwise, and they may be attracted to males, females, transgender individuals, intersex people etc. They do not fall specifically within the queer sub-categories communicated within the “LGBT” acronym. Pansexuality looks past the description of the physical body and focuses on the person within. Advocates of the pansexual community often explain that they are attracted to souls, not to bodies.

Pansexuality is often confused with bisexuality. However, while bisexuals are specifically sexually attracted to both men and women, pansexuals are attracted to people without regard to their designation in the gender binary.

Lis Maurer, director of Ithaca College’s Center for LGBT Education, Outreach and Services, said that many Americans are unwilling to acknowledge the existence of pansexuality.

“This is a society that likes to see things in a dichotomous way,” Mauer said. “It’s an artificial construct that our society has imposed.”

In order to completely understand pansexuality, sexual and gender orientations must be viewed as part of a spectrum –– from the perspective that individuals are attracted to men and women at varying levels. Individuals who self-identify as gay yet choose to date someone of the opposite gender are often labeled as “confused.”

Likewise, many seemingly straight people who emotionally or sexually engage with the same sex are dismissed as “bi-curious.” Perhaps the most important characteristic about pansexuality is the rejection of dichotomy when choosing a partner.  The soul is the most important factor in connecting two people, while the physical sex is much less considered. 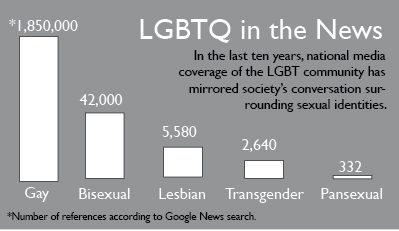 It is clear that the national understanding of pansexuality is still in its infancy. Chris Hennessy, a queer activist and student at Fordham University, has seen little discussion of pansexuality in New York City.

“It’s apparent that media outlets and many national gay rights organizations have failed to address this issue,” Hennessy said.

On a national level, Maurer noted a lack of acknowledgement of these issues. “I am not aware of any coordinated national unified way in which the needs of the pansexual community are being met,” Maurer said. “It’s fear of breaking the binary. Fear and anxiety of the unknown.”

At Ithaca College, students and faculty are beginning to develop a sustained dialogue in order to reach a greater understanding of pansexuality. Campus organizations such as Spectrum and Prism have included pansexuality in regular discussions in order to understand pansexuality and why it is often overlooked. In addition to these student-coordinated efforts, the Ithaca College Counseling and Psychological Services Center offers comprehensive support for students who are questioning their identity or just looking to discuss being “out” on campus.

Pansexuals and those who deviate from normative gender conventions continue to be largely misunderstood. For too many, the idea of overturning the gender and sexuality binary is too daunting.  Student organizations and psychological services are integral in creating a greater national understanding of pansexuality and diminishing the social inequality that gender queer individuals face.

Diane Ehrensaft, a psychologist in Oakland, Ca. who specializes in gender, said, “This generation is really challenging the gender norms we grew up with.”

Ken Robertson is a film, photography and visual arts major who always thinks in spectrums. Email him at kroberts5@ithaca.edu.