How Journalism Used to Really Matter 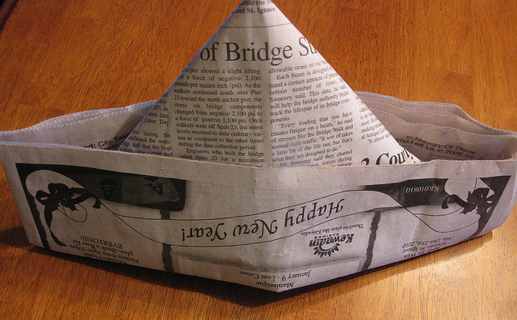 Extra! Extra! Read all about it: Journalism is dead!

OK, so it is my strongly-held belief that journalism is not, and will not become, dead (mostly because it’s how I plan to “make a living”). But as a journalism student and a media consumer, all I’m hearing is that I won’t have a job when I graduate. How am I supposed to believe in the very thing that I support, in something that still exists, when I am told it won’t exist? What happened to the glory days when journalism was important, when people gladly paid to read the news — nay, begged for news.

This ranting is coming from what I will refer to as my weekend love affair with journalism. It started when my apartment rented the movie-musical Newsies, which I had never seen before. This is surprising because it combines my two loves: journalism and dance (and a close third, singing). It was made in the 90s and stars a young Christian Bale as a singing and dancing newspaper boy — a “newsie,” with an exaggeratedly horrible New York accent. He and his cronies, the other young newsies, roamed the streets of New York selling newspapers, or, as they so lovingly dubbed them, “papes.”

It showed the time when everyone — rich, poor, socialites, boxers — read the newspaper. A real newspaper, the kind you can hold in your hands (whatever happened to those?). It was a concept that was so normal and everyday. But imagine a modern New York in which young boys run around screaming that day’s headlines and people scrambling to pull out their two dollars to pay them for the bevy of information that newspapers offer. That doesn’t happen anymore. If it did, the boys would be met with yells of “Stop screaming about Gadaffi, I’m trying to read my iPhone” and “What is that paper with tiny words that you are holding?”

I propose we bring back the newsies. I’ll start by screaming headlines from this week’s newspaper around campus and see what happens.

My “love affair with journalism” continued when I paid a visit to Petrune downtown, where they have issues and issues of The New Yorker from the 50s and onward. I picked up a copy from 1958 and was instantly enthralled with its quaint “old-fashioned” articles and advertisements (is 1950 too recent to be called old fashioned? Probably).

I sat on the floor like a little kid first learning how to read, reading aloud sentences that caught my fancy to my friends, who were just trying to look at records as I begged them to be as fascinated as I was with the stories and, especially, the language in which they were told. Sorry, guys.

Anyways, what really caught my attention was an ad for Newsweek that said this:

Thank you, Newsweek. If only all media could follow that model, including you, present-day Newsweek.

As I was watching Newsies and reading The New Yorker, I was transported to a time when journalism really did matter. Let’s bring that back.