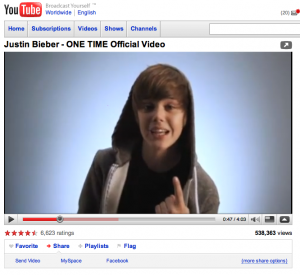 We’ve all seen our fair share of awful YouTube videos. You’ve probably even been part of one at some point in your life. However, these random videos with very poor quality that are only funny and/or amusing to the video makers themselves usually top out at 300 views or so over the course of several months. After that, people looking to post “FIRST” in the comments section of a video that will one day have great success start noticing when a video only has 117 views after eight months of existence on YouTube, rendering it unpopular and irrelevant forever since no one will ever bother to watch it even if the link somehow comes up on their screen.

This is how YouTube works. On the surface, it is a meritocracy. It’s why the sneezing panda has legions of fans and some guy doing a bad Christopher Walken impression gets shunned. But sometimes, like in any societal structure that is supposed to be meritocratic, some great things fall through the cracks (here’s a video of a White Stripes show in 2000 with amazing audio quality, an obviously anxious, high-strung Jack White from before he became a rich rock star and only 938 views) and other awful things gain great success. And I’m not just talking about Justin Bieber and other pop music that sucks but still gets popular. That’s why it’s called ‘pop’ music. We all saw that one coming, although I have to admit I didn’t know until just now that Bieber’s “Baby” is over 650 million views popular.

Anyway, here’s a brief list of awful videos from random sources that somehow managed to get that viewer snowball effect going despite being horrible. As a result, these bad videos continue gaining new, disappointed viewers every day. If you are an aspiring YouTube star, use these as a guide, since following their lead will get you tons of views without having to get grotesquely injured.

Right off the bat, this is Successful Bad YouTube Videos 101. The title of this video sounds extraordinary and unbelievable, so people click on it. And really, that’s pretty much the only rule. So this kid had a friend film him do a single backflip off a 10 or 20-foot ledge and got over 7.7 million people to watch him do it on YouTube.

Some Pissed Off Comments (these prove that the uploader has succeeded. They’re also often hilariously idiotic):

“don’t you ever fucking trick me again.” –

Posted by CASHWOOD 42069, who is apparently on the verge of murdering the uploader.

Posted by regency 1913, a homophobic guy with horrible grammar and an awful attempt at spelling ‘scrawny.’

A poorly doctored photo of an anaconda makes it look like the snake is about 1.5 miles long as it glides through the Amazon. I assume that’s the Brazilian photo shopper’s picture at the end, adding to the weirdness. With comments disallowed and an overwhelming number of dislikes, this video has over 2.6 million views.

I’ve always been convinced that the quickest way to get thousands of YouTube views is to film cats doing things. Here, the cat doesn’t do anything while a spider shows up and they’ve gotten over 727,000 views. Also, notable – the painful banter by the video recorder. This makes me never want to own a cat.

Some Pissed Off Comments:

“I hate when people use cheap lying titles to trick people into watching their lame as video. You advertised Spider Kills Cat, and that’s what I wanted to see.” –

“ZOMG!! i have a cat like that except it got attacked by a dog so it only has 1 eye and a creepy messed up meowing voice..

Posted by DOMOfreak1232, who just made the saddest comment ever that started with ZOMG!!

These kids knew what they were doing when they posted this to YouTube. The title challenges the viewer to watch it – that tends to get you more clicks than a normally titled video. It also looks promising: the thumbnail picture features one kid with a Halloween mask and a pitchfork and another on a trampoline.

Something’s gonna go wrong. But of course, it doesn’t, and instead we all just feel weird for just having watched a couple kids playing in the backyard. But take solace in the fact that 164,888 people have done the same.

>Some Pissed Off Comments:

“Damn it kids, stay in school. Hopefully not film school…. the real kind.” –

Posted by TheMonsterIncTV. Don’t worry, we don’ laughed neither.

Another one I feel weird and annoyed for having just watched. I don’t know what’s wrong with the girl in this, and she doesn’t get stuck in the slide either, although that should be obvious to us when we look at the thumbnail. But tons of people continue to watch it because it has a little over 6.7 million views.

Some Pissed Off Comments:

“thumbs up if you were watching waterslides before this” –

Posted by TheCaitlinWorld, who has received 250 thumbs up for this comment, but this is misleading. If everyone participated on YouTube comment boards, this would include just about every person who’s watched the video, since they’re all referred from water slide mishap videos.

“This is in mexico city. Ive been down that slide. Im not mexican though.” –

Posted by tibsnow, who’s been to every playground in the world and would get offended if you thought he was Mexican.

(Originally posted at Fueled by Scotch. Chris Giblin the former Sawdust editor for Buzzsaw and is a 2011 graduate from Ithaca College)