Why I Hate TOMS Shoes 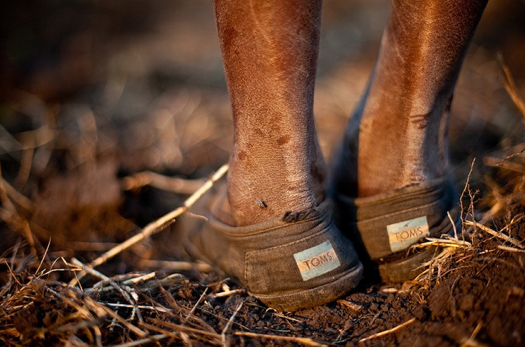 You know what really grinds my gears? TOMS shoes.

OK, I get it. They’re stylish. Even I admit to loving their minimalistic, yet classic, design. In fact, thanks to rewards from my credit card, I’ll even own a pair soon. But I’m tearing off all the damned logos from them, and I’ll tell you why:

People keep forgetting that TOMS is a for-profit company and not a charity. The fact is that similar designer alpargatas sell for around $20 or $25 in boutique shops (I saw them all over the place in Beverly Hills when I lived there earlier this year). With the pair I got (for free) running at $54, TOMS has magically made “buy one for the price of two” a reality. They aren’t taking a cut by donating a pair of shoes; they’re actually making a profit for every pair they donate.

The ‘One for One’ campaign – the premise that for every purchased pair of shoes, TOMS will donate one to “a child in need” – is simply one of the most clever marketing tools of all time. And here’s why: Positioning your company as a charity rather than a profit-making private entity gets you the added benefit that Americans are so massively glad to justify their consumerism as something that it’s not. You’ll see this in the form of student organizations at college campuses all across the United States that urge students to buy TOMS in bulk.

And they do. And TOMS reaps those profits thanks to a marketing campaign that is literally costing them nothing, because we are so eager to write off our consumerism as being beneficial for the less fortunate.

I’ve heard people say that at least TOMS’ business plan is better than not donating anything. But are they so sure? Donating the shoes for free to an underprivileged community is an incredibly, incredibly short term solution (the flimsy design of TOMS shoes in particular only shortens it more). By giving away shoes, it completely undercuts whatever market there might have been in a foreign community, making the communities more reliant on donations. Sorry for sounding a bit like a right-wing nut job there, but I have a better idea for TOMS: Help those local markets by finding a way to allow local craftsmen and merchants to manufacture and sell the shoes, building up the local economy for the future (which also makes them more environmentally stable by cutting down on shipping, and sourcing local materials).

There’s also a lot of classism going on here, with the rich Americans essentially throwing around their money to ‘help’ others; we should be working with these people to build up their communities, not just throwing short-shelf-life donations at them. “Teach a man to fish,” that whole thing.

I could maybe forgive all of this if Blake Mycoskie wasn’t such a massive douche. He refers to himself in interviews as the CEO of a “movement.” No. You’re the CEO of a massively profitable fashion company. You live in Los Angeles. You own a yacht. Maybe if you got off your high horse, you could see that the way you post pictures of underprivileged children in your brochures and stores is a means to exploit American consumers to feel bad and buy your shoes (have you ever heard the term ‘poverty tourism’, Blakey boy?). But I’m sure you already knew that, because it’s all part of what I would consider to be the greatest (and most sadistic) marketing campaign the world has ever known.

So I might wear that pair of shoes when they get here (did I mention I didn’t pay for them?), but I will tear that smarmy little blue and white logo off the back so no one confuses me for someone who thought he was saving the world. I can’t take another day of a peer trying to sell me on the idea that TOMS is a charity. At the risk of sounding like some anti-establishment college student cardboard-cutout, I know better, Mycoskie, and I’m not buying your bullshit. You’re not a savior. You’re not a revolution. You’re a shoemaker. Stick with that. I hope your charade unravels as quickly as my pair of TOMS will.