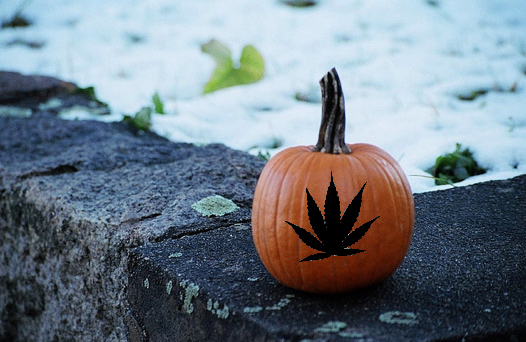 Drugs can be like relationships. And just like relationships, you have your uppers and you have your downers. Trying any new kind of drug is like going on a blind date: It can either go fairy-tale borderline amazing, or “I really want to end my life right about now.” The latter would describe a particularly horrendous experience I had on one dark and cold Halloween night.

Me and Marijuana go way back to the summer of 2007. Our first introduction was an experience that I can only describe as losing my virginity on the first date. Even though we had just met, I knew that I wanted to go all the way. These first couple of romps were a blasty blast. Me and the Mary Jane were two bestest friends. I would have run away with her, left my life and all I knew to live forever in a permanent, off-blue haze.

But even the most intense love affair plateaus.  Though our passionate honeymoon phase wore off, we agreed to continue our relationship; a little more platonic, but still fulfilling and emotionally stimulating. Like Seinfeld.

Or so I thought.

It was October 31st of my senior year in high school. I live in New York City, and every year the Greenwich village hosts its annual Halloween Parade. This was a great place to come on out and let your freak flag fly. Since it was our last Halloween together, my friends and I decided that it would be a great way to cap off the tradition of my annual Halloween party by spending it with the lunatics in the East Village, who, of course, would all be wearing their festive costumes.

The plan was for me and my circus troop of friends, *Emmie, *Cynthia, *Fran, *Lola, and Janet to meet up on Prince Street, where Janet’s brother would be waiting with my friend, good ol’ MJ. The plan was simple. We would take the cross-town bus to the West Side and take the C train to Prince Street, where we would meet up with Janet’s bro. The execution of this plan was appalling. The brother was a complete no-show at the rendezvous point, which resulted in my group bottlenecked in a coagulation of drunk Lowesidas dressed as Summer’s Eve douches and interesting interpretations of Chuck Norris when trying to meet the brother half-way.

The first twinge of uneasy came when we walked to an abandoned skate park to smoke. I should have figured since we certainly weren’t going to be toking up in the middle of the parade, so I rolled with it – pun intended. But I just couldn’t shake this queasy feeling that something wasn’t right.

But, like an emotionally damaged teenager, I self-medicated my instincts with drugs. Perhaps I went a little too far. While my friends Emmie, Fran, and Janet shared a joint among each other, I was huffing and puffing three blunts and half a joint with Janet’s brother and his two random friends. I thought this choice of action would make me relax, but my nervousness only increased.

Within seconds after my eleventh hit, I felt like I had just been hit by the Soul Train. I was feeling uncharacteristically groovy. My eyelids felt like dough and my mouth was like a Louisiana cotton gin. I could barely form a proper sentence and the only thing that was coming out of my mouth was “broooo, oh my god…this shit…oh my god.” I intended on seeing what kind of psychedelic journey this would take me on. Those fantasies were shattered to smithereens when Fran started getting up in my shit about my questionable state of mind.

There are three kinds of people in this world: people who smoke pot, people who don’t, and people like my friend Fran. Fran was the most interesting situation because she was the only person I know who could be a high buzz kill. She was a walking oxymoron. The thing was, she could be a blast sober, but when that THC hit her system, she became an irritating and aggressive know-it-all. She defied the laws of stoner society.

“Dude, you’re greening out man, you’re totally greening out!” was what Fran kept saying to me over and over again after my repeated outbursts of “Guys, I can’t feel my eyelashes!”

“What the fuck are you talking about?” I asked as I probed my eye sockets.

“You’re greening out! Haven’t you ever seen Dazed and Confused?”

I had in fact seen Dazed and Confused, but my rapid mental deterioration was preventing me from recalling any hard facts about anything except that she was really getting up in my grill.

“I don’t know what you’re saying…” I spluttered. My tongue felt like an alien probe floundering around in my mouth. 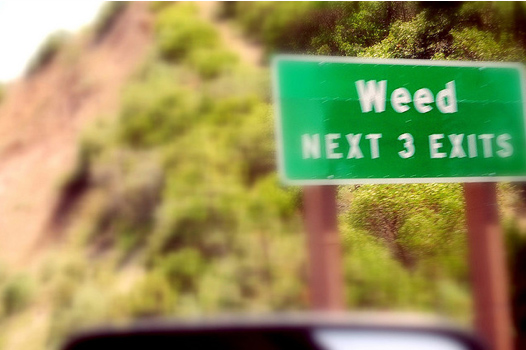 “You’re totally going to pass out – my cousin did, remember that time I told you about in Queens?”

“Urrggghhh…” I couldn’t think of anything else to say. I started to become paranoid about “greening out,” whatever the fuck that was. Am I totally going to be that asshole that flips a shit and ends up pissing herself in an alley corner?, I thought. No, I had to stay strong. I clung to my friend Emmie’s side and we resumed our walk back toward the parade.

Going anywhere in the mental condition I was in was a mistake. When you get as high as I got, the only place you should be is home with slurping down Ben n’ Jerry’s watching Brian Boitano skate his tight little ass off. Walking through the streets of Soho on Halloween night with a full moon and trashed Team Jacob werewolves all around me is the very last place anyone in my circumstance should have been in. And as I floundered onward, things kept getting worse.

We were about halfway back to our rendezvous spot when I began to completely lose touch with reality. Everything began to take on a haze that was similar to looking in a foggy mirror while taking a hot shower. This entire experience turned from a promising affair into a complete Glen Close-Fatal Attraction nightmare. Emmie and Cynthia began to notice my detachment since my eyes were darting about like a frightened horse.

“Are you OK?” asked Cynthia.

It took everything in my power to comprehend what she said and formulate a coherent answer. I’m guessing whatever came out was something along the lines of “not really,” because then everyone in the group went into panic mode. All I heard and saw around me was concerned voices and a flurry of movement. It was making me nauseous and, for a second, I thought I was about to pass out. All I could do was grab a hold of myself and try to find a stable level I could function at.

All of a sudden I felt Fran grab my hand. “DON’T WORRY” she said. “I’LL TALK YOU THROUGH EVERYTHING.” I don’t know if it was me in my delusion or the fact that she too was under the influence, but everything she said came out as loud bellows and screams. “SO DON’T WORRY, YOUR NAME IS SYDNEY AND YOU’RE WALKING THROUGH THE GREENWICH VILLAGE AT THE HALLOWEEN PARADE OKAY? YOU‘RE AT…THE…HALLOWEEN…PARADE, OK?! IT’S HALLOWEEN, THERE ARE VERY SCARY THINGS OUT HERE!”

She then escorted me straight into a mosh pit of people who were standing on the corner watching the floats in the parade go by. I began to feel my chest collapse under panic. There were too many people around me and I began to feel my head spin. All I could think was that Lucy in the Sky could shove those diamonds up her ass, because this was some bullshit.

“Elisa, I…I can’t…here…I can’t” was all I was able to articulate. We then walked a little ways down the block straight into the famous dancing skeleton float. All I saw were flaming, dancing appendages and I was overcome with the overpowering urge to shit my pants. I was absolutely terrified.

To calm my bowels I turned my focus to a pile of garbage and kept it there. I knew that if I turned around something, verbally or otherwise, was going to inappropriately come out of me. I had to get my ass out of this place. But nothing was going to be accomplished if I was all fucked up like this. I had to get my mind right, so I took a deep breath and turned to Fran.

“SYD, THIS IS JUST A PARADE FLOAT. YOU’RE AT THE HALLOWEEN PARADE AND…”

“Fran shut the fuck up!” Cynthia, yelled. “Your screaming is making her freak out even more!” She held out her hand to me. I released myself from Iron Lungs’ grip and gratefully clenched Cynthia’s hand with all I had. I turned to Emmie, who was still holding my left hand. She was staring off into the unknown with a glazed, yet somehow knowing and wise look in her eyes.

We made it back to the subway and I felt myself coming down a little bit. We lost the brother and his posse somewhere along the way, and somehow, we pulled through this whirlwind and ended up where every stoner eventually ends up after a hard day’s night: McDonalds.

After ordering an elaborate seven-course meal, my psychedelic entourage and I popped a squat in one of the corner booths and triumphantly stuffed our faces. Though there was a time during that night that I found it discern the faces of my friends sitting in that corner booth making fun of each other, I did recognize them. I was able to see that great friends, no matter how haphazard a night, can still always come together in a sketchy McDonalds booth and make a great team.