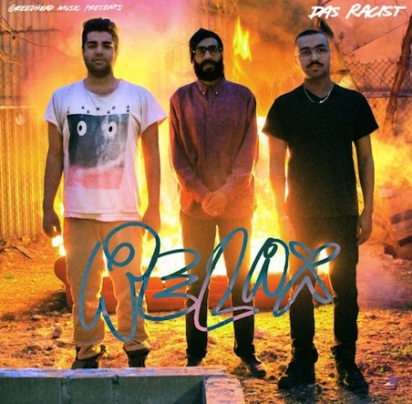 Das Racist, the racially diverse — Indian and Cuban, to be specific — trio from Brooklyn, via Wesleyan College, have been making significant noise on the interwebs since their viral video “Combination Pizza Hut and Taco Bell” appeared on the “goofy YouTube videos” map.

Soon after, they dropped two mixtapes and took everyone by surprise cementing the fact that these guys weren’t doing joke-rap. With Relax, they are seeing if their strange hybrid of rap, comedy, weed and commentary on the current state of hip-hop is worth $12.

Relax features producers from the likes of El-P to Rostam Batmanglij of Vampire Weekend fame. This eclectic mix of producers delivers loud, gritty beats that will at times leave you wondering if you are in the jungles of India battling aliens and cowboys. Our friendly neighborhood brown-skinned rappers respond with lyrics that will make you want to rewind the track over and over again (you might also want to Wikipedia the obscure references they often make).

On Relax, Das Racist parodies themselves and hip-hop, while at the same time confronting racial and ethnic stereotypes. All of this to dance beats whose catchiness will catch you off guard. Some songs have the trio taking on personas of tough guys who are “fucking good at rapping” like on the albums single “Michael Jackson,” while others poke fun at, basically everything like the synth-pop, pseudo strip-club anthem “Booty in the Air.”

While the obscurities and the inability to accurately define Das Racist may be a barrier for some, there is no doubt Das Racist are filling a certain kind of niche in the rap game. They do this all with a grace and lightheartedness, making sure that they never take themselves too seriously. And neither should we.