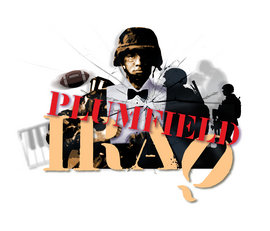 Ithaca College’s Theatre Department kicked off their fall season strong with Plumfield, Iraq, a sobering play showing the horrors of the Iraq War overseas and at home. After the 10-year anniversary of September 11, the performance struck even more emotional chords as the glorification of war by the media was stripped away, leaving only the personal story of Mike Herring.

Mike, played by senior acting major John Gardner, is a compassionate and endearing high school graduate from a small town in Washington called Plumfield. Mike and his best friend Cam, played by senior Musical Theater major William Boyajian, enlist in the Iraq War two years after it starts in order to put themselves through college. The play not only touches on the power of their true friendship, but also the effects of their enlistment and experience on all their family members, friends and loved ones left behind.

Gardner’s performance as a soldier dealing with Post Traumatic Stress Disorder (PTSD) was hypnotizing. His facial expressions and body language accurately portrayed emotions of self-hatred, distance, loneliness and sorrow. He brilliantly bounced between memories of pre-war happiness and post-war devastation with the snap of a finger. The chemistry between Boyajian and Garnder was heart-warming and adorable. Boyajian stole the show with his portrayal of the fun-loving, outgoing and goofy Cam. Boyajian had the audience eating out of the palm of his hand – they laughed with him and cried for him. Every line and every word had meaning, power and raw emotion. Each performer should be proud of the art created within this production, but Boyajian gave it that extra sparkle, taking the show and the audience’s experience of the show to a whole new level.

Also giving a fantastic performance was senior acting major Elizabeth Lee Ellson in her portrayal of Lorraine, Cam’s love interest. Ellson fully embraced the strong, determined and beautifully spirited character. Her charisma and natural chemistry with Boyajian left a smile on my face I could not refuse. Mallory Newbrough, senior Musical Theater major, also displayed some of the highest quality acting within the show, jumping back and fourth between four extremely different characters within seconds. It was simply perfection.

Plumfield, Iraq is filled with beautifully sentimental and touching moments intertwined with those that are heart-crippling and tragic. The difference of one second could take me from smiling ear to ear, to choking back tears. The memories and flashbacks that make up the play are meant to exemplify the blurred lines between citizens and war. This play suggests the two can never be truly separated.

Director Cynthia Henderson knows this too well. Throughout the play, there was an incorporation of multimedia through video, but also actual photography from the Iraq War. Henderson’s sister, a combat photographer, took these photos. The multimedia element was extremely effective, reminding audiences that this is a harsh reality part of their own lives.

Henderson also made an interesting choice with regard to music in the play. The script called for a barbershop quartet, but Henderson wanted a more soulful a cappella vibe. She had the group even sample some songs from the fittingly-named R&B group Boys II Men – a journey very familiar to the main characters.

The scenery and props were simplistic but effective. It included a raised platform stage, seven cardboard boxes and a broken glass panel directly above the platform — perhaps symbolizing the shattered lives war creates.  The lighting was spot-on on, critical to setting the mood in the war zones especially. The sound and props crew should also be commended, especially for their special effects in recreating explosions and gunfire.

Playwright Barbara Lebow forces us to consider the physical and psychological losses of war. The cast and crew of the college did just that in this production, leaving me with a pit in my stomach and thoughts of war I just can’t forget.

“As we live our lives today, always looking toward tomorrow, this reminds us why we do what we do,” said the Director of Theatre Lee Byron in the play’s program.

I highly recommend everyone to see Plumfield, Iraq, which closes this Saturday. Not only is it a way to support the college, but also it completely reshapes your entire outlook on war – the one overseas and at home.