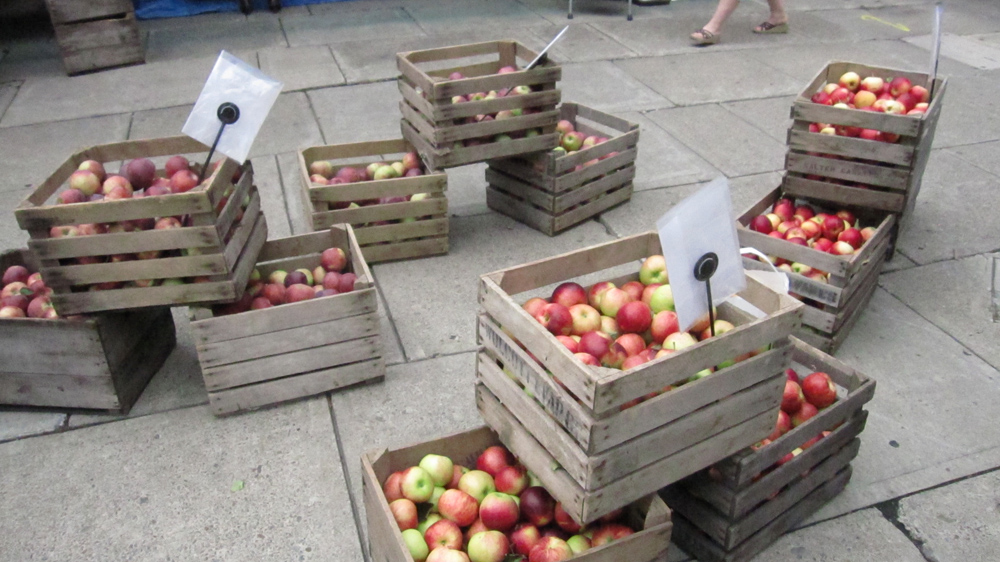 Although I’ve spent three years as a student at Ithaca College, I feel that I don’t truly understand the city of Ithaca — “10 Square Miles Surrounded by Reality” — in the same way that the rest of my friends do. I’ve never gotten around to doing many of the key things that are considered Ithaca favorites — partly because I don’t have a car and partly because I’m too cheap to spend money on public transportation. I’ve never been to the Factory Gorge, I’ve never eaten at Purity Ice Cream, I haven’t gotten a chance to go to the Farmer’s Market, I’ve never really made an effort to go apple-picking, and it was only earlier this semester that I went hiking at Buttermilk Falls State Park.

Despite my relative inexperience with Ithaca, I still feel that the Honeymoon Period hasn’t ended yet. There’s so much to explore and look into during my senior year.

And yet, I can still take pleasure in one of the few events I’ve made a point of attending every year since I first came here: The Apple Harvest Festival. An annual autumn celebration of everything that is quintessentially Ithacan, Apple Fest has been a dive into the gorge of local businesses and artisans, progressive organizations, artists an musicians, student groups, and endearingly eccentric local color. This year was no different, despite the less-than-ideal chill that permeated the Friday afternoon air. I’m still getting to know Ithaca, but every Apple Fest is a chance for me to better understand the community.

It shouldn’t surprise anyone to hear that Apple Fest was characterized by an abundance of apples. Always eager to try new things, I got a recommendation from one of the apple vendors to try Jonagolds, a cross between Golden Delicious and Jonathan apples. Its light sweetness and crisp flavor make it a great apple for snacking. Although I didn’t wash it down with a cup of hot apple cider, I did purchase a bottle of Bellwether Hard Cider, based out of Trumansburg. It has a nice sparkling kick that’s not too intrusive. For a sweeter sampling, there was an incredible fudge stand on Cayuga Street, where I happily devoured pumpkin- and coffee-toffee- flavored candy.

Indeed, Ithaca is well-known for its diverse array of world food and restaurants, and Apple Fest was no exception to this culinary diversity. Walking through the Commons I saw numerous stands and kiosks vending everything from hot dogs, apple cider and donuts, barbecue, Indian curry, gourmet sandwiches, gyros and souvlaki, fry bread, “Chinese-Vietnamese Authentic Food,” kettle corn, a particularly lonely-looking lemonade stand, candy apples, and fried dough, among others. If Apple Fest is meant to embody everything that is characteristic of Ithaca, it has always captured the rich diversity of cuisine in the city. And would it be Ithaca if there wasn’t a compost station as well?

Environmentalism isn’t the only form of promoting change you will find in this city. As a hotbed for progressive politics, Ithaca’s social spirit is most readily visible at Apple Fest. The IC Student Group Food For Thought held sign-ups for Walk for Plumpy’Nut, a 5K in order to raise funds to fight starvation in malnourished African countries. Likewise, the Tompkins County Public Library had a stand exhibiting all of their community programs and services for students and residents. The library used its forward-thinking pursuit of knowledge and cultural preservation to highlight nonprofit organizations, such as the Ithaca Motion Picture Project, “committed to preserving and celebrating Central New York’s Silent Film History.” This month, the IMPP are presenting an exhibition entitled Romance, Exploits & Peril, an eight part retrospective look at historical Ithacan films partly sponsored by the library. I’ve made a note to self to check out one of these presentations while they are still in effect.

Although I couldn’t look into every exhibition at Apple Fest, part of the joy was immersing myself with the locals who flock to the Commons every year, especially artists and musicians. An older gentleman playing the accordion sprinkled his set with vaguely familiar pop songs, and an acoustic guitar player improvised lyrics over strummed chords as his female companion accompanied him on harmonica. (He sang “Thank you Mister” as I dropped a few dollar bills into his guitar case.) There’s always the joy of running into old friends or meeting the colorful people that comprise the student-friendly atmosphere of Ithaca.

This year’s Apple Fest was bittersweet for me because it will be my last as a student at IC. I envied my friend Carin Pracht, who just began her freshman year here, for getting the chance to experience her first Apple Fest with wide-eyed wonder. She told me in an email, “[I] had such a fun time at Apple Fest and enjoyed getting a chance to see what the people of Ithaca are all about. It was a great event to interact with not only Ithaca and Cornell students but also local artists and entrepreneurs in the community and see their amazing talents. I believe I have started a tradition of my own in getting an “Apple Sundae” compete with caramel sauce and whipped cream! My goal will be to get one every year.”

I hope Carin the best in her discovery of everything Ithaca, and I’m glad to hear that Apple Fest served as a catalyst of cultural immersion for her the same way it did for me. I’d raise a glass of hard cider to that!