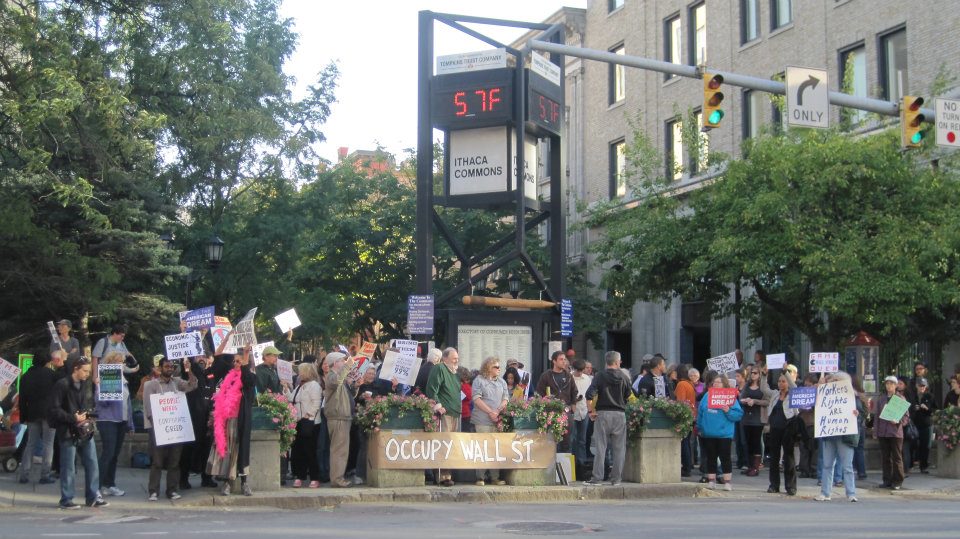 On Wednesday, October 5, Ithaca residents gathered for the Occupy Wall Street solidarity rally at the Bank of America Alley entrance to the Commons. The crowd, which was estimated at about 250 at one point, mainly consisted of members of the working class and were mostly middle-aged, although it ranged from college students to senior citizens. The Facebook event had been created by the Tompkins County Workers’ Center.

Cars passing through the intersection honked to show their support, each time met with cheers from the crowd as they raised their signs.

Standing in the crowd at the rally for some time was Ithaca mayoral candidate Svante Myrick, who at times could be seen lightly mouthing the chants.

Bill Goldsmith, a professor in the department of City and Regional Planning at Cornell University was among the speakers who addressed the crowd. He said the Occupy Wall Street protests are only the “tip of the iceberg” in the movement to take back the country from the top one percent. 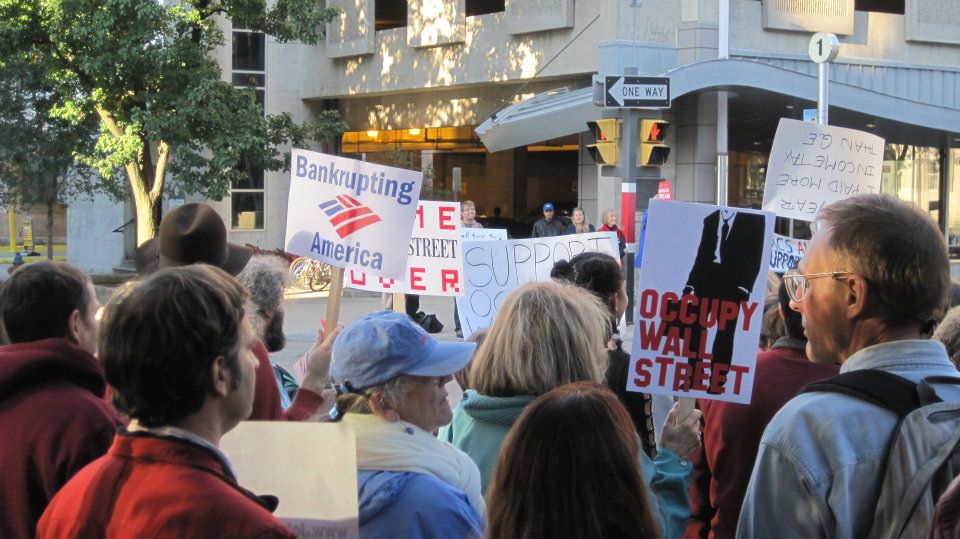 “What I want to suggest, is if you look at the numbers, you’ll see that [the wealthy] have been stealing from us for 40 years. People get paid less. You’re here on the bottom 90 percent, maybe 95 percent, maybe 99. And people in that very top one percent or one tenth of a percent or two or three percent take it all home everyday, and they use it to influence legislators, people who run for office [with] campaign donations, so that we never get our say,” Goldsmith said to the crowd.

Fil Eden, a recent Cornell graduate who was formerly a work-study student at the worker’s center and member of the Cornell Organization for Labor Action, was also among the event’s speakers. He refuted claims that the movement is “leaderless,” “directionless,” and does not have “clear demands.”

“We put a lot faith as progressives in leaders, in our elected officials, and in President Obama to get things done, and if there is anything the last two years have taught us, it’s that we cannot put our faith in these leaders. We need to put our faith in ourselves and in this movement,” Eden said to the crowd.

He likened the Occupy movement to the protests in Tunisia, which, though leaderless at the beginning, launched a revolution for democracy and human rights.

“We might not have one leader. We don’t have our Doctor King yet. We don’t have one thing that we want,” Eden continued. “We want a government thats supports us, that supports the 99%, and we need to take our faith back and put our faith in ourselves because we are the only ones who are going to make this happen. So thank you guys for being here and we’ll see you every week.”

Eden was among a number of the speakers who spoke of coming back each week.

For more photos from the rally, check out all of Gena Mangiaratti’s shots.