Home MagazineNews & Views It’s the End of the World As We Know It – Or Is It?
News & ViewsSeptember 11 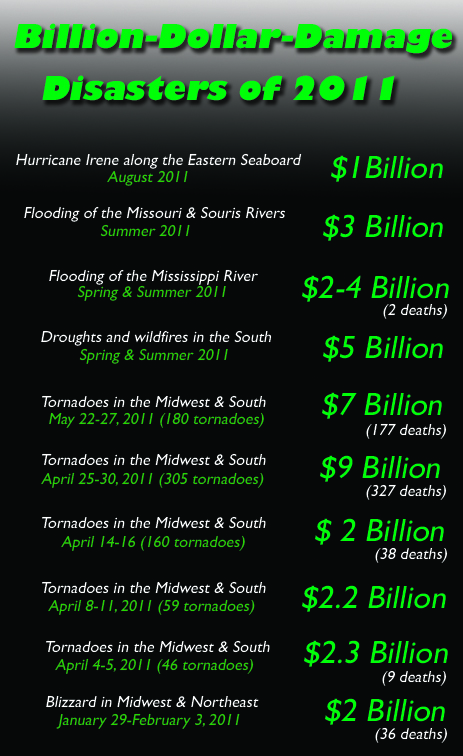 As recorded by the National Oceanic and Atmospheric Administration: Monetary estimates are as of August 2011 (Graphic by Adam Polaski)

The string of natural disasters that has plagued the United States in the past few months has some legitimately wondering if this is indeed the end of the world.

Since May, the United States has sustained over $15 billion in damage from natural disasters, according to the National Oceanic and Atmospheric Administration. These figures don’t account for the increasing costs of Hurricane Irene, Tropical Storm Lee and several wildfires, from which the country are still trying to recover.

Many of the most recent natural disasters have been in the Midwest. The deadly string of spring tornadoes and summer wildfires were especially hard on the Midwest residents and landscape. Yet most Ithaca College students will only recall the kink that Irene put in their lives the last weekend in August since it hit the Northeast during Move-In Weekend. While the college saw nothing more than the wind and rain of an average storm, many students’ hometowns were affected by the tropical system.

Freshman Justine Gray, who lives in Cranford, New Jersey, missed most of the Fall Welcome because of flooding in her town caused by Irene.

“I moved in Tuesday at 2 o’clock because we didn’t want to leave until we had a generator,” she said.

Many houses were without their own generators, so there were cords strung across the streets connecting several houses to the few available generators. Gray also said that her street had been spared much of the damage because it was more elevated than the next street over, which she compared to a “raging river.”

Nevertheless, damage was inevitable. “One house, you could only see about a foot of the door,” Gray said. “And another house collapsed because of the water pressure.”

While the Northeast suffered from far too much rain between Irene and the remnants of Lee, many regions of the Midwest and South fell instead into a crippling drought. Since the fire season in Texas started in November 2010, with the peak of the season occurring in April and May, local fire departments and the Texas Forest Service have tracked over 22,000 fires that have burned over 3.6 million acres, according to the Incident Information System.

The region also experienced a series of tornado outbreaks during that time, which caused over $22.5 billion in damage, including two EF-5 tornadoes that struck Joplin, Missouri and northern Alabama. Just a few days shy of Hurricane Irene’s landfall in the Carolinas, a 5.8-magnitude earthquake struck in central Virginia, and while no major damage was sustained, residents from the East Coast to Missouri felt tremors. 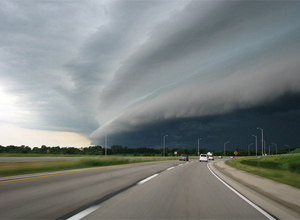 The combination of seemingly relentlessness and outstanding circumstances of the series of disasters is what makes these events such a concern for some. Out of the 10 natural disasters so far in 2011 that have cost over a billion U.S. dollars in damage, five of them were tornado outbreaks that scourged the South and Midwest this spring, and four of those occurred in April alone.

The Virginia earthquake in late August came as a shock to the East Coast because of the sheer rarity of tectonic activity in the middle of a plate, and while hurricanes do ride up the Eastern Seaboard, a direct hit on the Northeast is also rare.

Ron Denson, an Ithaca College professor who teaches an honors seminar on the 2012 apocalyptic theory, said, “The effects of Hurricane Irene were so devastating because when Irene passed over the water by New Jersey, it was much warmer than usual,” a theory proposed by 350.org campaign leader Bill McKibben, among others.

The increase in natural disasters in recent years has had scientists questioning the involvement of global warming and human involvement by association. At the 2009 University City London’s Climate Forcing of Geological Hazards conference, reports were presented that explained how increasing atmospheric temperatures create a cascade-type effect of natural disasters; for example, as the ice caps in the Arctic melt, it will change the amount of pressure applied to the land in this volcanic area and increase the likelihood of an eruption. Glacial shifts and melting were also contributed to the increased chance in flooding and mudflows in the Alps and tsunami risks in both the Atlantic and Pacific.

Many people with strong spiritual backgrounds offer an alternate explanation for the natural disasters.

Minnesota state representative and presidential candidate Michele Bachmann told supporters during a rally in Florida in late August that God was using the natural disasters as a way to warn politicians to start listening to the people of America.

Holly White, a lecturer in the Ithaca College philosophy and religion department, explained that such evangelical beliefs explain natural events in such ways in order to gain audiences and trust with a political force not found in other groups.

In addition, even though the mythical floods of the Ancient Near East established the idea that “God punished the wicked and preserved the righteous,” the more common spiritual response today is one of compassion; “people donate, say prayers for the dead, and help others rebuild,” she said.

The occurrence and severity of natural disasters fluctuates from year to year; throughout history, the earth has experienced several cycles of ice ages and global warming, flood and drought, and many events just cannot be predicted. Only time will tell what the climatological future has in store.