Home Buzz Blog Troy Davis: The Eyes of the World Were On Georgia
Buzz BlogNews & Views

Troy Davis: The Eyes of the World Were On Georgia 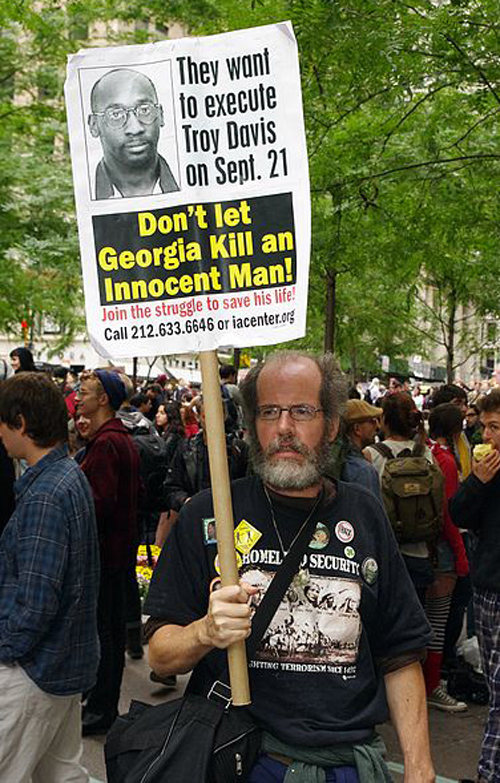 Protest of the Troy Davis Execution

September 21 is the International Day of Peace, and from now on, it will also be the day Troy Davis, a man widely considered to be innocent, was executed by the state of Georgia.

In my Diversity Club in high school, we would make cards and mail them to imprisoned human rights victims around the world. Some of them were journalists, some were artists, and some were simply victims of a corrupt regime who found themselves at the wrong place at the wrong time. Troy Davis was one of those people, which is why I was surprised to see his name being mentioned in the news late last week. His execution had been stalled in years past, but this time all of the major media outlets were reporting that his death was being officially scheduled. When the Georgia Parole Board , a judicial term meaning lenience or mercy, the news spread quickly.

At 7:05 PM on Wednesday, Sept. 21, five minutes after Davis was scheduled to be put to death, the Supreme Court granted a stay. Sadly, this flash of hope lasted only a few hours. The Supreme Court later denied his stay, and the execution went forth as planned. Troy Davis was executed by lethal injection at 11:08pm on Sept. 21, 2011.

I was surprised to find myself weeping the moment I learned he was executed. This was a man I never met, a man I knew very little about other than what the news media put out, and yet I felt great sorrow, as if I had been wronged. There are so many ways I shouldn’t be able to empathize with his struggle, and yet I truly felt compassion for him. Should I be weeping? Do I really have any clue what kind of hell he has gone through?

For those of you who don’t know the background of the case , it is a classic example of racism, as well as of the fatal systemic flaws embedded in our judicial system. In 1989, a Georgia cop named Mark MacPhail was shot dead at a Burger King parking lot in Savannah, Georgia. Four days later, Davis was implicated by a witness and arrested. Two years later, Davis was sentenced to death on Aug. 28, 1991, in the state of Georgia, where he would sit on death row for more than 22 years.

Eyewitness testimony is the weakest form of evidence in a court case, and it was all that the prosecution had against Davis. Seven of nine witnesses would later retract their statements, some of them claiming they were coerced by police to blame Davis. As the years went on, more witnesses came out and said it was actually someone else. Time and again, his lawyers would request for a new trial, but one was never granted. Davis would eventually garner the support of the Pope, Jimmy Carter, Al Sharpton, Jesse Jackson, and human rights supporters around the world.

After the execution, Davis’ lawyer, Thomas Ruffin, referred to the execution as a “legalized lynching.” The United States is the only country in the Western Hemisphere to still practice the death penalty as a legal form of punishment. While there have been many controversial death row cases over the years that have brought the practice under harsh scrutiny, the case of Troy Davis has stood out as a particularly shameful example. Our judicial system is flawed on many different and often convoluted levels, but the death penalty is – without any doubt – an inherent injustice.