Photos: The Challenge of the ‘Adirondack 46’ 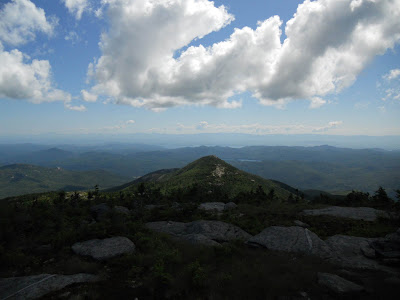 Images by Jackie Keating (Slideshow Below)

As any resident from upstate New York will tell you, there is much more to our state than one of the world’s most well-known cities. Perhaps the most divergent example is the Adirondack Park: the 6-million acre forest reserve that was deemed “forever wild” in 1894.  Under Article 14 of the state constitution, the entire park is protected from commercialization and destruction of wildlife, making it one of the most beautiful and pristine areas in the northeastern United States.

The most popular trailhead in New York, which is owned by the Adirondack Mountain Club (ADK), is located about 15 minutes from Lake Placid (site of the 1932 and 1980 Winter Olympics). The region is known across the country for its 46 high peaks, all of which are theoretically above 4,000 feet (the last four were measured incorrectly due to poor equipment, although they are still considered part of the criteria for becoming a “46er”). While working for the ADK this summer as an educator in the High Peaks Information Center, I made it my personal goal to do half of the 46.

Thanks to overnight trips on days off and dedicated friends who were willing to hike down mountains with headlamps if we had time to cross another off the list after work, I was able to summit 25 of the 46 Peaks this summer, including the 3 highest (Mt. Marcy at 5,344 feet, Algonquin Peak at 5,114 feet, and Haystack at 4,960 feet). Peaks such as Phelps, Wright, and Tabletop, are more easily accessible from the ADK property, and were hiked more than once as training for some of the longer, more challenging trips. The following photos were taken on these various hikes, and demonstrate just a small part of the beauty that the Eastern High Peaks Region has to offer.