For The Love Of Dracula!

Vampire: a preternatural being, commonly believed to be a reanimated corpse, which is said to suck the blood of sleeping people at night.

Obsession: the domination of one’s thoughts or feelings by a persistent idea, image, desire and so on. 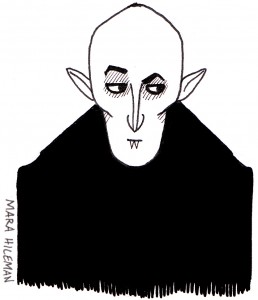 If we put these two together we can say teen America has fallen prey to the vampire obsession (the domination of these preternatural beings that suck blood) … again.

This sudden craze has left many people shell-shocked and overwhelmed, yet in actuality this should be no surprise. These undead, blood-sucking creatures have entranced the population for centuries. This time around, however, it is just in the form of glamorous movie stars whose faces are plastered over every gossip magazine in the country.

Does anyone remember Dracula by Bram Stoker? It could be known as the most famous vampire reference in history, containing details that have become Vampire Knowledge 101 (Transylvania, Van Helsing, Count Dracula, etc).

Throughout, vampires are described as being feared, merciless and ultimately evil characters that don’t possess the morality that has somehow infected the undead beings of today’s media obsession.

Even with the German film adaptation, Nosferatu, Count Dracula is pale with a cape and dons the cliché fangs you can now buy for a dime at your local convenience store.

The combination of fantasy and brutality can be said to have opened up an escape for the youth that became entranced in the charm of vampires, so much so that some even believed they were members of the undead.

Take the Wendorf case of 1998, for example. A tragic tale of the death of Richard and Ruth Wendorf of Eustis, Fla. After successfully “turning” the couple’s daughter, Heather Wendorf, 16-year-old Roderick Ferrell and his small vampire cult finalized initiation by beating her parents to death before fleeing to Louisiana, where the group of teenagers was captured by the police.

Ferrell was once a common citizen that became too involved in the imaginary world of vampires (including the popular role-playing game Vampire: A Masquerade), so much so that he became nocturnal and changed his appearance to resemble a vampire. He even had his own vampire name, Vessago, to further detach him from reality and his human persona.

The stereotypical gothic view of vampires is only a small branch of this obsession. Since the success of Dracula, vampires have become more humanistic, and what is more human than an insatiable sex drive? 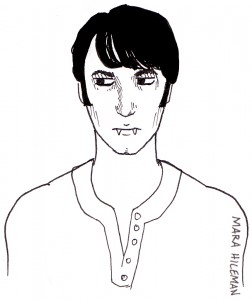 With books such as Anne Rice’s Interview with a Vampire, the creatures were given something new: sex appeal. Even today with popular hits such as True Blood, vampires are seen to be alluring creatures who have the added b

onus of being masters in bed. In fact, there are dozens of blogs, web pages and even Craigslist adds dedicated to the sexual side of vampires.

With such paraphernalia jumbled all over the web, is it so shocking to hear stories of people who claim to have actually dated “vampires”?

There are articles littering the Internet educating the public on the truths of dating vampires. Unlike the fictitious Edward Cullen from Twilight, these so-called vamps are “real.”

In one article online, the storyteller describes her boyfriend and his followers by saying, “they would regularly drink blood from each other and spend a lot of time discussing the unique powers they had, such as being able to read minds, auras and call each other using only mental abilities.”

It continues with how the “vampires” would use rusty razorblades and form significant bonds with their “donor” (the person allowing the vampire to feed off of them). Clearly this is not how most would want to spend their time with their boyfriend.

So with these kinds of reputations and affiliations, how did the fad find its way into the home of young children? Shows like The Addams Family, The Munsters and even Sesame Street (the Count) can be accredited with this.

The neighborhood-friendly vampire approach seen in these classic television programs is frightening enough to make the vampire costume a must-buy at any Halloween shop, but friendly enough not to turn the young away from the phenomenon forever. In fact, it could be argued that the early exposure to the undead creatures made youths more susceptible to the vampire craze now.

Currently, one cannot go a day without seeing some sort of vampire-themed event—whether it’s a trailer for the newest vamp-flick or a separate section in the bookstore dedicated to vampire literature (which might as well be its own genre). Of course, today’s current vampires (and fans) lack viciousness associated with the craze of the past. Vampires have gone from gothic to glamorous, looking as appealing as possible for the public eye.

So what’s in store for the future of these undead creatures? Will they stay on the PG track they have assigned themselves to presently, will another Buffy come along, or will they just sit on the backburner for a while? The fascination with vampires has lasted for hundreds, even thousands, of years, and it doesn’t look like they’re going anywhere. There’s no way to beat them, so society might have to settle for joining them.

Catherine Fisher is a freshman journalism major who regularly shares her blood with friends and family. E-mail her at cfisher1@ithaca.edu.

Streaming and the Rebirth of Cable

You Don’t Have Tik Tok?

Once Upon a Time… In Hollywood

RAW FROM THE SAW – Song Review: everything...

Can the NFL Inspire Change?