The Ritual Of Television

For better or worse, television is one of the most enduring cultural touchstones of modern life and society. From short-lasting shows like Firefly, Wonderfalls and Pushing Daisies to long-lived programs such as The X-Flies, The Simpsons and Buffy the Vampire Slayer, fervent fans build them into not just great forms of entertainment, but parts of their lives.

But why the devotion? Why do some people care more about what is happening in the love triangle of Lost’s Jack, Kate and Sawyer than in the lives of their real, physical friends and family? Television as a weekly program, a constructed world and a character-driven medium makes it especially easy to connect in an incredibly primary way.

“I have to say that’s happened to me, even as somebody who studies television,” says Cyndy Scheibe, associate professor of psychology and Director of the Center for Research on the Effects of Television. “For me it was Hill Street Blues and The West Wing.”

Yet Scheibe also understands why this happens. She notes how viewers feel a close relationship with the characters as the show goes on, becoming more and more familiar with them. This is called a parasocial relationship.

While films are also subjected to obsessive fans, television characters lend themselves even more to these types of parasocial relationships due to the very nature of television. Developing stories and characters over the 22 or so episodes that make up a season of television means the characters slowly change and grow in the way real people do. The Bluth family of Arrested Development was a conniving, self-interested group of people who didn’t act like heroes but reacted to ridiculous situations as many real people might. 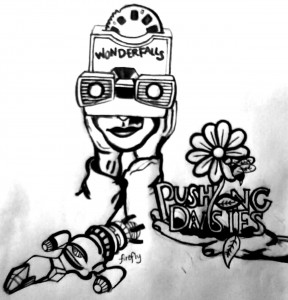 Julie Blumberg, assistant professor in the cinema, photography, and media arts department, observes that this is exactly what makes shows so emotionally connective.

“Unlike cinema, character development in television shows is very much like human development,” Blumberg says. “Characters don’t change all that much, and the changes they do go through are very much like what we go through. So I think that people identify with the characters. [They] feel more real to them.”

Senior integrated marketing communication major Jessie Yuhaniak, an avowed television nut, loves to rewatch her favorite shows because it’s an escape. “[Watching] TV is my own personal time away from reality.”

“There’s an attractive fantasy element where these characters are living out kinds of dreams that you might want to live out,” says Blumberg, “and I think we get very vested in that.”

While in some ways watching television is very personal, there is often a social aspect that adds to the sense of community. Blumberg finds that the way television brings people together on a weekly basis makes these cult shows resonant even more and aides to the devotion held by fans.

“You get together and are like, ‘Oh my God, did you see this?’” says Blumberg.

Scheibe also notes that there are deeper personality traits that fans of certain shows share.

The development of DVDs made becoming thoroughly obsessed with shows even easier. The X-Files, one of the most successful cult shows of all time, became the first ever television series to release a season on DVD in September, 2000.

Thinner and with more storage capacity than VHS tapes, DVDs enabled those who were already fans of shows to immerse themselves in the series, obsessing over every minute detail and steeping themselves in bonus materials.

More importantly, DVDs let anyone experience and develop an obsession with a series.

“Whenever I’m sad I’ll just throw in a disc of Gilmore Girls because it makes me happy,” says Yuhaniak. “And it’s just nice to be able to watch it without commercials and without having to wait a week. Multiple viewings allow for viewers to catch plot details they missed or to appreciate the little bits of a joke over and over. Having the ability to watch them again and again just lets me appreciate them more.”

Connecting with a show—with the characters, with the amazing situations they find themselves in—may not be the most rational relationship to have, but it is certainly an incredibly meaningful one.

Anne Gould Northgraves is a junior cinema and photography major who can’t be pried from her Golden Girls DVD collection. E-mail her at anorthg1@ithaca.edu.