“It was one of those things where you felt like you were watching from the outside, like it wasn’t really happening to you.” These are the words of Stevie Marshall upon discussing his traumatizing experience at the Ithaca Mall last week. Stevie was unfortunate enough to be confronted by every teen’s worst nightmare: his mother in Victoria’s Secret. “I think he’s going to be okay,” said Stevie’s friend Ben Lee, who was also present during the difficult events of the day.  “Times like these are tough, but Stevie’s a strong guy and he’ll get through this. But damn, I wish I could’ve seen Mrs. Marshall in some of that lingerie. What a milf.”

The boys explained the innocent moments leading up to what Stevie claims to be “the most humiliating moment” of his life. “We were just killing time at the mall, and we always walk by Victoria’s Secret,” Ben explained. “I mean, we’re teenage dudes, there’s stuff to see, you know what I mean?” But what the boys clearly did not expect to see was Mrs. Marshall strolling out of the establishment carrying multiple bags filled with her mysterious purchases. “I don’t even want to know what was in the bags,” Stevie said. 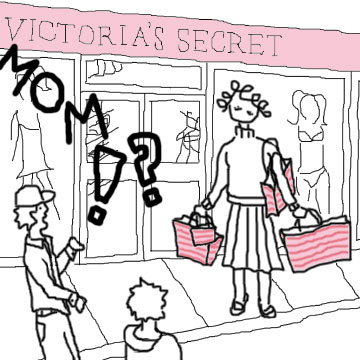 Upon further investigation, it has been discovered that Mrs. Marshall has very few friends or family that would use products from a store such as Victoria’s Secret, therefore drawing us to the conclusion that all her purchases were, in fact, for her own use. According to next-door neighbor John Wood, this doesn’t come as a complete shock.

So, is it wrong for middle-aged women to embrace the products that Victoria’s Secret is well known for? For Stevie, there is no question.

“Dude, she’s my mom,” he said. “She shouldn’t even be in a place like that. I mean, she’s not that old, but when you have a kid my age, you shouldn’t be in that kind of store and you definitely shouldn’t be buying their stuff.”