“No, you lift from the bottom and I’ll pull it up.”

“Wait, what if we lay it down on its side and then I push it up?”

“Make sure nothing falls out. I want these books the same way dad had them.”

The whirr of a vacuum punctuates the conversation as the brother and sister assess their predicament. There is a small patch of tan remnant carpeting between the door and the short flight of stairs leading up to the landing—a small but god-awfully awkward place to move a bookshelf filled to bursting.

At the top of the stairs sit three bedrooms and a bath. As though ticking the redecorating off a checklist, the room that curves to the left sits in stark brightness, freshly painted and steam-cleaned, housing little but two naked mattresses, a standing lamp and a window AC unit pumping out cold artificial gusts.

Back on the staircase the two have finally found an acceptable strategy with which to move the sagging plywood shelf. Barefoot and lacking in moving expertise (beyond that learned in a basic high school physics classroom, anyway) the oldest sister lifts the front end and carefully avoids smashing her toes beneath its weight.

“TLA? What does that mean?” The voice comes from the middle sister, gangly with teenaged youth and curious as a cat as she peers onto the top of the bookshelf where the letters are scribbled in stale but shimmering nail polish. It comes at her like an uncertain battering ram as her elder siblings heave it up the carpeted stairs. She’s crammed into the doorway of her own bedroom, which butts almost directly against that of her only brother.

“True love always. Must have been mom; dad never would have written that.” With a final shove from the oldest sister, the shelf sits horizontal once more. The brother, as though undeterred by the effort, begins at once an attempt to pull the shelf upright into its natural position. 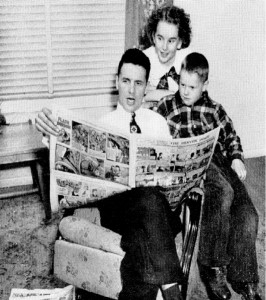 “That corner there,” says the older sister, her breathing labored as she pulls her light hair into an effective, albeit chaotic, bun on the top of her head. Her arms dance with her sun-streaked hair and pull at the straps of her tank top, one of which is held together precariously with a gold safety pin. “It will fit there perfectly.”

The shelf is set upright with caution, yet bargain-bin books spill from it like stones to a stream, falling haphazardly to the ground. With the push-me-pull-you fashion of a two-man saw, the shelf finally finds its new home in a wash of cool celery green and a nest of burgundy shag rug.

With multiple trips down the stairs come knickknacks of all varieties. The oldest sister’s fingers dance across the shelves as she places each item just so, replicating their home on the shelf as she sees fit from memory: a black and white photo of buttons framed by a fake stalk of pinecones; Regal cinema ticket stubs laying haphazardly flat on their backs staring up at the shelf above; an old harmonica.

Each with a thousand meanings—or no meaning at all. They act merely as all memories do, bringing life to what has now passed from the present.

A fourth party enters the room in the form of the youngest sister—seven and persistent as Chinese water torture (in a loving way, of course).

“Can I play the harmonica?”

It is difficult to say from whose mouth the negative response comes; the eldest two continue their replication of the shelf as though uninterrupted.

“Why not?” Persistent as ever.

“Because it’s sacred.” There is at once both humor and complete sobriety in the words that echo through the still-bare walls.

“It is not sac-red,” responds the young girl with an air of someone not to be trifled with.

“Yes it is.” End of discussion. They all know this, and the little one flounces over to one of the bare mattresses and begins to jump.

A trip back down to the old bedroom reveals another quest, one at once both trivial, yet far more significant than moving books—the search for the mysterious gun. Previously unknown to the children, their father had owned a pistol—an old Western-style pistol which he occasionally untucked from its hidey hole and polished with a soft sheet (probably a washed-out tie-dye, a fad from which his eldest daughter had yet to outgrow). Yet it was never used for anything but a novel glance and feel, a secret returned each time to its secret home.

The oldest brother and sister had convinced themselves that the gun would reveal itself in the form of a hollowed-out, dusty old tome whose presence in the house seemed misplaced; yet the ever-varied collection of books made deciphering this mystery almost impossible. From volumes on human physiology and the mysteries of the English language, all the way to the comedies and tragedies of Shakespeare, their father’s seemingly never-ending stacks of books only increased the possibilities for the location of a hidden firearm.

At this point the move is only partially complete; three shelves remain to be transported upstairs. To move the shelves is to move a life—not away, but back once more into plain sight after a year of gathering dust, to be reborn into adolescence that which has grown dusty with disuse.

A second, smaller shelf is transferred—this one sturdier than the first, upon which it is stacked. The brother stands and stares at his handiwork—a lifetime’s worth of reading stands before him waiting to be discovered anew, acting at once as both memorial and torch to his father’s eccentric collection habits, keeping all memories alight and paving the way toward an easier future.

The older sister returns to the bedroom after dragging yet another shelf from its previous home. It snags softly and almost unnoticed on the rug, as did the others—and as do their hearts—as piece by piece the room is filled and the celery walls covered.

A return trip to the old room yields a maze through life’s current state, not pretty or dainty but completely lived. A chaos of love and comfort radiates from the tangled sheets of a king-sized waterbed; a nightstand elongated with the aid of a wooden plank houses the youngest daughter’s latest affinity for pretty pussy willow that sits dry in empty glass vases.

Two more shelves remain, one on top of the other, shoved neatly into a corner. An awkward struggle ensues to remove one from the other, connected from years of gravity’s grateful push. The brother and sister again take opposite ends, leaving the two youngest girls to themselves who, having followed them back downstairs, now float idly in a sea of blankets while the cable flickers in the dim room, a soft murmur of advertisements distracting them from the moving.

“Grab the top and I’ll take the bottom.”

A muffled hysterical laugh and squawk of desperation comes from the plywood backing of the moving shelf. The sister struggles to gain a firm grasp on the shelf as her face is currently plastered to its backing. The shelf tips precariously until her desperate need for help with its weight is granted as the brother takes hold of the bottom and releases her from the complete burden.

They clear a path to the door, zigzagging between a pile of clean yet wrinkled laundry and a shockingly teal thrift store table lamp residing unlit upon the floor. With a start and a soft inhalation, the sister knows almost preternaturally what is going to happen; the plywood backing, upon which the entirety of the shelf’s books lie, begins to give, and with a sagging sigh releases onto the floor in a mysterious heap of mismatched literature and letters.

“God, I knew that would happen,” comes the sister’s own sigh with a small chuckle curling the edges of her lips.

“Do you think the pistol’s loaded?”

The abrupt change in topic (though really there was hardly a conversation to begin with) comes with no surprise or confusion.

Dear Lord, let’s hope not, she thinks, but only responds with an uncontrollable silent shutter of laughter that leaves her abdomen aching and her face contorted.

The bout of hysteria ends and she reaches toward the fallen books, not even attempting to sort them into anything resembling order. With a small ache of regret and an overwhelming sense of loss, she cradles a pile to her chest, filled with both books and a handful of letters, mixed into the stack like feathers placed in an eccentric flower arrangement. Yet she knows for whom they were written—addressed to her father two Marches ago with return addresses ranging from Maryland to Michigan.

The fallen shelf is eventually carried up the stairs and placed with the others in hopes of finding a home among them; yet its tilted parallelogram shape leaves it broken and without purpose, cast aside to watch its former inhabitants take residence atop the other, more reliable shelves. As shelf space becomes limited, paperback towers form on the floor, their bases cradled by burgundy carpet fibers.

The youngest sisters, having been recruited for book carrying assistance, sit once more upon the bare mattresses as the beloved books find new homes in the crevices of an old life. Again the brother stands and takes in the sight of his new room, filled now with life and the lingering memories of times gone by. His eyes trace over each shelf, meandering down and around, taking in what is now his.

“I like it.” With a blink of his eyes and accompanied nods from his sisters, the brother smiles, satisfied for the moment.

In the now-quiet house lies a pregnant pause, broken only by the soft sound of country music floating from the kitchen radio and a low murmur as the mother sings along. The youngest daughter hops up and leaves the bedroom, sensing something the others have missed in their distraction. Tromping down the stairs and along the hallway, she runs her hands upon the walls tacked with maps, hitting slight speed bumps where places have been marked—their home along the state border and the oldest daughter’s college.

The silence is slowly ripped from the house: first only slightly by the low rumble of a car engine and the low growl of tires over gravel; then by a howl from the dog—a tiny white Shih Tzu who goes running toward the front door.

The storm door’s knob turns and opens from the outside, letting the soft summer breeze make its way down the hall and up the stairs, ghosting into the bedroom and swirling with the cold air conditioning, sending a collective warm chill down the children’s spines and settling in their chests.